iSoftBet is back with another trip to the lost American civilization in the Aztec Gold: Extra Gold Megaways slot. This sequel is playing using a 6 reel machine where the number of ways to win can get as high as 117,649. Gameplay highlights include mystery transforming symbols, cascading reels and an Aztec Gold Cash Respins feature. This streak respin can also deliver jackpot prizes worth up to 1,000 x stake. The Extra Gold element means that you can increase your stake by 25%. In return, you’ll only need 4 rather than 5 scatters to trigger the Cash Respins bonus. Does this sequel stack up against the popular original? Find out in our full Aztec Gold: Extra Gold Megaways review.

Click on the coin to the right of the reels to adjust stake sizes. Stakes range from 20p to £25 per spin. In some countries, Autoplay is also available which allows for automatic spins.

The Aztec Gold: Extra Gold Megaways RTP is 95.98% which is just below average. The volatility here is very high. It comes with a hit frequency rate of 31.2% meaning just under a third of spins will give you a winning outcome. The maximum win is 21,417 x your total stake per spin. 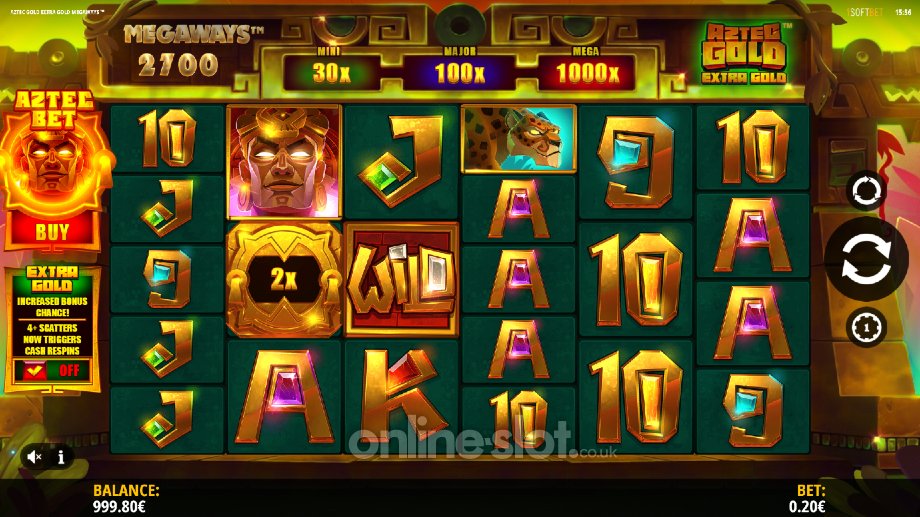 The design in the Aztec Gold: Extra Gold Megaways is terrific. With an Aztec theme, the reels are set within an Aztec temple.  The imagery here could come straight from a TV animation. It’s glossy and very high end.

Likewise, the rhythmical soundtrack that’s punctuated by blasts of pan pipe and cries from the jungle. It comes together superbly to deliver loads of atmosphere.

Joining the gold A to 9 royals are cartoon-style birds, snakes and leopards. The Aztec chieftain is the top standard symbol. Land 6 of these in combination for an award of 50 x your total stake. There are also wilds, scatters and mystery transforming symbols.

You can try and land some of the hidden Aztec riches whether you’re playing on a computer, tablet or smartphone. This is a slot we preferred to play on a bigger screen, just to take in the impressive design. The Aztec Gold: Extra Gold Megaways mobile slot is perfectly playable though.

Like most slots that use the Megaways mechanic, there’s plenty going on in Aztec Gold: Extra Gold Megaways. With 7 bonus features, you’ll find standard features like cascading reel wins and mystery transforming symbols as well a rather more innovative feature round. There are also a series of randomly triggered modifiers.

Aztec Gold: Extra Gold Megaways uses a Cascading Wins feature. After a winning combination hits, winning symbols are removed from the grid and new ones drop in to replace them. A new payout calculation follows. The cascades keep on coming until no new winner is formed.

The Aztec pyramid is the mystery symbol. All examples of these that land on the same spin morph into the same symbol and a payout consideration is made. This is called the Mystery Symbols feature. 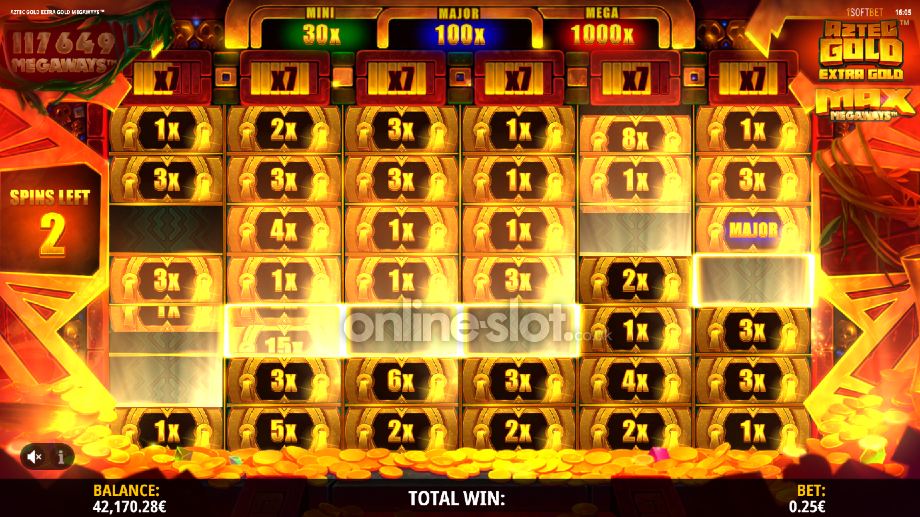 To trigger the Aztec Gold Cash Respins feature, you’ll need to land 5 Sun Disc Scatters on the same spin. Those scatters are held and 3 respins are awarded. If a new Sun Disc Scatter lands, it too locks in place and the respins reset to 3.

If you fill all the positions on a reel with Sun Disc Scatters, it brings a multiplier into play. This is applied to all the scatters on that reel. Each scatter comes with a multiplier value attached. When you’ve used up all your respins, the multipliers are added together to give you a final prize.

As well as Sun Disc scatters, you could also see Mini, Major or Mega Jackpot symbols. Land one of these during the respins and you’ll win the associated prize:

In some territories, players have the option to buy the Aztec Gold Cash Respins feature for a fee of 100 or 150 x your total stake. Called the Aztec Bet feature, the higher fee combines the Cash Respins with the Max Megaways modifier. This means 7 spaces per reel will appear. This isn’t available in the UK though.

Activate the Extra Gold feature and you’ll only need to land 4 rather than 5 Sun Disc scatters to trigger the Cash Respins feature. It increases the cost of each spin by 25% though.

Aztec Gold: Extra Gold Megaways comes with 3 modifier features. All triggered randomly, here’s what each of them entails:

The Aztec Gold: Extra Gold Megaways slot is superbly designed. This sequel has a lot more bonus features than the original Aztec Gold Megaways. Compared to the original, there are the 3 random modifiers which spice up the base game.

However, there’s not enough differentiation to make it a standout Megaways slot. For that, I would play Kingmaker Megaways from Big Time Gaming which has 5 reels and gives you a potentially more lucrative Free Spins feature the more you build the gem multipliers in the base game.

The Aztec Gold: Extra Gold Megaways RTP is 95.98% which is about average. High variance, this jungle adventure comes with a hit frequency rate of 31.2%.

The most you can win play this game is 21,417 x your total stake on each spin. The biggest opportunities come in the Aztec Gold Cash Respins feature.

How does the Aztec Gold Cash Respins feature work?

The Aztec Gold Cash Respins feature gives you respins. The aim is to collect Sun Discs which come with stake multipliers which are added up and won at the end. There’s also 3 fixed jackpots to be won worth up to 1000 x stake.

What are the Modifier features?