The Ghost Glyph slot is a Quickspin powered game and is played on a 7x7 grid. Using a Cluster Pays mechanic, you can spin away from 20p a spin on all devices. With a ghost theme, you head to an old haunted house. It comes with tumbling reels and Ghost Glyphs which give you wilds. If part of a win, it brings 4 Ghost Urns into play which apply on non-winning tumbles. These transform and upgrade symbols as well as add wilds and trigger the Bonus Game feature. Here, you fill the meter to climb the levels. This will add a massive wild up to 3x3 in size on your last free spin.

Where to Play Ghost Glyph Slot

The Ghost Glyph slot is played on a 7×7 grid and uses a Cluster Pays mechanic. Winning combinations are formed by landing 5 or more matching symbols that are adjacently connected.

Playable from 20p to £100 a spin, the Autoplay function allows up to 1,000 autospins. The Advanced settings button allows you to use loss and single win limits. If you fancy, you can play using Turbo Mode (button to the left of the spin button).

In terms of volatility, Ghost Glyph is a medium to high variance slot and classed as 4 out of 5 by Quickspin. With a hit frequency of 31%, you’ll get a win in nearly 1 in 3 spins. The max win is 2,260 x your total stake. 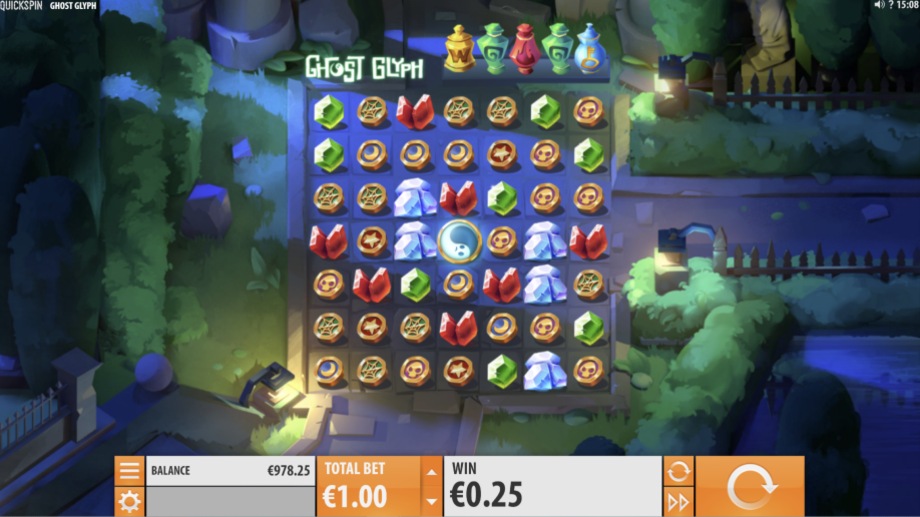 The Ghost Glyph slot has a ghost theme. With a light hearted feel, it’s quirky and not terrifying in any way. Movie wise, it’s more Casper (the ghost) than Paranormal Activity. With an old haunted house as the setting, it focuses on ghosts who have their own abilities, quirkiness and characteristics.

With soft visuals and a tongue in cheek soundtrack, symbols include low value star, moon, skull and web coins. The 3 higher value symbols are represented by gemstones. The diamond symbol is the most valuable with 15 or more giving you 600 x your total stake. There is also a gold wild which substitutes for all symbols except the Ghost Glyph.

The 7×7 grid works very well on mobile and tablet devices. The Ghost Glyph slot can of course by played on desktop devices.

The Ghost Glyph slot has 7 bonus features. With tumbling reels, a win will give you a Ghost Glyph which acts as a wild. When part of a win, it gives you Ghost Urns which apply on non-winning spins. These transform symbols, upgrade symbol, add wilds and trigger the main feature. In the free spins, tumbles fill the Paranormality Meter which give you 2×2 or 3×3 massive wilds on your last free spin.

When you form a winning combination, any symbols that part of a winning cluster are removed. Known as the Tumbling Reels feature, the empty positions are filled with new symbols falling from above. This simply gives you another chance to win again. The tumbles keep on coming until no more new wins are created.

The Ghost Glyph feature is available in the base game and free spins. When you get a win, a Ghost Glyph is awarded in 1 of the empty spaces before the tumble. With 1 Ghost Glyph awarded for every tumble, it’s a 1×1 wild symbol which substitutes for all symbols.

If a Ghost Glyph is part of a winning cluster, it activates a Ghost Urn. If a blue urn is triggered, all unused Ghost Glyphs transform into wilds if no new Ghost Glyphs appear on the tumble. 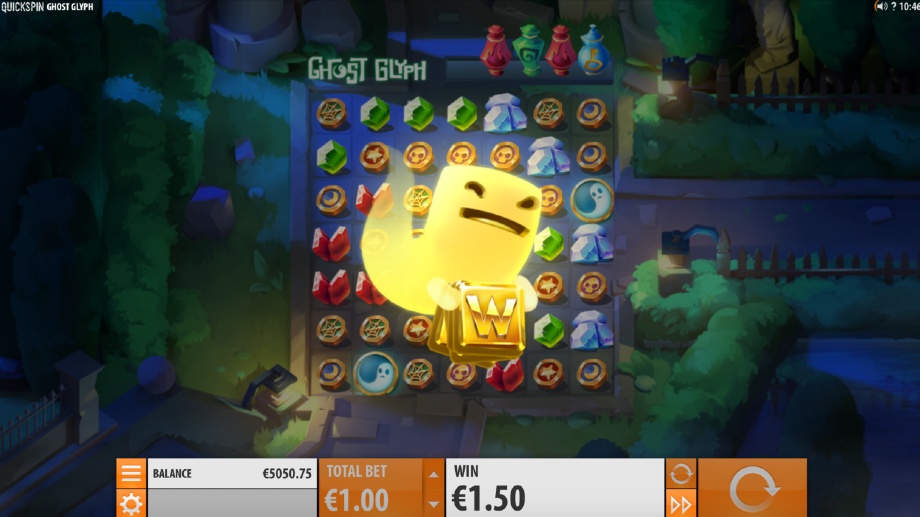 Before every base game spin occurs, 5 Ghost Urns are randomly chosen and show above the grid. The one on the far right is a Blue Urn (has a key on it). When you don’t get a winning combination, any activated Ghost Urns are triggered in the order they appear. Here’s what they will give you: 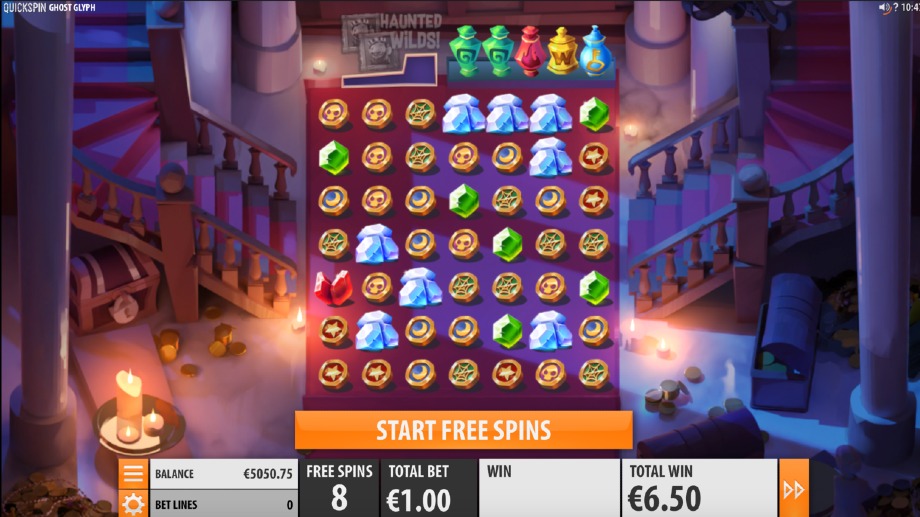 The Bonus Game feature is triggered when you get a Blue Ghost Urn. With 8 free spins awarded, every winning combination/tumble increases the gauge of the Paranormality Meter.

8 tumbles fill up the gauge completely. When full, the Massive Wild feature comes into play. This comes into play on your last free spin if you’ve reached level 1 or higher. These massive wilds are 2×2 in size at level 1 and 3×3 in size at higher levels.

On levels 1 and 2, the massive wilds are removed when part of a tumble. If you reach level 3 to 22, the 3×3 colossal wild moves around the grid and doesn’t disappear following a win. Filling the meter as many times as possible will see massive wilds appear on the reels. At level 3 or higher, the 3×3 massive wild roams around which increases your chances for bigger wins.

The Ghost Glyph slot is well designed and has plenty of bonus features to keep you entertained. The Ghost Urn features come into play constantly with the Yellow Ghost Urn feature the most lucrative as up to 10 wilds can be added to the grid.

In the Bonus Game feature, the key is to fill the Paranormality Meter regularly so you play with massive wilds that can reach 3×3 in size. Having them roam around the grid is what you want for the bigger payouts. This will only apply on your last free spin which is a shame.

However, this is a game to play if you want plenty of features and light-hearted fun. Quickspin’s Golden Glyph slot also uses a 7×7 Cluster Pays mechanic but is harder-hitting and offers 13,185 x stake wins on each spin. If grid slots are your thing, The Demon Code slot by NextGen Gaming has a darker theme and much bigger potential payouts per spin.

What is the Ghost Glyph RTP?

The Ghost Glyph RTP is 96.18%. With most wins coming in the base game and Ghost Urn feature, the bigger wins will come in the Bonus Game feature due to the massive wilds.

What is the Ghost Glyph max win?

The biggest possible win from the Ghost Glyph slot is 2,260 x your total stake. This is more likely to land in the Bonus Game feature as massive wilds up to 3×3 in size come into play. You can expect a win every 3 spins on average (31% hit frequency).

What are Massive Wilds?

In Ghost Glyph’s Bonus Game feature, filling the Paranormality Meter with 8 tumbles will see the Massive Wild feature come into play. On your last free spin, the massive wilds can be 2×2 or 3×3 in size. If you reach level 3 or higher, the 3×3 massive wild moves around the grid with each tumble until you no longer get a win.

What is a Grid slot?

A grid slot, like Ghost Glyph, offers an area where symbols tumble from above. A win is formed by matching symbols adjacent to one another in a cluster formation. With each win, winning symbols are removed allowing for new symbols to occupy the empty spaces. This allows for successive wins until no more new wins are created.