Try and discover the treasures of a mighty Egyptian pharaoh in the Tomb of Akhenaten slot. This volatile 5 reel, 243 ways to win game from Nolimit City combines high class sound and visuals with some potentially explosive gameplay. Land a winning combination to trigger the Sticky Win Spins feature. These respins play out on expanding reels that can offer up to 3,125 ways to win. Reach the limit of the Sticky Win Spins to bring pyramid wilds into play which turn whole reels wild and turn single wilds into doubles. There’s also a free spins feature where each Sticky Win Spin increases a multiplier by 1. With potential 26,261 x stake wins, find out more and dig into our full Tomb of Akhenaten review.

Where to Play Tomb of Akhenaten Slot

Each spin on the Tomb of Akhenaten slot begins on a 5 reel, 3 row, 243 ways to win machine. To create a winner, land 3 or more matching symbols or wilds on adjoining reels, starting from reel 1. Each win brings the Sticky Win Respins into play. We’ll look at these in detail below.

You can start this Egyptian dig at bet levels that range from between 10p and £100 per spin. There are options to set between 10 and 100 autospins if required, complete with win and loss stop limits.

The Tomb of Akhenaten RTP is 96.09% which is about average. The variance here is very high though. On a scale of 1 to 10, we’d put the Tomb of Akhenaten volatility at about a 9. The maximum possible win is a massive 26,261 x your total stake per spin. The hit frequency rate of 26.21% means on average, you’ll land a win about a quarter of the time. 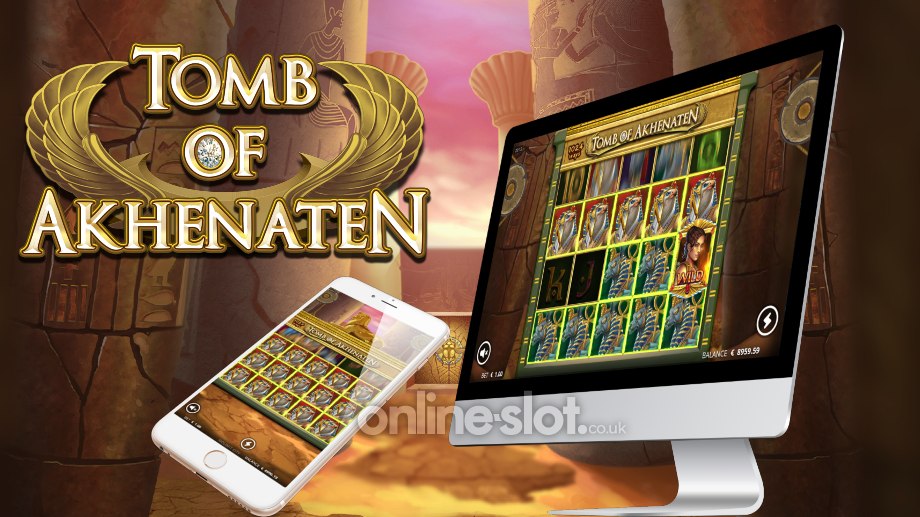 With an ancient Egypt theme, the sound and visuals in the Tomb of Akhenaten slot are superbly done. The imagery is bright, colourful and packed full of ornate detail. It is based on the Egyptian ruler (Akhenaten) who was the husband of Nefertiti and the father of Tutankhamun.

The game is actually the sequel to the Tomb of Nefertiti slot. There’s a haunting and rather eerie backing track playing while you spin. A mighty thud heralds each expansion of the reels. You’ll find plenty of atmosphere exploring this ancient pyramid.

The reels are flanked by pillars etched with hieroglyphs. On them, you’ll discover A to 10 royals, higher value Egyptian animal gods, a Lara Croft-style adventurer which is the game’s wild and Akhenaten which is the bonus symbol.

The lush visuals described in the previous section are present in the mobile and tablet versions of Tomb of Akhenaten as well as on the bigger screen desktop play. The expanding reels work just fine on a smartphone or tablet too. This is another impressive mobile release from Nolimit City.

You’ll find some unusual extras in this archaeological dig, starting with the Sticky Win Respins that expand the reels. They in turn can deliver pyramid wilds which can turn whole reels wild. There’s also a free spins feature with an expanding multiplier. 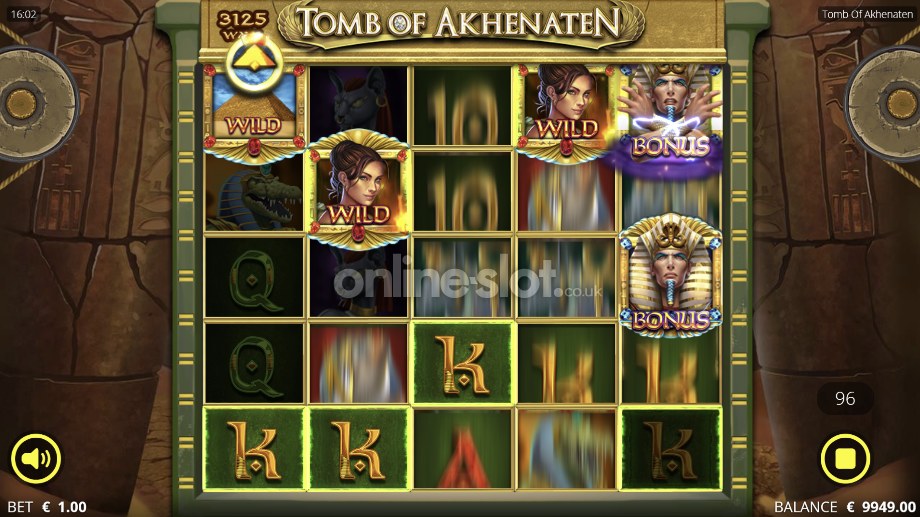 The Sticky Win Spins feature is triggered every time you land a winning combination. You’ll receive a respin with 1 extra row added to the game grid. This in turn increases the number of ways to win.

If you land another matching symbol on that respin, that symbol is turned into a wild and another respin is awarded with an extra row. Fully expanded, you’ll have 5 rows and 3,125 ways to win active:

The Pyramid Wilds feature has the potential to become active when the reels have expanded to their maximum size. You’ll see a red pointer spin around pyramids at the top of each of the 5 reels. If the pointer lands on the summit of the pyramid, it turns the whole of the reel below wild. If there’s already a wild in play, it turns into a double wild and counts as 2 symbols. 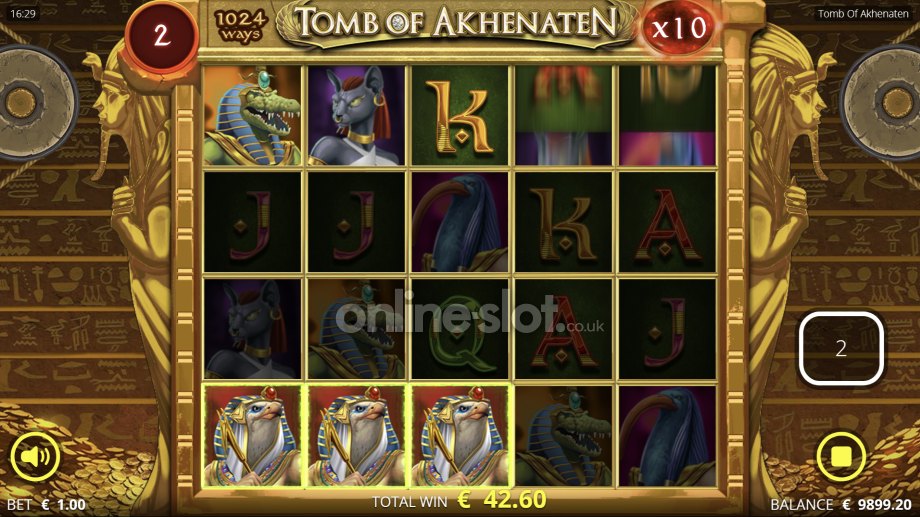 The Sticky Win Spins feature is active during the free spins just like in the base game. They come with a little extra attached too. Each time you land a Sticky Win Spin, a multiplier increases by 1. It doesn’t reset at the end of the respins either, it keeps on rising throughout the feature. Each bonus symbol that lands during the Akhenaten Spins adds 1 extra free spin to your total.

In some territories (but not the UK), you’ll have the opportunity to buy the Akhenaten Free Spins feature. This will set you back 65x or 105x and in return you’ll receive 8 or 12 free spins.

Tomb of Akhenaten Review Summary – all about the Sticky Win Spins

This latest trip back to the land of the Pharaohs is a very playable one. You won’t find many better looking and sounding Egyptian-themed games than Tomb of Akhenaten.

The gameplay offers some originality too courtesy of the Sticky Win Respins and pyramid wilds. However, it’s all about the Akhenaten Spins feature with the increasing multiplier. The multiplier is the key to huge wins.

This desert adventure can be a hot as the Saharan sun when it comes to volatility so proceed with care. If you enjoy slots with the ancient theme, Tomb of Akhenaten is worth exploring. Yet again Nolimit City has delivered another superb slot which adds to the excellent portfolio.

Alternatively, Book of Ra Deluxe by Novomatic is a simpler, yet potentially rewarding, trip to the land of the pharaohs.

What is the Tomb of Akhenaten RTP?

The Tomb of Akhenaten return to player rate is 96.09%. The action in this ancient treasure hunt is very high on the variance front. It comes with a hit frequency rate of 26.21% which means over a quarter of spins will give you a win.

What is the Tomb of Akhenaten max win?

With the volatility sky high, it compensates with big potential wins. The max win is 26,261 x your total stake per spin. The bigger wins will come in the Akhenaten Spins due to the increasing multiplier.

Are there any Tomb of Akhenaten free spins?

Yes, the Akhenaten Spins feature starts off with a minimum of 8 free spins. Each time you land a Sticky Win Spin, the multiplier increases by 1 with no limits. You can also benefit from extra free spins and up to 3,125 ways to win.

What are Sticky Win Spins?

The Sticky Win Spins feature is triggered whenever you land a winning combination. A respin follows on reels with an extra row added. Fully expanded, they offer 3,125 ways to win. You can also bring pyramid wilds into play which turn whole reels wild.