Awaken your inner punk without the need to put a safety pin through your nose in the Punk Rocker slot, an anarchic and highly volatile xWays game from Nolimit City. The action starts on a 5 reel, 243 ways to win machine but the xWays mechanic can take the ways to win up to 46,656. There are plenty of opportunities for action here courtesy of mystery symbols that expand the reels, expanding wilds, respins that unlock a sixth reel and a pair of free spin bonuses with wild extras and plenty of modifiers. Payouts can reach the 15,072 x stake mark. Find out more in our full Punk Rocker review.

Where to Play Punk Rocker Slot

The base game action in the Punk Rocker slot plays out on a 5 reel, 3 row, 243 ways to win machine. There are opportunities to take this up to 46,656 as you’ll discover shortly.  To create a winning combination in this xWays slot, you need to land the same symbol or wild on 3 or more adjoining reels, starting from reel 1.

Stake levels here range from 25p to £100 per spin (the latter for the high rollers). There’s a Lightning Speed mode for faster spin speed. There’s also an Autoplay function where you can choose up to 1,000 autospins with balance loss limits. These may not be available in your country.

The Punk Rocker RTP is 96.01% which is standard and average. The hit frequency rate is under 1 in 5 spins. You’d expect a slot with a punky theme to be a volatile one and this doesn’t disappoint. The volatility is very high, coming in at 9 out of 10 on the variance scale. It comes with a potential maximum win of 15,072 x your total stake from a single spin. 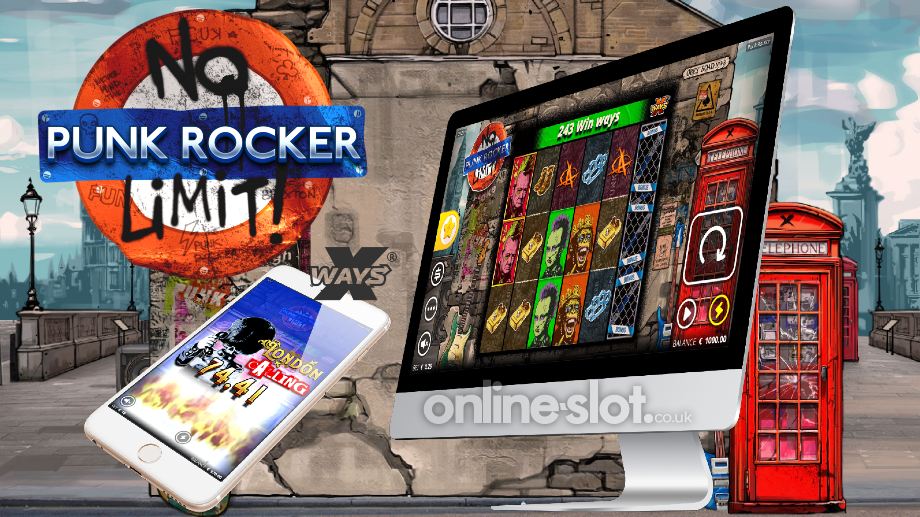 The Punk Rocker slot has gritty, pop art-style imagery and takes you to London. Reminiscent of Sex Pistols’ Johnny Rotten, it has a punk rock theme. With the famous Big Ben landmark, a red phone box and an Obey Road NW8 street sign (meant to be Abbey Road), it’s visually quite full on to match the anarchic feel.

You’ll hear a grungy, punk soundtrack in the background while you spin which will get you pogoing along.  Overall, the design is top-notch as ever from developer Nolimit City.

On the reels, you’ll see bovver boots, a knuckle duster, a Molotov cocktail, a mixer switch and an anarchist logo. More lucrative are the faces of Sean Connery, the Mona Lisa, Einstein, a monkey and Winston Churchill, all of whom have been given a punky, pop art makeover. Churchill, sporting a mighty mohawk, is the best paying symbol. Land 3, 4, 5 or 6 of these in combination for an award equal to 1, 3, 6 or 20 x your total stake.

These character symbols can all benefit from the xWays Mystery Symbols and expand up to 20 symbols high. The skull biting a Molotov cocktail is the wild. When this symbol lands, all the symbols directly above turn wild too (i.e. expanding Molotov wilds). There’s also a scatter symbol.

Nolimit City has upgraded the Punk Rocker mobile slot, making it easier to adjust bet sizes. The gritty visuals and wide variety of volatile features are available whether you’re playing on a computer, tablet or smartphone.

The raucous design in Punk Rocker xWays is matched by the gameplay which offers plenty of explosive variety. Feature highlights include mystery symbols, expanding wilds, respins and a pair of free spin features.

Central to much of the best action in Punk Rocker are the xWays symbols. These special symbols can hold between 2 and 4 matching symbols which then expand on their reel. Known as the xWays Mystery Symbol feature, these expansions increase the number of ways to win.

The punk characters are especially explosive, expanding up to 20 symbols high. When fully expanded, the game engine here offers 46,646 ways to win. The xWays mechanic is also used in the Dragon Tribe slot (by Nolimit City).

As mentioned, the skull taking a bite into a Molotov cocktail is the game’s wild symbol. As usual, this substitutes for all the standard symbols when it makes up part of a winning combination. Whenever a wild symbol lands, the Molotov Wilds feature is activated. All the symbols directly above the wild on that reel also turn wild. This in turn gives you wild reels.

Land 2 scatters on the same spin and you’ll trigger the Riot Respin feature. A respin is awarded on a 6 reel, 729 ways to win machine with the triggering scatters turning into sticky wilds. If there are any Molotov wilds on the triggering spin, they also turn sticky for the respin. 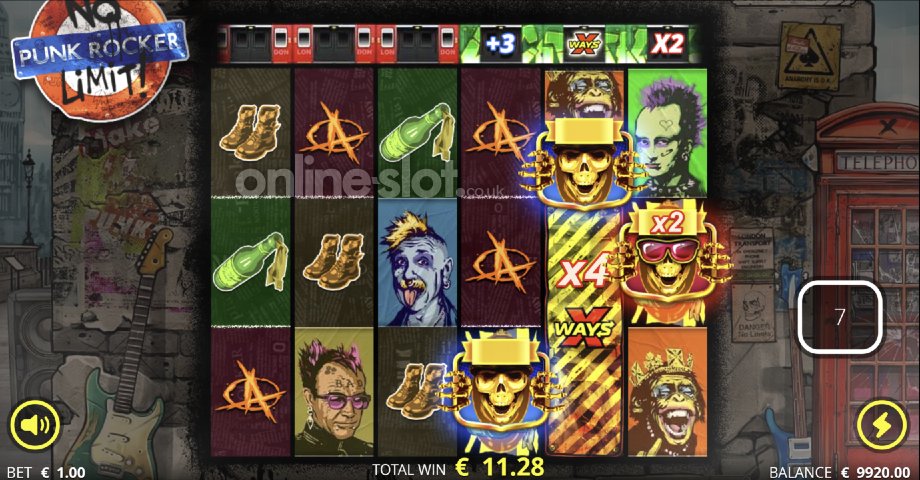 The Anarchy Free Spins feature triggers when you land 3 scatters on the same spin. You’ll then go on to play 8 free spins on an expanded 6-reel machine. The triggering scatters turn into wild symbols which pogo around to new position on the reels with each free spin. These are known as Jumping Wilds which appear in San Quentin.

Look out for the subway train above the reels which can bring modifiers into play. These can award extra free spins, a wild multiplier, 4-high xWays, all reels become 6 symbols high or an extra jumping wild: 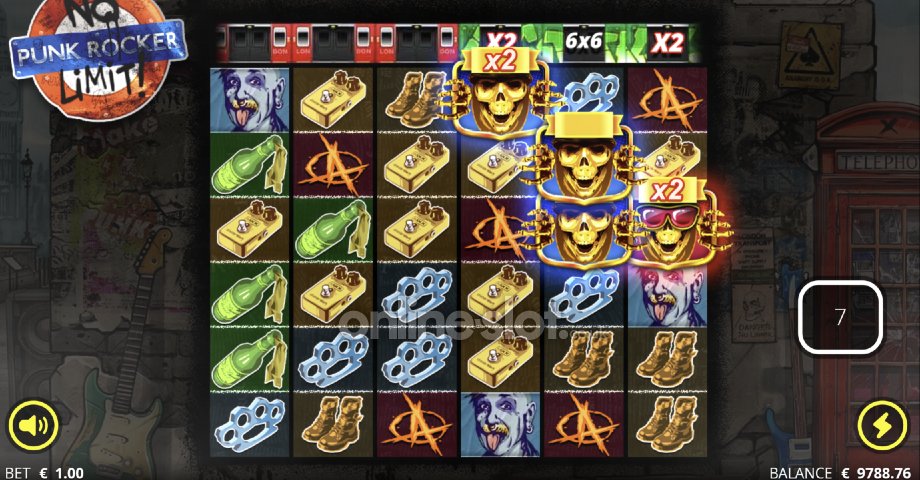 The Civil War Free Spins feature activates when you land 4 scatters on the same spin. Again, 8 free spins are awarded on a machine that offers a minimum of 729 ways to win.

The 4 scatters that triggered the feature transform into Jumping Wilds. They land on a new position on each free spin. Once again, the modifiers can deliver extra rewards. This means additional free spins, wild multipliers up to 25x, xWays mystery symbols, 6-High reels and extra Jumping Wilds.

In some territories (not the UK), there’s an option to buy your way into both of the free spins features. Known as the Nolimit Bonus feature, the RTP increases too. Here are your 2 options:

The adrenaline-fueled Punk Rocker slot is brimming with energy, from the anarchic design through to the wide variety of features. Those features can deliver quite the punch too as the max win of 15,072 x stake per spin is high. As to is the volatility.

There was more going on here than I expected given the DIY nature of the punk music scene. The key to winning big is from the free spins where the modifiers can give you wild multipliers up to 25x, up to 46,656 ways to win, xWays mystery symbols and extra Jumping Wilds.

The features and the xWays game mechanic can take a little getting used to so take the Punk Rocker demo version for a spin above. If you’re fan of the Sex Pistols or Ramones, Punk Rocker xWays could be just the slot you’re looking for.

If you’re a fan of Jumping Wilds and xWays, they combine to devastating effect in Nolimit City’s San Quentin which offers wins of up to 150,000 x your total stake per spin.

What is the Punk Rocker RTP?

The Punk Rocker RTP is 96.01% which is about average. Highly volatile, the RTP increases up to 96.54% if you buy your way into the Anarchy free spins.

What is the Punk Rocker max win?

The most you can win is 15,072 x your total stake per spin. The key to big wins will come from 6-High Reels which give you 46,656 ways to win. Another factor is the wild multiplier up to 25x in the free spins.

How does the xWays mechanic work?

xWays is the mechanic behind Punk Rocker. Look out for xWays symbols which hold up to 4 symbols and expand. Called the xWays Mystery Symbol feature, it gives you up to 46,656 ways to win.

Are there any Punk Rocker free spins?