Pay homage to a jungle king and try and bag a big payday in the process in the Monkey’s Gold slot, the first game from developer Nolimit City to use the xPays mechanic. After a winning combination is created, the successful symbols drop to the bottom position on their row and the rest of the grid spins again. Look out too for colossal 2x2 and 3x3 symbols which come with multipliers of up to 500x attached, symbol upgrades which trigger each time you fill a row and multipliers. Trigger the Monkey’s Gold Free Spins feature for sticky multipliers that increase in value with each row that’s filled. Find out more in our in-depth Monkey’s Gold review.

Where to Play Monkey’s Gold Slot

The action in the Monkey’s Gold slot plays out on a 6×6 grid. Winning combination are created by landing 3 or more matching symbols or wilds on adjacent reels, starting from reel 1.

Stake levels in Monkey’s Gold start at 20p per spin, rising to a potential maximum of £100 per spin for the high rollers. Click on the $ sign below the reels and adjust to suit. You can run between 5 and 100 autospins if required. You can set it so that autoplay ends when you drop below or get above specified percentage limits. Click on the arrow below the main spin button to set this up.

The Monkey’s Gold RTP is 96.02% which is about average. 57.32% of wins will come in the base game and 38.7% coming in the free spins. The hit frequency rate of 23.26% means you’ll land a winning combination just less than a quarter of spins on average. The volatility here is in the medium to high range. The Monkey’s Gold maximum win is 12,683 x your total stake. 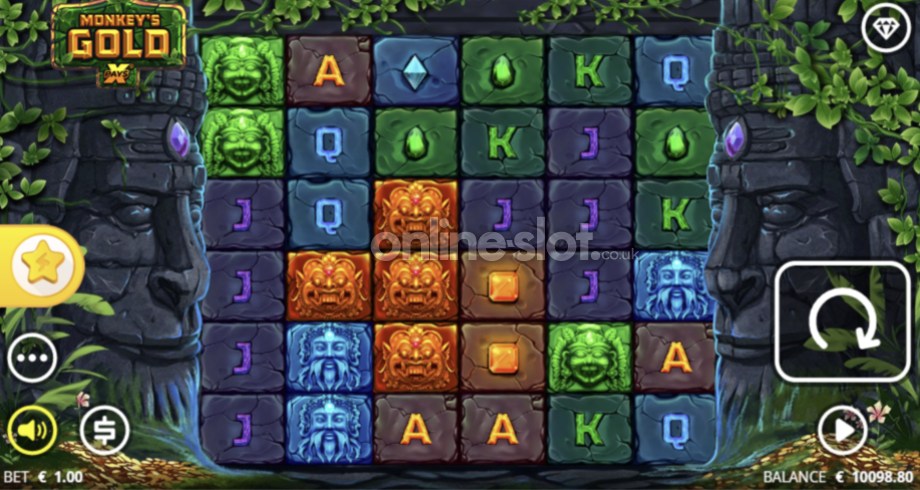 The design in the Monkey’s Gold slot is impressively done. Based on the legendary Monkey King figure (also known as Sun Wukong), it has a slight Asian feel to it.

Despite all the moving parts, the colourful visuals here work very nicely. The soundtrack fits well too. There’s a rhythmical backing track playing while you spin which is punctuated by the occasional blast of panpipe. With the thud of the stone blocks as they drop onto the grid, it creates plenty of atmosphere.

The reels are flanked by a pair of gigantic stone monkey statues which are covered with jungle vegetation. The stone blocks on the reels feature A to J symbols, 3 medium paying gemstones and 3 higher paying totem-style symbols.

Nolimit City has created fully optimised versions of Monkey’s Gold for all devices including desktop, tablet and mobile. There’s a lot going on in this slot but the design and gameplay stand up nicely, even if you playing on a small screen.

If you’re after a slot that delivers something new, you’ve come to the right place with Monkey’s Gold. The xPays game mechanic is certainly different. There are plenty of other extras to consider too including multipliers, colossal symbols, symbol upgrades and a free spins feature with even more multipliers. We’ll start by looking at the game mechanic.

When you get a winning combination, the xPays feature kicks in. When that happens, all the losing symbols are removed and the winning symbols drop down to the lowest position on their reel. A new symbol drop follows (this doesn’t count as a paid spin). 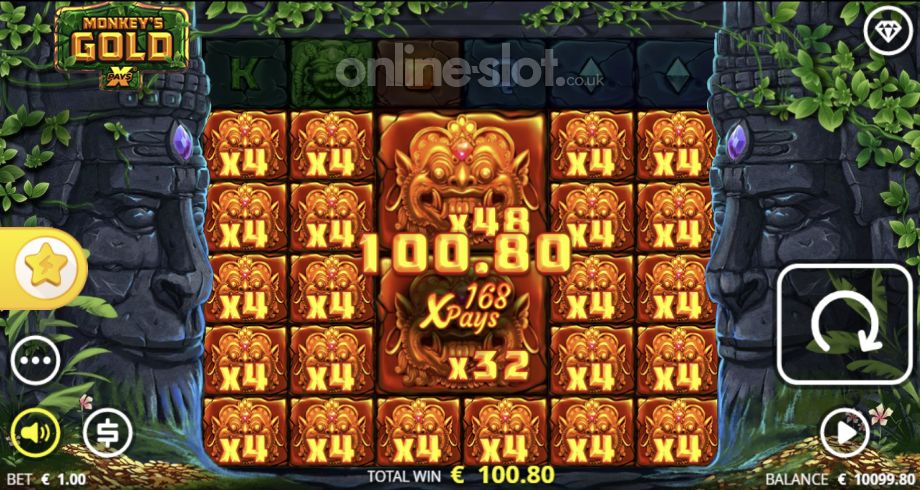 If a symbol appears with a multiplier attached, it counts as multiple symbols. For example, a symbol with 3x attached counts as 3 symbols in any winning combination.

The Symbol Upgrade feature comes into play if you manage to fill the whole of a row with symbols during a set of symbol drops. All the symbols in the row are upgraded to a more rewarding symbol. If it’s already the highest paying symbol, you’ll get a multiplier on top. 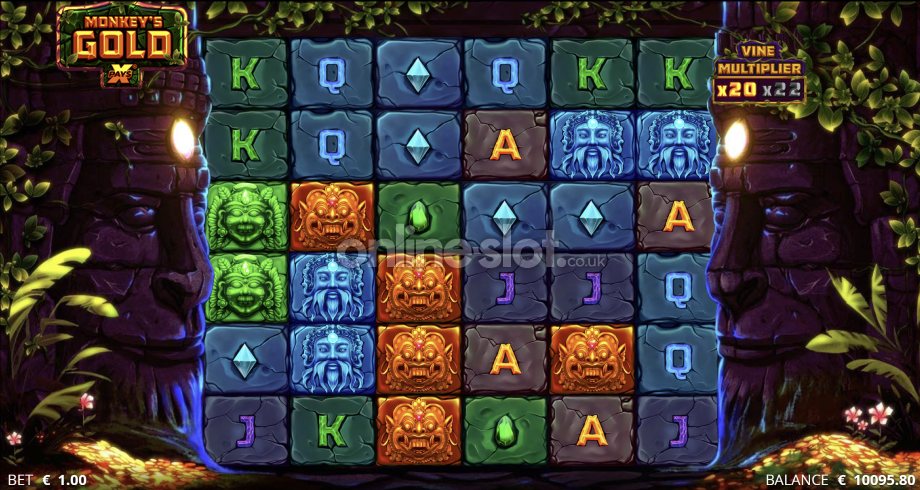 The Monkey’s Gold Free Spins feature is triggered by landing 3 Bonus symbols on the game grid in the same set of symbol drops. You’ll then go on to play 10 free spins. 3 more free spins are added for each extra Bonus on the trigger.

Each time you fill a row a multiplier is applied. The multiplier will be 1x, 2x or 3x. This is determined by a roll of the dice before the free spins start. When you fill a row, the multiplier increases by 1, 2 or 3 each time. Every bonus symbol landing will also give you an extra free spin with no limits.

In the Monkey’s Gold slot, the gameplay is a little unorthodox courtesy of the xPays mechanic. It can sound a little complicated but a few spins in and you’ll soon get the hang of it.

There are some top extras here once you have got your eye in. That’s the case in both the base game and the Monkey’s Gold Free Spins feature where the symbol upgrades and colossal symbols can really work some magic. The key to big wins is from the multipliers in the free spins which can increase infinitely if you get on a good run and fill plenty of rows.

It’s nicely designed too. Put all that together and Monkey’s Gold is a promising debut for the xPays mechanic. If you fancy unique slots, Nolimit City has plenty. I recommend the award-winning Deadwood and the volatile Pixies vs Pirates.

What is the Monkey’s Gold RTP?

The Monkey’s Gold return to player rate is 96.02%. The volatility is in the medium to high range. It comes with a hit frequency of 23.26% meaning nearly a quarter of spins will result in a win.

What is the Monkey’s Gold max win?

The most you can win from a single spin in Monkey’s Gold is a whopping 12,683 x your total stake. This will more likely come from the free spins which benefits from multipliers.

Are there any Monkey’s Gold free spins?

What is the xPays game mechanic?

When you get a win, the xPays feature applies. The winning symbols drop to the bottom of their reel and a new symbol drop follows. These continue as long as new winners are formed. A payout is then made.