Head to the Dark Ages where man battles all that nature can throw at him in the Barbarian Fury slot. This highly volatile game has been created by Nolimit City and combines impressive design with some potentially explosive gameplay. Nudges are central to the action. If any part of the wild lands, it nudges up or down to fill the whole of the reel. Each nudge also brings with it a multiplier which can send payouts rocketing by up to 4x. Will this epic adventure leave you in a rage? Uncover everything this game has to offer in our honest and unbiased Barbarian Fury review.

This game is played on 5 reels, 4 rows with 25 fixed paylines. Winning combinations are formed by landing 3-5 matching symbols on a payline, starting from the leftmost reel.

The Barbarian Fury RTP is 96.06%, which is about average. The RTP increases to 96.32% if you use the feature buy option, but it’s not an option for UK players.

You wouldn’t expect this Barbarian Fury slot game to be a timid, low variance affair with a title like that. And it isn’t. This is a high risk but potentially high reward slot. It delivers volatile, high variance gameplay.

Stakes are from 25p up to £125 per spin, which is a nice range and caters to all bankrolls. If you’re on desktop, you can head to the settings in the bottom left and choose to use the spacebar to spin if you get tired of clicking.

With a hit frequency of 23.92%, just under a quarter of spin on average will result in a winning outcome. The maximum win is 8,785 x your stake, and your best chance of landing this is during one of the bonus features. 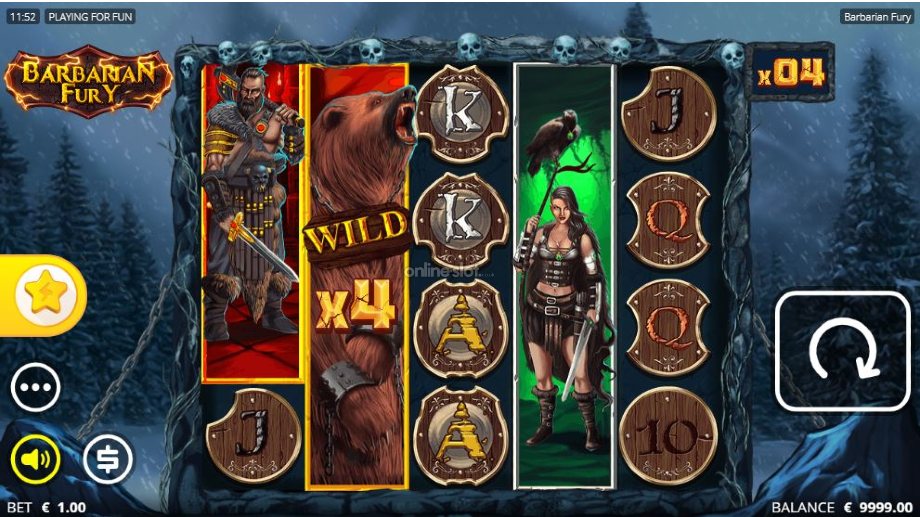 A wintry forest forms the backdrop to the action in Barbarian Fury. It resembles the Game of Thrones TV series slightly, which is always a good thing if you’re a fan of the show.

A stirring orchestral score is a prerequisite for these fantasy-themed slots and Nolimit City has come up with a suitably sweeping one here. The lush orchestration is a good fit for the epic theme. The game interface is nice and simple. It’s easy to follow what’s going on and the features are simple enough to understand.

The lower value A to 10 symbols appear on wooden shields which is a nice touch. The most rewarding symbols are the rather buff looking comic book style Barbarians. The best symbol is the red Barbarian in the kilt who pays 10 x your total stake if you land 5 on a payline.

The great brown bear is the game’s wild. It performs all the usual substitution functions and replaces all the standard symbols when it forms part of a winning combination. What makes this wild a little different is that it nudges up or down to turn the whole of the reel wild whenever it makes an appearance.

The visuals are neat and crisp enough to survive the transition to a smaller screen. But you’ll lose something from the orchestral backing track if you’re playing it through a mobile speaker. We’d suggest using headphones to enjoy the soundtrack on mobile if you prefer playing with the sound on.

Overall, you can enjoy the Barbarian Fury mobile slot on iOS or Android devices without any problems.

There’s no shortage of action on offer in the Barbarian Fury slot game, with 3 main bonus features in total. Look out for wild nudges with multipliers, stacked symbol respins as well as a free spins feature with multipliers. Let’s dive in and explain each one you will come across.

When a wild lands, it moves up or down to turn the whole of the reel wild. Each nudge adds to a multiplier. For example, if you landed the bear in the top position on a reel it would nudge down 3 more positions until it filled the whole of the reel. Each of those 3 nudges down would take the multiplier from 2x, to 3x to 4x.

If the wild filled 3 parts of a reel, it would nudge to fill the 4th position. This single nudge would deliver a 2x boost. It’s possible to land nudging wilds on more than 1 reel on the same spin. If that happens, the value of the multipliers is added together.

Nudges are a key element of the second feature we’ll look at, the Barbarian Respin feature. The 3 Barbarian characters are the most rewarding standard symbols. Land 3 or more of the same Barbarian on the same spin and you could trigger this mini bonus.

The matching Barbarian symbols expand to fill the whole of their reels. They then lock in position and a respin follows. With 3 stacked symbols locked in place, you could potentially land some big results if the respin falls nicely. The Barbarian respins can trigger in the base game and the Fury Spins feature which we’ll look at next. 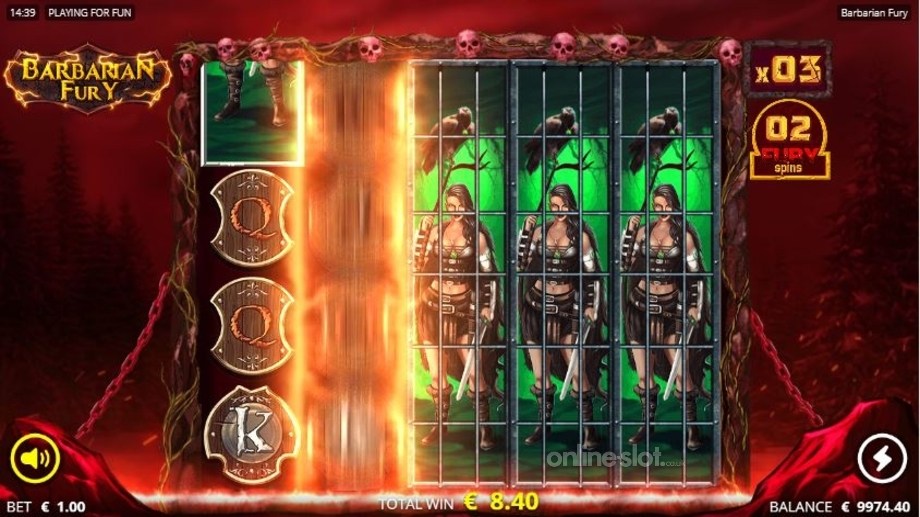 The Fury Spins feature is triggered by landing 3 or more scatter symbols anywhere on the reels on the same spin. The number of free spins you’ll receive is determined via nudges. Each position the scatter has to nudge down until it drops off the bottom of the reels awards 1 free spin.

Land 3 or more of the same Barbarian symbol and you’re guaranteed to trigger the Barbarian Respin feature. The nudging wilds are in play during the Fury Spins too. Just like in the base game, each nudge increases the multiplier by 1x. This multiplier doesn’t reset on the following spin though. It remains in play.

Further nudging wilds can take the multiplier higher and higher. This can result in 8,785 x stake wins on each free spin.

Landing a scatter symbol will add more free spins to your total. The number here is also determined by the number of nudges it takes for the scatter to fall off the screen.

You’ll have the option to buy the Fury Spins feature if you don’t want to wait. This will cost you 70 x your total bet. In return, you’ll receive between 9 and 20 Fury Spins. However, this isn’t available in the UK though.

There aren’t many slots where nudges play a crucial role like in this Barbarian Fury slot. It could be a little distracting but it ramps up the action rather nicely.

You can expect to land the Barbarian respins and nudging wilds regularly. We found them to be a bit hit and miss on the payouts front. It’s a similar story with the Fury Spins feature which can be something of a feast or famine. That’s no surprise as the variance is high at 9/10.

We liked Barbarian Fury. The comic book design is great and the features offer potential. If you like the fantasy theme, it’s well worth a spin. Feel free to try our demo too before you decide to use any real money.

For more similarly themed action, check out the initial follow up to this one – Nolimit City’s Warrior Graveyard slot. The sequel to that and the most recent slot to consider is the Legion X slot. This one boasts huge 31,000 x max win potential and is packed full of features.

What is the Barbarian Fury RTP?

The Barbarian Fury RTP is 96.06%, which is slightly above the average of 96% for a slot of this type. You can increase the RTP to 96.32% if you buy your way into the Fury Spins feature for 70 x your stake. This is not available to UK players though.

What is the Barbarian Fury max win?

The maximum win here is 8,785 x your total stake. This is best achieved during the Fury Spins feature due to the number of free spins and multipliers you can get.

How volatile is Barbarian fury?

Very. We’re not quite at the stratospheric level but it’s pretty feisty as far as variance goes. On a scale of 1 to 10, this one is a 9.

Pretty good. It’s great with the cartoon-style imagery and the orchestral backing track making for a very atmospheric slot. Nolimit City doesn’t hold back in terms of design and animations. Barbarian Fury is intense and has the volatility and max win potential to match.

Is there a Barbarian Fury demo?

Yes. You can play the freeplay version here at Online-Slot.co.uk. It’s a good chance to test it out before deciding if you want to use your own funds.