The Finn’s Golden Tavern slot is powered by NetEnt and is played on a 5x5 grid. Using the Cluster Pays mechanic, NetEnt’s favourite lucky leprechaun (Finn) is back after the original Finn and the Swirly Spin slot. Playable from 10p per spin on Windows, iOS and Android powered devices, it comes with avalanches, 2 random features, free spins with increasing multipliers and plenty of coin wins.

With an Avalanche Reels feature in play, free spins treasure chests will transform low value symbols into coins for cash prizes. Finn can randomly slam his fist down to give you a winning combination. There’s a Free Spins feature where you get 5 free spins and an increasing multiplier. In the Free Spins Coin Bonus feature, coins are added during the free spins for cash bonuses.

Finn’s Golden Tavern uses the Avalanche Reels feature meaning symbols from winning combinations are replaced with new symbols – this gives you the chance to win again and again from each spin.

The Finn’s Golden Tavern slot comes with a Random Coin feature. Look out for the free spins treasure chest symbol appears in the immediate loop of symbols around the middle position – when it does, all low value win symbols transform into coin symbols which are then added together to give you your prize.

In the base game, getting no winning combination can randomly trigger the Fist Slam feature – Finn then slams down his fist onto the table/reel set and moves a coin symbol to give you a winning outcome.

During the Free Spins feature, look out for the free spins treasure chest symbol in the middle position of the reels – this will trigger the Free Spins Coin Bonus feature. A number of coin symbols will then be placed onto the reels which give you their total as a cash win.

The Finn’s Golden Tavern slot can be played from 10p to £500 a spin – set on a 5×5 grid, it’s a Cluster Pays slot – you can form winning combinations by getting any horizontal or vertical line of 3 or more matching symbols. If you get a win without a wild symbol, a wild is created in place of 1 of the symbols that has exploded and disappeared. If you get a win with a wild, the wild explodes and destroys symbols vertically and horizontally adjacent to it.

Medium to high variance, the max win from every free spin is 1,000 x your stake – with the increasing multiplier. Expect the majority of your wins to be between 5 and 30 times your stake with the bigger wins coming in the Free Spins feature and the multipliers.

The Finn’s Golden Tavern game is available to play on desktop, mobile and tablet devices – the same experience is offered across all devices as it uses HTML5 technology. The design has been adapted to look just as good on smartphone devices making it perfect for playing on the go.

You can play with the Autoplay function where you can choose up to 1,000 spins. With a quick spin mode available, you can customise your experience by stopping the Autoplay on any winning combination, when you enter the Free Spins feature or your balance goes up or down to the amount you desire. 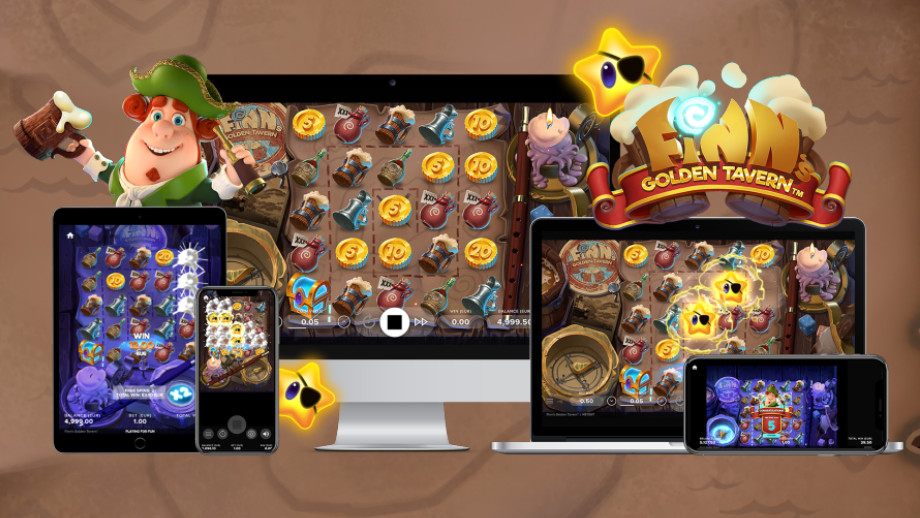 Visually, the Finn’s Golden Tavern online slot takes you on a night out at Finn’s local tavern. Different to the Finn and the Swirly Spin slot, the soundtrack is rather good as Irish flutes and folk music provide the entertainment – reminiscent of Finn’s home, it has a light-hearted and fun feel.

The reels are set on a bar table – behind the reels you’ll see a compass, candles, beer mats, playing dice and beer barrels. The game has a certain pirate feel.  When it comes to symbols, you’ll see 4 gold coins which have 5, 10, 20 and 50 values on them.

If you get 3 or more coin symbols in combination, you’ll win the sum of the coins. The higher value symbols are all represented by drinks served at Finn’s Golden Tavern – there’s 4 of them available with them all paying 5 times your stake for 5 in combination. The star symbol is the wild which performs the usual substituting duties (just replacing coin symbols).

Finn’s Golden Tavern is a medium to high variance slot and is better than the original – however, NetEnt has created much better slots in my opinion. If you want an Avalanche Reels slot which offers much bigger potential payouts, you cannot go wrong with Gonzo’s Quest (by NetEnt) – a cult favourite.

Yes, you can play the Finn’s Golden Tavern slot for free here at Online-Slot.co.uk – you can play on desktop, mobile and tablet devices. There are more than 3,000 online slots to enjoy at our website.

🎰 How do Avalanche Reels slots work?

The Avalanche Reels feature sees winning symbols replaced with new symbols in order to give you another chance of winning. The avalanches keep on coming until no more new wins are created.

⚡ What is the Finn’s Golden Tavern max payout?

You can win up to 1,000 x your stake on each spin in the Finn’s Golden Tavern slot – the likelihood of winning big comes in the Free Spins feature due to the increasing multiplier.