The Sausage Party slot is a branded, movie-inspired game from Blueprint Gaming that has 5 reels and 20 paylines. Playable from 10p a spin on all devices, it has a total of 13 bonus features with 6 random base game features and 6 bonus features – 3 of them offer free spins. It has an RTP of 95.95%. You’re in for a wild ride.

Where to Play Sausage Party Slot

Being a branded slot, Sausage Party has a total of 13 bonus features – yes, 13. There’s a Power Play Bet feature (which is found in other Blueprint titles) as well as 6 random base game features and 6 main bonus features. Brace yourself for details below.

Sausage Party uses a Power Play Bet feature which has been used in other Blueprint Gaming slots like Farm Yarn Favourites. If you activate it from the button to the side of the reels, your stake will double. When you get a win of 5 x your stake or higher and the Power Play Bet feature is enabled, you will spin the bottle to land a win multiplier or trigger a Wild in the Aisles bonus feature (more info below).

Sausage Party comes with The Immortals features which are randomly triggered on any base game spin. Here’s what they offer:

There’s more. With 6 Wild in the Aisles bonus features to benefit from, you will need to land 3 or more bonus scatters to play them. You then spin the wheel to determine which of the 6 bonus features you will play.

Sausage Party has 5 reels, 3 reels and 20 paylines. You will need 3 or more matching symbols on any of the paylines to get a winning combination – except for the Sausage Party logo and wild symbols where you only need 2.

You can play from 10p to £250 per spin. If you opt for the Power Play Bet feature, your stake is doubled from 20p to £500 a spin. There’s the standard Autoplay function where you can play up to 100 autospins as well as set a session loss limit and session single win limit.

Variance wise, Sausage Party is nicely balance as it’s medium. With an RTP of 95.95%, the RTP isn’t affected if you use the Power Play Bet feature. The max win per spin is 500 x your stake. In the Burn In The Oven Free Spins feature, the 2x multiplier from the Fr-enda wild could result in 1,000 x stake payouts on each free spin. 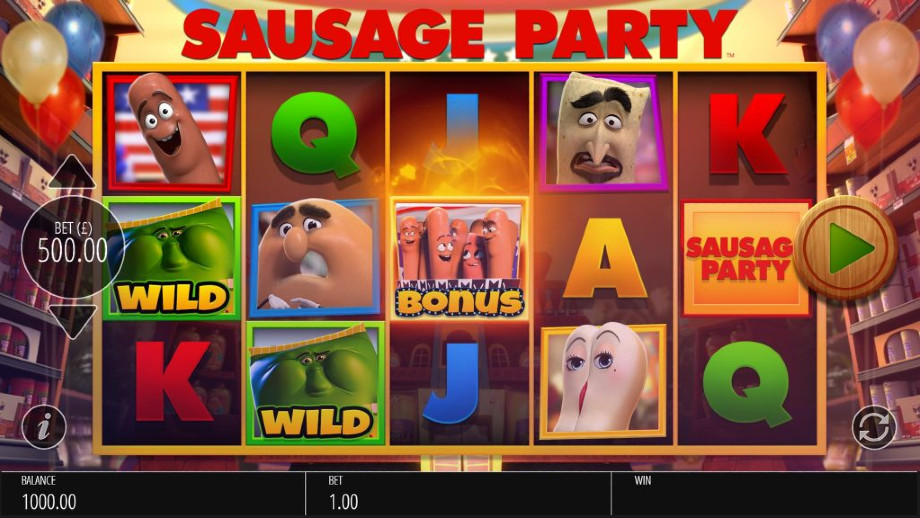 The Sausage Party slot is based on 2016 movie (of the same name) which has a 83% Tomatometer rating on Rotten Tomatoes. An adult cartoon film, its based on a sausage called Frank who lives in a supermarket. He discovers the truth about his existence and, alongside his friends, try to escape their fate.

Set inside the supermarket, the graphics and animations portray the film. Colourful and vibrant, you will see low value A, K, Q and J royals on the reels. There are also food characters including Frank – Frank pays 15 your stake for 5 in combination. The Sausage Party logo symbol is the highest paying symbol with 5 in combination giving you 25 x stake. The purple wild symbol substitutes for all symbols except the bonus scatter and pays up to 25 x stake.

You can play the Sausage Party slot game on desktop, mobile and tablet devices as standard. This is because all Blueprint Gaming slots use HTML5 technology meaning you can play on iOS, Android and Windows devices.

Sausage Party Review Summary – a must if you love film

The Sausage Party slot follows the pattern set by Blueprint Gaming regarding branded slots. All their branded games are feature-packed – includes The Goonies and Ted. With a focus more on entertaining, the max payout is 500 x stake on each spin or free spin. With the exception of the Burn In The Oven Free Spins feature where you can win up to 1,000 x your stake per free spin with the 2x multiplier.

Sausage Party does look great visually and features all the much-loved characters from the film. I would recommend you play this game if you’re a fan of the movie. However, the max win isn’t nowhere as high as you’ll find in Blueprint Gaming’s Megaways slots for example.

❓ What is the Sausage Party slot RTP?

The Sausage Party RTP is 95.95% – this is average for an online slot. Wins are balanced as there are 6 random base game features and 6 main bonus features.

🥇 What is the Sausage Party max payout?

The most you can win from the Sausage Party slot is 1,000 x your stake from each free spin in the Burn In The Oven Free Spins feature due to the possible 2x multiplier.

🎰 Can I play the Sausage Party slot for free?

Yes – the Sausage Party slot demo is available here at Online-Slot.co.uk. You can try the official movie slot on desktop, mobile and tablet devices.

Yes, the Sausage Party slot game is based on the 2016 film which starred Seth Rogen , Kristen Wiig and Edward Norton. There are clips from the movie and well as features based on all the much-loved characters.