Join a feline explorer on a quest for lost Aztec riches in the Whisker Jones slot, a 5 reel, 10 payline game from 1x2 Gaming. The highlight of this jungle quest is the Free Spins feature where you can look forward to playing 8, 12 or 16 free spins. During the free spins, the Bonus symbol is an extra wild. It also adds an also removes the lowest value royal symbol whenever it appears. Look out too for Bonus symbols on the middle reel which can turn up to 6 symbols wild on any base game spin. Find out more about this South American adventure in our Whisker Jones review.

Where to Play Whisker Jones Slot

The Whisker Jones slot uses 5 reels, 3 rows and 10 fixed paylines. To create a winner, land 3 or more matching symbols or wilds (or just 2 higher value character symbols) on 1 of the 10 paylines, starting from reel 1 and you’ll create a winning combination.

Click on the coins in the bottom left-hand corner of the screen to adjust your bet size. Stakes range from between 10p and £50 per spin. For autoplay, click on the A above the spin button where you’ll be able to set up to 99 autospins complete with win and loss limits to suit. You can also end the autoplay when you trigger the feature. Head to the settings if you want to speed things up and activate quickspin mode. You can use the spacebar to spin too.

The Whisker Jones RTP is 96.1% which is about average. The volatility is in the medium range with the bigger wins coming in the free spins. The most you can win from a single spin is 500 x your total stake. 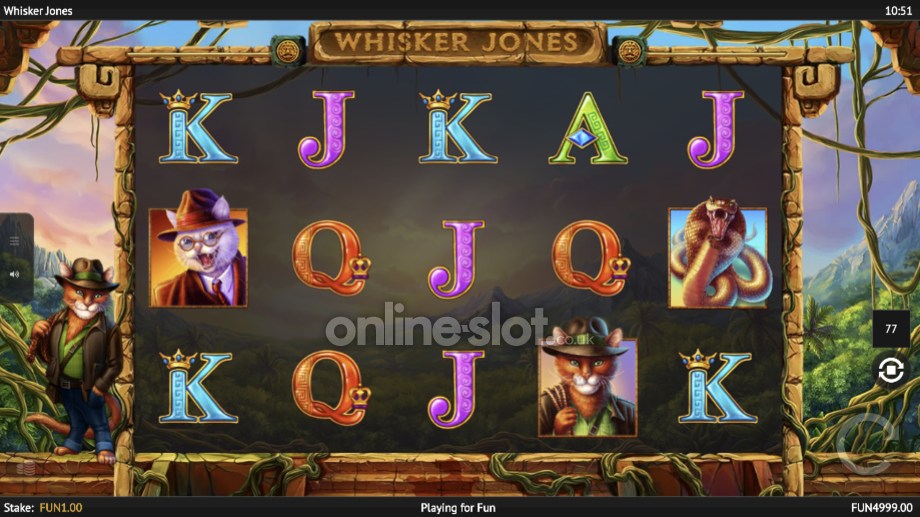 The Whisker Jones slot has an Aztec theme as go deep into the jungles with the renowned feline adventurer (Whisker Jones). It bears a lot of resemblance to Indiana Jones obviously.

The cartoon-style visuals here are simple but nicely done. There’s a stirring soundtrack blasting away while you spin which fits the treasure hunting theme well. It’s not the height of sophistication but it’s a slot about cat explorers so it was never likely to be. It all works well enough though.

Set against a jungle backdrop, the reels in Whisker Jones are made up of A to J royals, a serpent and a trio of cat explorers. The medium value cat appears to have been modelled on the Sean Connery character from the Indiana Jones films.

This jungle trek has been fully optimised for play on smartphones. The cartoon-style design and simple gameplay make the Whisker Jones mobile slot very playable.

1×2 Gaming has kept the gameplay here relatively simple in Whisker Jones. There are a couple of extras worth noting though. Look out for Bonus symbols which can turn multiple symbols wild. Trigger the feature for free spins with extras.

In the base game, the Bonus symbol can appear on reel 3 only. When it hits, the Bonus Symbol feature will be triggered. It can transform up to 6 symbols into wilds which really boosts your chances of finding a decent winning combination. 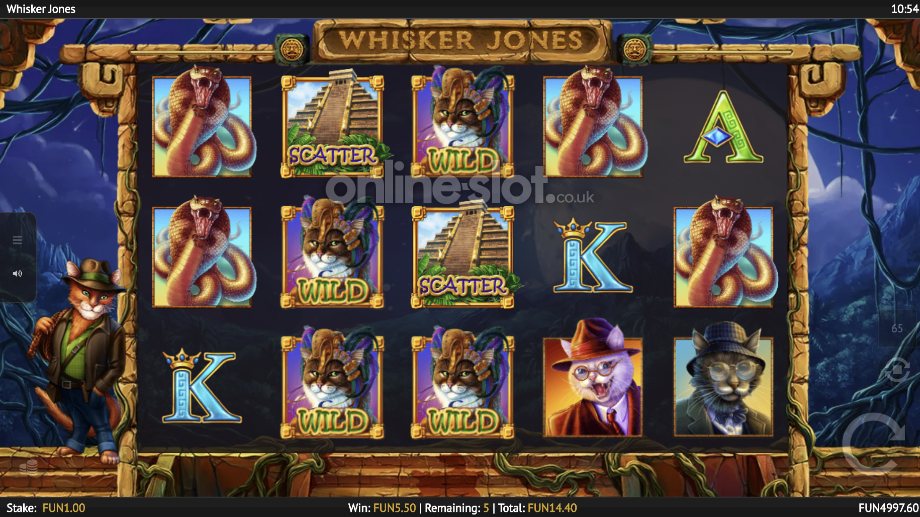 The jungle pyramid is the game’s scatter symbol. Land 3 or more jungle pyramids anywhere on the reels on the same spin to activate the Free Spins feature. The more scatters, the more free spins:

During the free spins, wilds can appear in stacked formation and fill entire reels. The Bonus symbol has slightly different properties during the feature. Once again, it can appear on the middle reel only. When it does, the Bonus symbol transforms into a wild.

Instead of adding other wilds, it removes the lowest value royal symbol from the reels for the remainder of the feature.  For example, the first Bonus symbol to land during the free spins would remove the J symbol from the grid for any free spins you have left. After the second Bonus hits, the Q is removed, then the K and the A.

With the lower value symbols out of commission, it becomes much easier to create a winning combination with the higher value symbols with payouts to match.  Retriggers are possible here too. Landing 3, 4 or 5 scatters adds another 4, 6 or 8 free spins to your total (with no limits).

The Whiskey Jones slot theme is a bit silly and the range of extras isn’t massive. Despite that, I rather liked this feline take on the Indiana Jones story.

The Free Spins feature has the potential to be rewarding, especially if you manage to land some bonus symbols and remove the lower value royals symbols. Combine that with a couple of retriggers and the fur can really start to fly. However, the max win of 500 x stake per spin or free spin isn’t something to get excited about.

1×2 Gaming has produced better slots with Van Helsing’s Book of the Dead offering 5,000 x stake wins from each free spin. Another option is the Battle Maidens Cleopatra slot which comes with 10,000 x stake wins per spin.

What is the Whisker Jones RTP?

The Whisker Jones return to player rate is 96.1%. That’s about average for a player return rate. The game’s variance is in the middle meaning balanced payouts throughout.

What is the Whisker Jones max win?

The most you can win on a single spin is 500 x your total stake. This can be achieved by filling the reels with the highest value Whisker Jones adventurer symbol.

Is there a Whisker Jones free spins feature?

Yes, the Free Spins feature begins with up to 16 free spins. Look out for stacked wilds and bonus symbols that also turn wild as well as removing a lower value royal symbol. You can also win unlimited extra free spins.

Is there a Whisker Jones mobile slot?

Yes. Whisker Jones uses HTML5 technology so can be played on smartphones, tablets and desktop devices. There’s also a free play version to play here at Online-Slot.co.uk, using whatever device you wish.