New slots – Under the Waves, Who’s the Bride, African Stampede 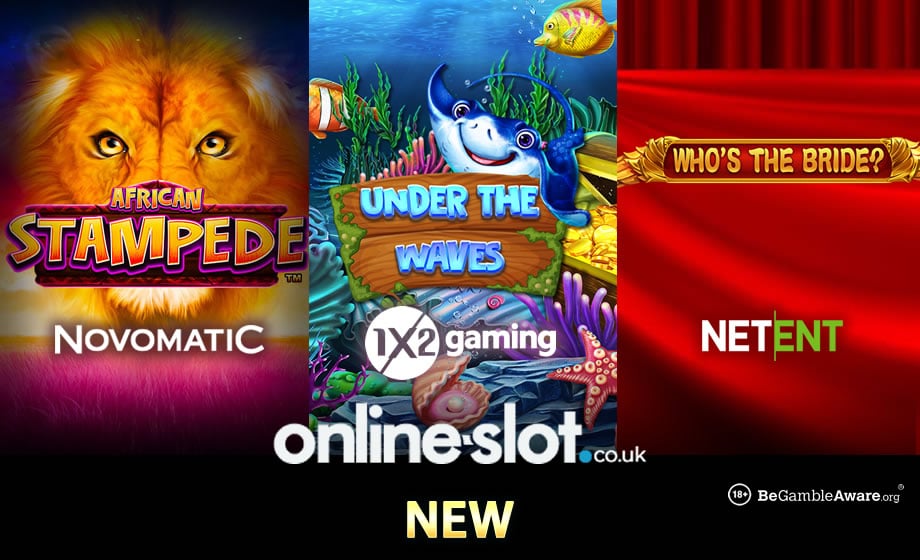 There are new slot games from 1×2 Gaming, Net Entertainment and Novomatic – read about Under the Waves, Who’s the Bride and African Stampede.

1×2 Gaming’s Under the Waves slot

The Under the Waves slot by 1×2 Gaming is a 5 reel, 20 payline game has an ocean theme and can be played from 20p per spin. With aquatic creatures on the reels including sharks, there’s a Bonus feature where you pick from the triggering treasure chests to win a cash bonus.

It also comes with a Free Spins feature where you will get up to 18 free spins. Each mermaid landing transforms into a sticky wild symbol for the duration of the feature. Simple yet entertaining, you can win up to 1,000 x stake on every spin or free spin.

Novomatic has released the African Stampede slot game which comes with 5 reels and 50 paylines. Set in the savannah, you’ll see elephants, rhinos and zebras on the reels – there’s also a lion wild symbol. It’s all about the Free Games feature where you play 12 free spins – all lion wilds are sticky too. However, you can only win up to 100 x stake on each spin or free spin.

The bizarre Who’s the Bride slot from NetEnt is a 5 reel, 9 payline slot with a Chinese/marriage theme. Playable from just 9p a spin, it’s all about activating the Free Spins feature where you’ll begin with 12 free spins. With a 2x multiplier applying, you’ll see 5 sticky wild bride symbols on the reels – if 1 of them appears on every reel, you’ll get 5 more free spins. Odd it may be but you can win 3,000 x stake on every free spin.

Dead or Alive 2
Immortal Romance
Book of Dead
Starburst
Fluffy Favourites
We use cookies to provide you with the best experience. see our Find out more.