Head to the frozen north in the Viking Runes slot, a colourful cluster pays game from Yggdrasil Gaming. The action here takes place on a 9x9 grid with winning combinations created by landing clusters of 6 or more matching symbols. Winning clusters trigger cascades of symbols which continue until no new winner is formed. Each cascade also brings a Lightning Wild into play. 5 or more cascades in a row triggers 6 free spins. These come with progressive multipliers. Look out too for randomly triggered symbol shuffles, added wilds and transforming symbols. Discover more in our in-depth Viking Runes review.

Where to Play Viking Runes Slot

The Viking Runes slot saga is played on a 9×9 grid with a Cluster Pays mechanic. To create a winner, land a cluster of 5 or more matching symbols or wilds. The more symbols in the cluster, the bigger the payout.

Stakes here range from between 40p and £40 per spin. Use the Bet Level tabs in the bottom left-hand corner of the screen to adjust your total bet size. To the right of the spin button is the Auto tab. This allows you to run between 10 and 1,000 autospins. You can set win and loss limits and also end the autoplay whenever you trigger the feature.

The Viking Runes RTP is 96.37% which is slightly better than average. The hit frequency is 31.8% so on average, you’ll land a winning combination just under one third of the time. The max win is 25,000 x your total stake from a single spin. 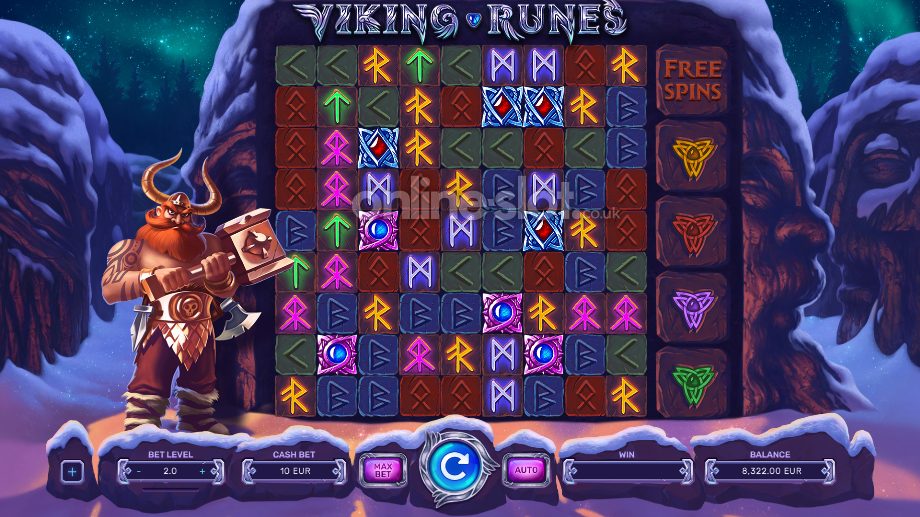 The design in the Viking Runes slot is terrific. With a Norse mythology theme, it’s set against a wintry backdrop with the shimmering Northern Lights above the reels.

There’s an almost neon look to the imagery which stands out sharply against the dark backdrop. It’s all very easy to follow. Likewise, the soundtrack which really gallops along to create a rather raucous atmosphere. As usual for an Yggdrasil Gaming slot, the sound and visuals really impress.

To the right of the main reels are the Lightning Wilds which crackle into life following winning cascades. To the left of the reels is a portly Viking Warrior. He can come to life to trigger 1 of the game’s modifiers.

With 81 symbols on display on each spin, there are plenty of moving parts in Viking Runes. Despite that, the design stands up well if you’re playing on a smartphone or tablet. The colourful visuals are super sharp which makes the Viking Runes mobile slot very easy to play.

Each time you land a winning cluster of 5 or more matching symbols, the Cascading Reels feature triggers. A cascade then follows. The successful symbols are removed from the grid and new symbols drop in to replace them. If a new winning cluster is created, the process is repeated. 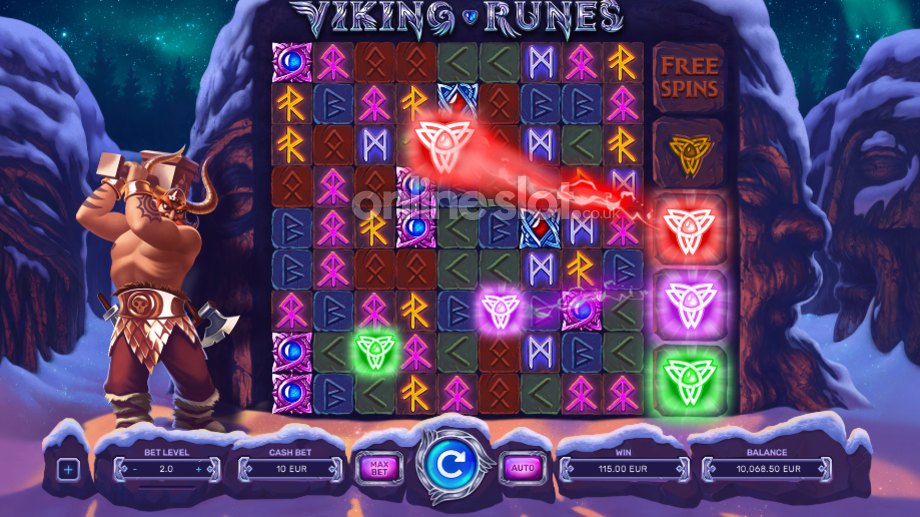 Each successful cascade also brings a Lightning Wild onto the reels. These change position with each cascade. You can land up to 4 Lightning Wilds in the base game. Following a winless cascade, the Lightning Wilds are removed from the grid.

The Runic Shuffle feature can trigger on any unsuccessful spin in the base game or the free spins feature. The symbols on the grid are shuffled into a new combination to create a new guaranteed winning cluster.

When the random Viking Sorcery feature triggers, between 3 and 9 wild symbols are added to random positions on the reels. A new payout calculation follows with the extra wilds doing their stuff. Like the other modifiers, this can play out in the base game and the feature. 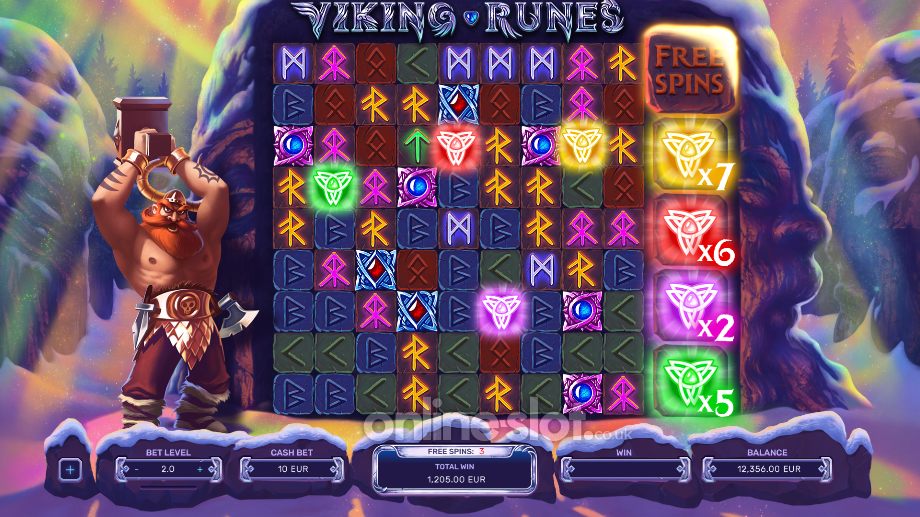 Instead of landing scatter symbols, the Free Spins feature is triggered by landing 5 or more cascade wins in a row. You’ll then go on to play 6 free spins.

The Norse theme is a popular one. I haven’t seen many with this combination of features though. There’s loads going on in the Viking Runes slot courtesy of the cluster pays, cascading reels, modifiers and free spins with wilds and multipliers.

The key to big wins are the multipliers in the free spins which arise from the Lightning Wilds and cascades. With 25,000 x stake payouts available on each free spin, this game rivals the popular Viking Runecraft slot by Play ‘n GO.

If you enjoy a good old Scandi saga, Viking Runes should hold plenty of appeal. If you like cluster pays slots, Jammin’ Jars by Push Gaming is another excellent option.

What is the Viking Runes RTP?

The Viking Runes return to player rate is 96.37% which is a better than average figure. It comes with a hit frequency rate of 31.8% meaning nearly a third of spins will result in a winning combination.

What is the Viking Runes max win?

Viking Runes can deliver big rewards with maximum payouts coming in at a whopping 25,000 x your total stake per spin. This will come in the free spins due to the increasing Lightning Wilds multipliers.

What is Cluster Pays?

To create a winning combination in a cluster pays slot, you’ll need to land a cluster of 5 or more adjoining symbols. The bigger the cluster, the better the payout. This gives you cascades which continue as long as you keep winning.

Are there any Viking Runes free spins?

Yes, the Free Spins feature begins with 6 free spins. These come with 4 Lightning Wilds which are active throughout. Cascade wins increase the value of the Lightning Wild multipliers.