Classy art deco design combines with some innovative gameplay in the Syncronite: Splitz slot, a 6 reel game from Yggdrasil Gaming. Standard gameplay takes place on a 729 ways to win machine but this can increase to 21,168 ways to win via the Splitz feature where symbols can split up to 8 times and randomly turn into other symbols. The other staple of the gameplay is the Synced Reels feature. On each spin, at least 2 but possible more reels will sync to show the exact same combination of symbols. Find out all you need to know about this volatile slot that offers payouts of up to 64,800 x stake in our detailed Syncronite review.

Where to Play Syncronite: Splitz Slot

The action in the Syncronite: Splitz slot starts on a simple 6 reel, 3 row machine that offers 729 ways to win. To create a winning combination, you’ll need to land 3 or more matching symbols on adjoining reels, starting from reel 1.

With the most rewarding diamond symbol, just 2 symbols are required to form a winner. The number of ways to win can increase greatly via the Splitz feature which can strike at random on any spin. We’ll look at this feature in more detail below.

You can play at stake levels of between 10p and £20 per spin. Use the coin value arrows below the reels to adjust the cash bet size. You can run up to 1,000 autospins if required. To set up win, loss and feature stop limits, you’ll need to set up autoplay via the settings tab. You can also adjust the spin speed here as well as enabling the spacebar to spin.

The Syncronite: Splitz RTP is 96% which is about average. The hit frequency rate of 27.34% means that you’ll land a winner on just over a quarter of spins on average. The most you can win from a single win is a massive 64,800 x your total stake. At the maximum stake levels, that’s a potentially eye-popping top award of £1,280,000. 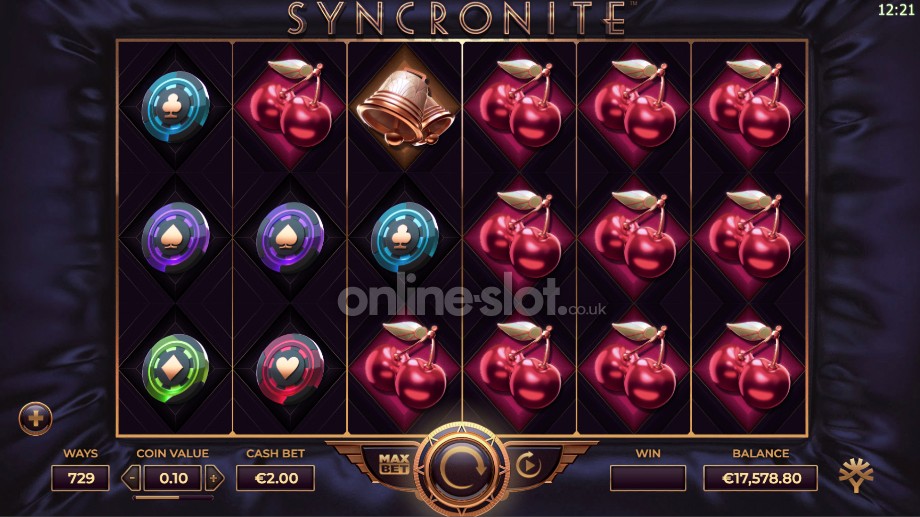 The Yggdrasil Gaming design team usually puts plenty of effort into creating games that are easy on the eyes and ears. In the Syncronite: Splitz slot, they’re created another superb-looking and sounding title.

There’s a glossy, art deco feel to the visuals. The reels look as if they’re lying on a velvet cushion. There’s a bouncy, jazz age backing track playing away in the background while you spin. I can’t help but think of Neil from the Inbetweeners dancing for some reason.

On the black reels you’ll find poker chips embellished with club, diamond, spade and heart motifs. They’re joined by cherries, dice and bells which all look rather flash. Top of the bill is the diamond symbol which pays 10 x your stake if you land 6 in combination.

You can play Syncronite: Splitz on all devices including desktop and laptop computers, tablets and mobile. The classy sound and visuals work very nicely on the smaller screen. The simple gameplay works well here too. The Syncronite: Splitz mobile slot is a very playable one.

The action is rather unusual. Played using a 6 reel machine, on each spin you’ll see synced reels. These can in turn trigger the Splitz feature which can add huge blocks of matching symbols and massively increase the number of ways to win. 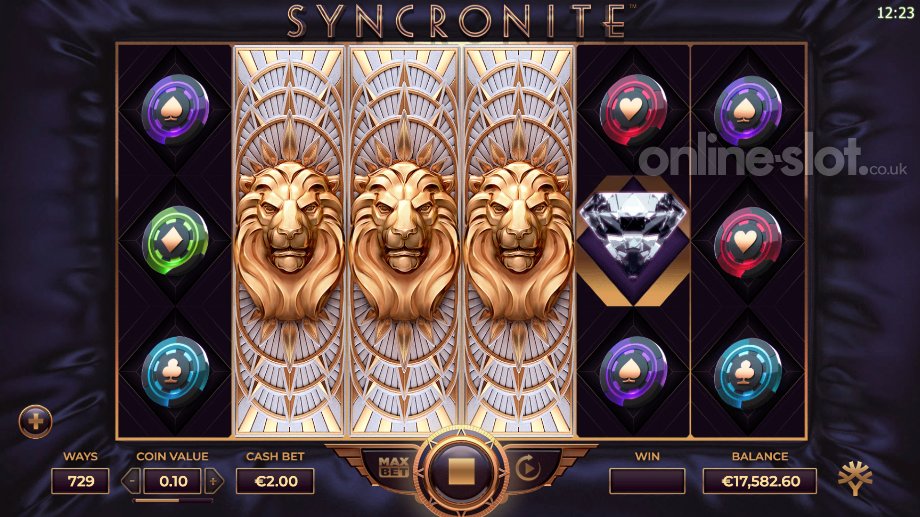 On each spin, at least 2 adjacent reels will sync so that they display the exact same combination of symbols. It’s possible to land more than 2 synced reels together though which is where the big winning opportunities can arise.

In fact, it’s possible to sync all 6 reels. Look out if you have high value symbols in the combination. This will result in bigger wins naturally. 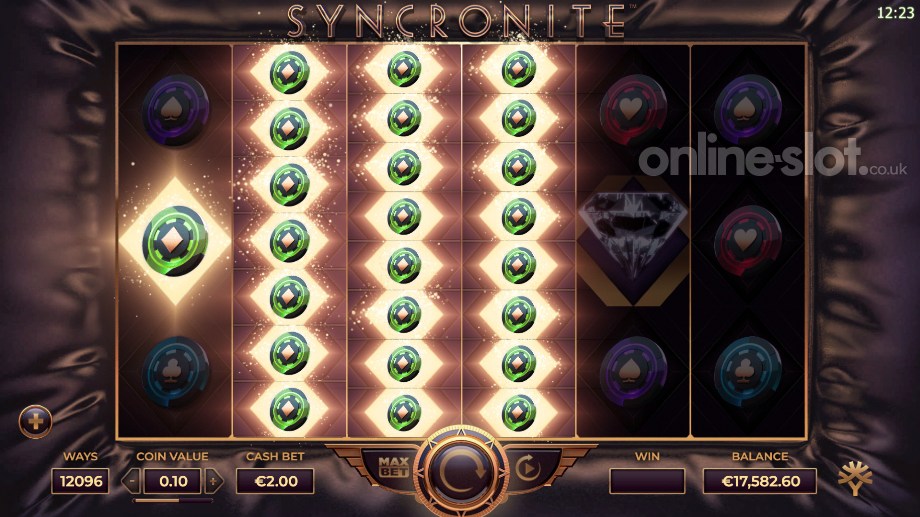 The second main element is the Splitz feature. Symbols on the Synced reels can split up into 8 matching symbols. These will all turn into the same matching symbol.

The number of ways to win increases here too. If the reels display the maximum complement of symbols, you’ll have 21,168 ways to create a winning combination.

You should also check out Neon Rush: Splitz and Temple Stacks: Splitz (by Yggdrasil Gaming) which use the Splitz feature in different ways.

Yggdrasil Gaming has kept things relatively simple in the Syncronite: Splitz slot. There’s a classy, understated feel to the design which is impressively done.

The gameplay isn’t overloaded with extras. If you’re looking for variety, look elsewhere as there’s not much of it available here. There aren’t any free spins, pick rounds or other features.

There’s still the potential for plenty of action here thanks to the synced reels that are in play on each spin and of course the Splitz feature which can create some massive clusters of matching symbols. It bears some similarities to the Twin Spin Megaways slot (by NetEnt) which comes with Synced Reels.

It’s elegant yes, but volatile too. It can deliver some potentially massive awards too with a maximum payout of some 64,800 x your total stake per spin. Not many other slots can boast these potential wins. The rather repetitive gameplay won’t be for everyone though.

What is the Syncronite: Splitz RTP?

The Syncronite: Splitz return to player rate is 96% which is about average for a release. The hit rate of 27% means that on average, you’ll land a winner on just over a quarter of spins.

What is the Syncronite: Splitz max win?

The maximum win here is an enormous 64,800 x your total stake. It might look classy and elegant but beneath the velvet visuals is a volatile slot. Tread carefully.

What is the Splitz feature?

The Splitz feature means that symbols can split into 8 matching symbols which will create more ways to win, up to 21,168. Syncronite: Splitz is the 3rd slot to use this feature/mechanic.

How does the Synced Reels feature work?

On every spin, the Synced Reels feature applies. Between 2 and 6 reels will display the exact same combination of symbols. Determined randomly, getting 6 synced reels with high value symbols can result in huge payouts.