Try and harness the mighty power of the sun in the Suncatcher Gigablox slot, a 5 reel, 10 payline win both ways game from Yggdrasil Gaming.  The key elements to this solar-themed title are the Gigablox. On each spin you’re guaranteed to land at least 1 reel filled with 2x2 colossal symbols but this can scale up to deliver 3x3 symbol blocks. Land an expanding wild and a respin is awarded with the wild locking in position. You can land multiple sticky stacked wilds from this feature. Fill the whole screen with wilds and you’ll scoop a 500 x stake bonus on top of the standard win. Find out more in our full Suncatcher Gigablox review.

Where to Play Suncatcher Gigablox Slot

The Suncatcher Gigablox slot is played on a 5 reel, 3 row, 10 payline machine. The game uses a win both ways mechanic so it’s possible to start winning combination from reel 5 as well as the more usual reel 1. To create a winning combination, land 3 or more matching symbols or wilds on adjoining reels on a payline, starting from either the left or rightmost reel.

Stake levels range from 10p to £1,000 per spin. Use the arrows next to the Coin Value box to adjust your bet size. Paytable values are shown in cash rather than coins and adjust as you change your stake. It’s nice and straightforward. In the Settings section, you can choose your spin speed. There’s an Autoplay function where infinite autospins can be chosen. Both these options aren’t available in the UK from October 2021.

The Suncatcher Gigablox RTP is 96% which is about average. The hit frequency rate is 22.26% which means on average, you’ll land a winner around once every 4 to 5 spins. This can vary massively over the short term though. The volatility here is in the medium range with the maximum win coming in at 1,430 x your total stake from a single spin. 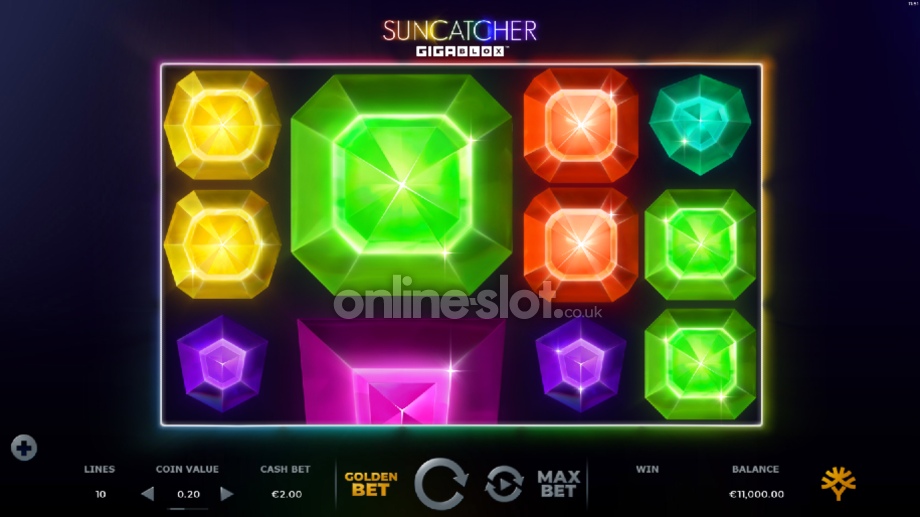 There’s a simple but rather futuristic feel to the design in the Suncatcher Gigablox slot. There’s an ambient soundtrack with a rather nice piano melody playing while you spin. It matches the visuals nicely.

The plain black reels are made up of 7 brightly coloured gemstone symbols. The best of the standard symbols is the red jewel. Land 3, 4 or 5 of these in combination and you can look forward to a payout equal to 2, 5 or 10 x your total stake.

The shimmering white diamond is the game’s wild. This can land on all 5 reels and substitute for all the standard symbols when it makes up part of a winning combination. The wild is lucrative in its own right too, paying 5, 10 or 25 x your total stake if you land 3, 4 or 5 on a payline. The wild also triggers the Wild Re-spins feature which we’ll look at shortly.

Suncatcher Gigablox is available to play on all devices including mobiles, tablets and desktops. The simple design and straightforward features are well suited to play on a smaller screen device.

Linked reels with colossal symbols and respins with sticky stacked wilds are the main features on offer in the Suncatcher Gigablox slot game. With 3 bonus features, it’s a relatively limited offering but one that can deliver plenty of action.

The Gigablox features sees linked reels that are made up or 2×2 or 3×3 colossal symbols. These are the equivalent of 4 or 9 standard single symbols respectively.

You’re guaranteed to land at least 1 Gigablox on each spin. It’s possible to land multiple Gigablox though. You could land a pair of 2×2 Gigablox filled with colossal symbols or even a 3×3 symbol block in combination with 2×2 reels. 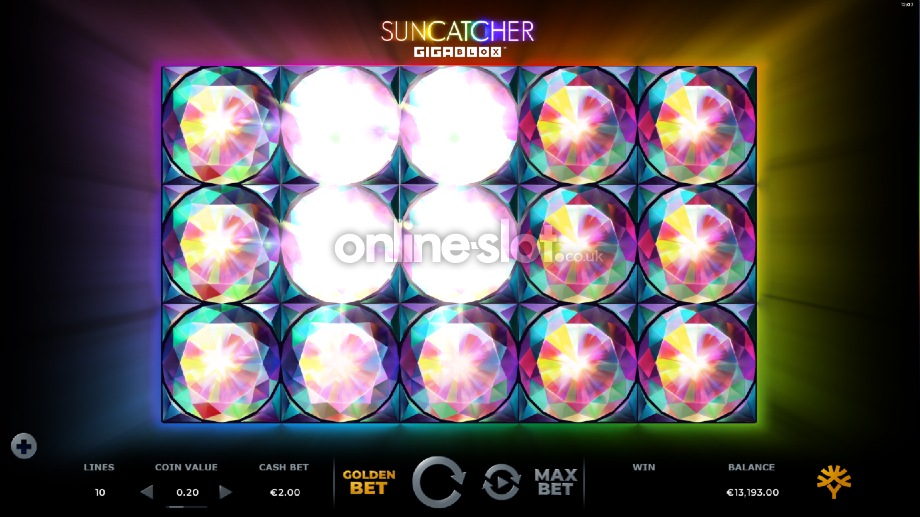 Whenever a wild symbol lands, the Wild Respins feature comes into play. The wild expands to fill the whole off that reel, turning it wild in the process. That expanded wild then locks in position and a respin follows. If a new wild symbol lands, it also expands to fill its reel before turning sticky. Another respin then follows, this time with 2 stacked wilds in position.

This process of expanding wilds and respins can continue until no new wild lands. In theory, it’s possible to fill all 5 reels with expanded wilds. If you manage that, you can look forward to a special bonus prize worth 500 x your total stake which comes on top of the standard payout amount for that combination.

If you fancy trying to liven up the action, you can activate the Golden Bet feature. This doubles the cost of each spin. For example, a standard £1 bet becomes £2 per spin with the Golden Bet in play.

In return for that doubled investment, 3 times as many wilds are on the reels during the base game. This boosts your chances of landing a wild and triggering the Wild Respins feature.

Suncatcher Gigablox Review Summary – like Starburst but with colossal symbols

As we’ve seen in the NetEnt classic Starburst, respins with sticky stacked wilds are a perennially popular feature. They’re centre stage in the Suncatcher Gigablox slot too. The extra element here is of course the potential from the colossal 2×2 and 3×3 symbols blocks.

The design is rather unfussy but is hypnotic. In fact, you could say that about Suncatcher Gigablox as a whole. The max win per spin is 500 x stake by filling the reels with wilds. Do this and the 500 x stake bonus is applied giving you a 1,000 x stake win. With the respins, you can get wins before you fill all reels with wilds leading to 1,430 x stake payouts overall.

If you like slots that deliver simple, hypnotic gameplay, Suncatcher Gigablox should appeal. If you like the Gigablox concept, Hades: Gigablox has more going on with more bonus features and 11,129 x stake max wins.

What is the Suncatcher Gigablox RTP?

The Suncatcher Gigablox RTP rate is 96% which is bang on average. Medium variance, the bigger wins will come from the expanding wilds which lead to respins.

What is the Suncatcher Gigablox max win?

The maximum win from a single spin here is 1,430 x your total stake. In essence, you can win 500 x stake per spin but then a 500 x stake bonus applies. You can also win from the respins leading to a screen full of wilds.

The Gigablox feature sees linked reels that display 2×2 and possibly 3×3 colossal symbol blocks that are the equivalent of 4 or 9 standard symbols. You’re guaranteed to land at least 1 Gigablox on each spin.

How does the Wild Respins feature work?

Land a wild and the Wild Respins feature triggers. The wild expanded to fill the reel. A respin is award with the expanded wild locking in place. Fill all 5 reels with expanding wilds for a 500 x bonus prize on top of your winnings.