Join a madcap mole going digging for riches in the Moley Moolah slot, a 5 reel, 10 payline game from Yggdrasil Gaming. On any spin you could see the Mole appear above the reels. This triggers the Wild Reels modifier which can turn entire reels wild. The main attraction is the Free Spins feature though. The initial free spins are played on a single machine. Collect acorns throughout the round to bring 2, 3 or even perhaps 4 sets of reels into play at the same time. You could also land a special bonus prize here. Find out more about this rather zany slot in our detailed Moley Moolah review.

Where to Play Moley Moolah Slot

The Moley Moolah slot starts with 5 reels, 3 rows and 10 paylines. To form a win, you need 3 or more matching symbols from left to right (and beginning from reel 1) across any of the 10 paylines.

Wager levels here range from between 25p and £100 per spin. Just click on the red Stake button and adjust accordingly. Press the blue button next to the spin button for autoplay. You can run up to 100 autospins. Loss stop limits are required. You can also set win stop limits. You can also play in turbo mode via the settings tab.

The Moley Moolah RTP is 95.74% which is a little below average but not massively so. The hit frequency rate of 24.89% means that on average, you’ll land a winning combination on around 1 out of every 4 spins.

This isn’t the most volatile slot you’ll play. The Moley Moolah volatility is in the medium range, offering a balance between payout size and frequency. The most you can win from a single spin is a hefty 6,750 x your total stake. 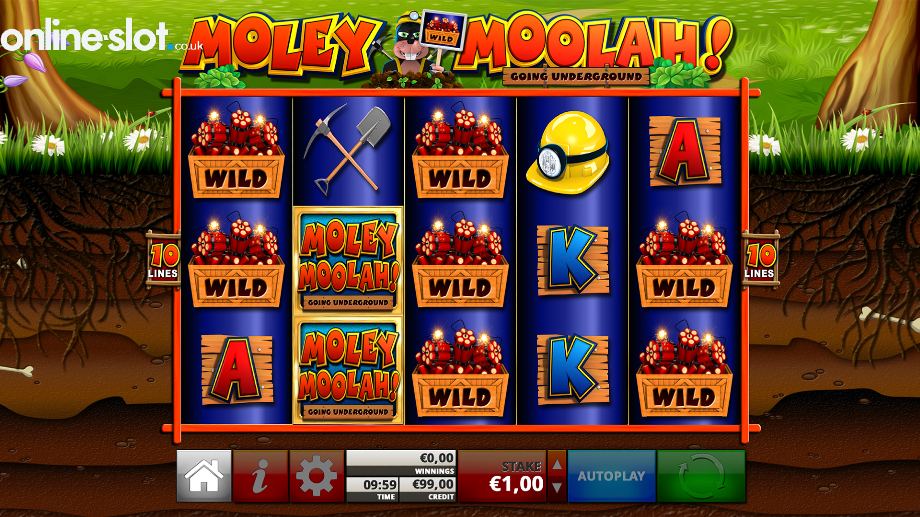 A garden in the quiet English suburb of Molesworth is the setting for the Moley Moolah slot. There’s a very light-hearted, cartoonish feel to the sound and the visuals. The imagery here is bright, bold and very simply done. The game has been produced in co-operation with Reflex Gaming so will look different to other Yggdrasil Gaming slots.

There’s a similar story with the soundtrack. It’s not the usual lush orchestral soundtrack we’ve come to expect in many slots. This something far more in keeping with the rather slapstick theme. It’s all very simple but it works well enough.

The reels here include lower value A to J symbols alongside a miner’s helmet, picks and shovels, sunflowers and a cheery looking garden gnome. The most rewarding symbol is the Moley Moolah logo which pays 3, 10 or 50 x stake if you land 3, 4 or 5 across a payline. The sticks of dynamite symbol is the main wild. The bonus scatter symbol (the Mole) is a second wild.

Moley Moolah is available to play on all devices including mobile. The madcap gameplay, bold visuals and simple soundtrack work well on the smaller screen devices.

The theme here is a bit bonkers and that’s the case with the gameplay too. There are a couple of extras on offer here, starting with the Wild Reel modifiers. It’s the free spins feature where things can really start to motor though.

On any spin, you could see an animated mole appear above the reels holding a wild placard. The reels shake and turn a whole reel wild in the Wild Reels feature. Multiple quakes mean multiple wild reels. A payout calculation is made with the wilds in position.

Occasionally, you’ll be teased with a false feature trigger. The mole appears but instead of adding the wild reels, he instead shakes his head and decides to go back home. 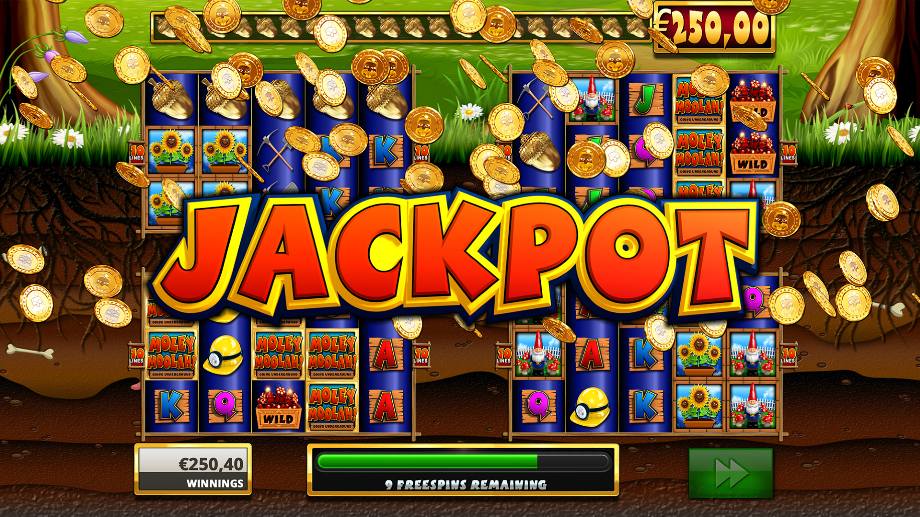 The bonus scatter symbol serves a dual role. It acts as a wild when it makes up part of a winning combination. Land 3 of them on the same spin and you’ll trigger the Free Spins Bonus feature. Your reward is 12 free spins. These play out on a single set of 5 reel, 3 row, 10 payline reels.

Joining the standard symbols during the free spins round is the golden acorn. Each time one of these appears, it is collected in a meter.  Once you’ve collected 5, 10 or 15 Golden Acorns, more reel sets open up. There’s a cash prize if you collect 20 Golden Acorns too:

If you like playing slots full of mystery and sophistication, this will be one to swerve. The Moley Moolah slot is brash, slapstick and very silly.

The colourful design is simple and bold and the Free Spins Bonus feature can be worth landing, especially if you manage to get on a decent run with the Golden Acorns and manage to get extra sets of reels up and running.

We imagine Moley Moolah will be something of an acquired taste. If you fancy a zany, rather madcap slot, you’ll find just that here. If you want garden fun, the Fat Rabbit slot by Push Gaming is highly recommended.

What is the Moley Moolah RTP?

The Moley Moolah return to player rate is 95.74% which is a little below the 96% average. Medium variance, the hit frequency is 24.89% meaning you’ll land a winner every 4 spins on average.

What is the Moley Moolah max payout?

The most you can win is 6,750 x your total stake. This can be won in the free spins where collecting Golden Acorns can see you play with up to 4 reel sets.

Is there a Moley Moolah free spins feature?

Yes, land 3 Mole Bonus symbols on a base game spin and you’ll trigger the Free Spins Bonus feature with 12 free spins. Collecting Golden Acorns can bring 2, 3 or even 4 extra sets of reels into play. Amass 20 Golden Acorns during the feature and you’ll win a 250 x stake cash bonus on top.

Are there any other Moley Moolah features?

On any spin you could benefit from the Wild Reels feature. The Mole appears above the reels and the screen shakes to create a wild reel. Multiple shakes means multiple wild reels.