Cascading and expanding symbols can combine to potentially spectacular effect in the Jaguar SuperWays slot, an innovative release from Bad Dingo and Yggdrasil Gaming. The base game action begins with 5 reels and 243 ways to win. Pawprints appear on symbols and open up additional reels and symbols. At their maximum, you’ll have 387,420,489 ways to win. That’s not a misprint. The other main element is the Free Spins feature where you can win up to 20 free spins which start on a machine that offers 1,024 ways to win. The game grid can expand here too. Find out more about this exciting jungle trek in our full Jaguar SuperWays review.

Where to Play Jaguar SuperWays Slot

The Jaguar SuperWays slot is played with 5 reels, 3 rows and 243 ways to win. To create a winning combination, you need to land 3 or more matching symbols on adjoining reels, starting from reel 1. As the reels expand via the pawprints, the ways to win can increase massively to boost your winning chances.

Stakes here range from between 40p and £80 per spin. From the setting tab click on the pile of coins then choose from the range of stakes displayed. If allowed in your country, there’s an Autoplay function. You can also opt for Left Hand Mode where the spin button is on the left.

The Jaguar SuperWays RTP is 94.3% which is low and disappointing compared to most slots. Medium variance, you’ll land a winning combination pretty often too. The hit frequency rate is 41.28% which is quite high. The maximum win is 22,457 x your total stake from a single spin. 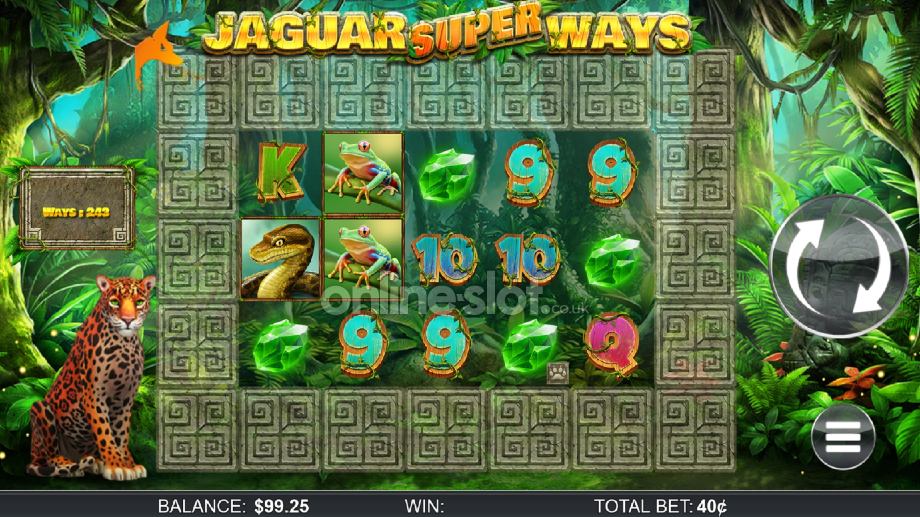 The jungles of South America are the setting for the Jaguar SuperWays slot. The reels are set against a backdrop of dense green rainforest foliage. Watching over proceedings is the South American jaguar.

There’s an electro-style soundtrack playing while you spin which sounds more Miami Vice than David Attenborough. You’ll hear the hum of the jungle and the occasional roar of the jaguar which can be a little unnerving.

The reels are made up of brightly coloured A to 9 royals which are covered in jungle creepers. They’re joined by a green gemstone, a frog, a snake and a bird. The bird is the most rewarding symbol, paying 12.5 x your stake if you land 9 in combination.

When the reels reach their full 9×9 configuration, the symbols can look rather small when playing on a mobile. The colourful visuals are up to the task though. There are loads of moving parts here but the Jaguar SuperWays mobile slot works pretty well. It’s recommended to play on a laptop or PC in order to gain the full experience.

With 2 bonus features, central to the action here is the SuperWays game mechanic. This can increase the size of the reels to 9×9 which takes the ways to win over a mind boggling 387 million. The other feature highlight is the free spins. 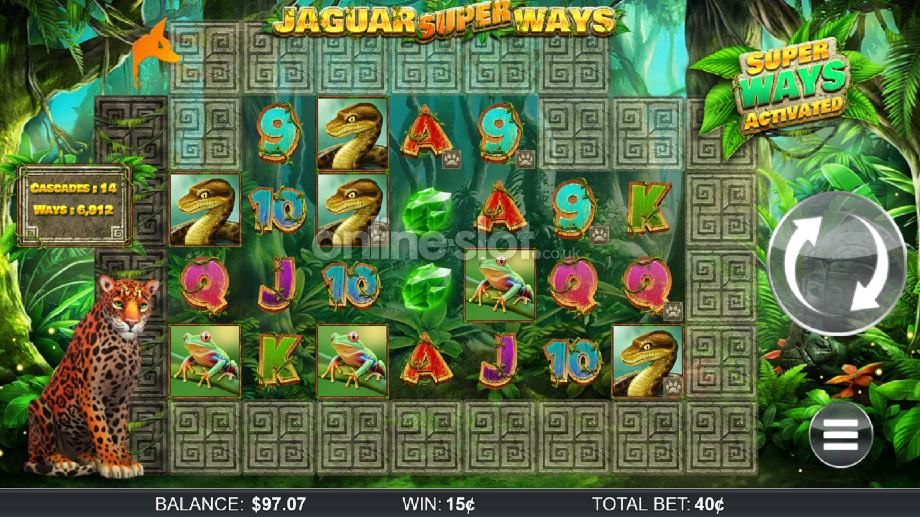 Every spin begins with 5 reels, 3 rows and 243 ways to win. Some symbols come with pawprints on them. Land a winning combination that includes a symbol with a pawprint and you’ll trigger the SuperWays feature. A large pawprint then appears on the original symbol with the small, triggering pawprint.

As pawprints open up more and reels and rows, the number of ways to win increases. If the game grid reaches its maximum configuration, you’ll be playing on a 9 reel, 9 row machine that offers 387,420,489 ways to win. Yes, that’s over 387 million. 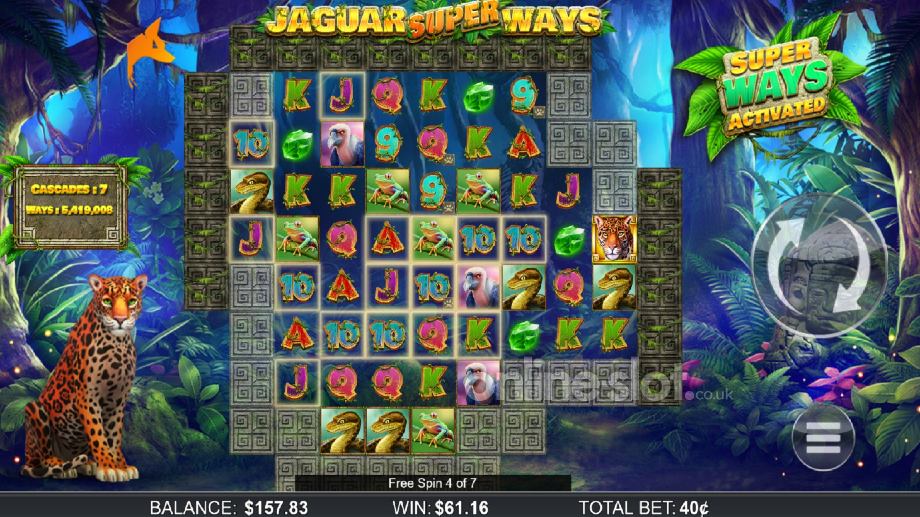 The Free Spins feature triggers when you land 3 or more temple scatters in the same series of cascades. The more scatters, the more free spins:

These free spins play out on a 5 reel, 4 row machine that offers 1,024 ways to win.  More importantly, you can trigger the SuperWays feature during the free spins. This can massively increase the number of ways to win up to 387,420,489.

The wild jungle theme is a very popular one in the online slot world. The Jaguar SuperWays slot offers something different from the norm thanks to the SuperWays mechanic. Get on a good run with the pawprints and the number of ways to win can rocket.

However, the max win of 22,457 x your total stake per spin doesn’t quite match to over 387 million ways to win. Then the 94.3% RTP rate is very low, considering it’s Bad Dingo’s first release.

Another game to have a huge potential number of ways to win is Nitropolis (by ELK Studios). With 85,155,840 ways to win, it’s much more polished graphically and offers better bonus features. However, the max win of 10,000 x stake is much lower than in Jaguar SuperWays.

This mechanic has potential and I’m sure Bad Dingo/Yggdrasil Gaming will release more with the SuperWays mechanic. Unfortunately, Jaguar SuperWays just isn’t it. If you want more interesting trek into the jungle, Gonzo’s Quest Megaways is a good place to start.

What is the Jaguar SuperWays RTP?

The Jaguar Super Ways return to player rate is 94.3% which is low compared to the 96% average. Medium variance, you’ll get a win pretty often as the hit frequency rate is 41.28%.

What is the Jaguar SuperWays max win?

Jaguar Super Ways can give you top wins of 22,457 x your total stake per spin. The key to winning big is by increasing the number of ways to win, to over 387 million.

Land a win with an overlaid pawprint and it expands the size of the game grid. Known as the SuperWays feature, you could play with 9 reels, 9 rows and up to 387,420,489 ways to win.

Are there any Jaguar SuperWays free spins?

Yes, collect temple scatter symbols over a single cascade to trigger the Free Spins feature. With up to 20 free spins available, the SuperWays can increase your number of ways to win to 387,420,489.