Powered by Yggdrasil Gaming, the Hades: Gigablox slot is a 6x6 game with 50 paylines. With a Greek mythology theme, you join the king of the Underworld in this dark and superbly designed game. With blocks of symbols up to 6x6 in size, Hades randomly takes on monsters to transform those symbols into wilds. It’s all about the Hades Wild Hunt feature where Hades battles monsters on every free spin. This fills the Cerberus Multiplier meter which gives you more free spins and increases the win multiplier up to 10x. With an RTP of 96%, you can win up to 11,129 x stake on each free spin.

Where to Play Hades: Gigablox Slot

The Hades: Gigablox slot is played on 6 reel, 6 row grid with 50 paylines. All winning combinations pay from left to right, starting from reel 1, and required 3 to 6 matching symbols.

Stakes range from 10p to £100 per spin. There’s an Autoplay function where you can select between 10 and 1,000 autospins. There’s also an infinity option. In the Settings tab, you can choose the volume level and whether you have sound effects, ambience sound and voice overs or not. You can also determine the spin speed and stop autoplay via balance increase/decreases, when you activate the Free Spins feature or on a single win limit.

Variance wise, Hades: Gigablox is a highly volatile slot. With most wins coming in the base game, the bigger wins will come in the Free Spins feature due to the multipliers on offer. With an RTP of 96%, the hit frequency is 20.5% meaning just over 1 in 5 spins will result in a winning combination. It’s high risk but this trip to the Underworld is worth undertaking as the max win is 11,129 x stake per free spin. 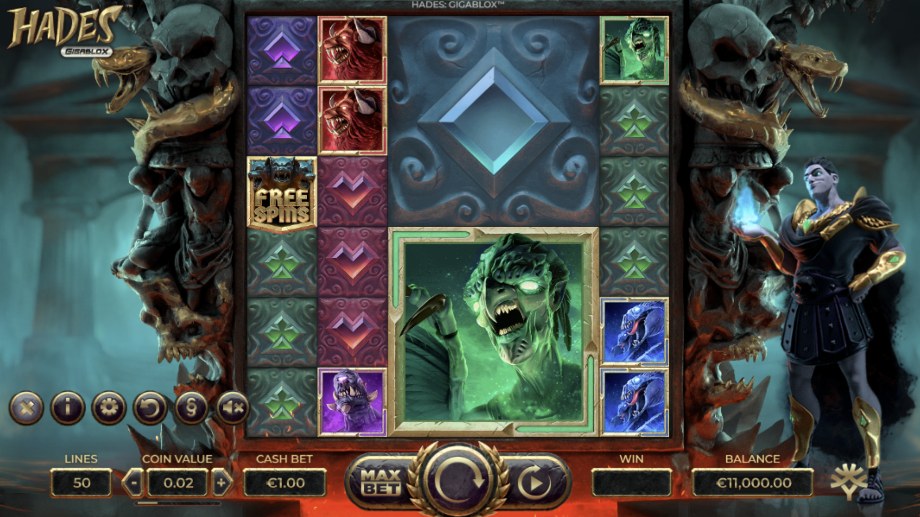 The Hades: Gigablox slot is set in the Underworld which is the supernatural world of the dead. You join Hades, the king of the Underworld, in this Greek mythology themed adventure. Dark and with a sinister feel, the high definition graphics show Hades to the side of the reels.

The soundtrack is intense and adds to the dark atmosphere. Surrounding the reels are skulls and skeletons wrapped with gold snakes. You’ll also hear Hades commenting as you spin the reels – you’ll either love it or hate it.

On the reels you will come across low value diamond, spade, club and heart symbols.  You’ll also see various monsters as the high value symbols. The Chimera symbol is the most rewarding giving you 0.6, 1.6, 3.2 or 8 x your total stake for 3, 4, 5 or 6 in combination.

There is also a gold Chimera wild symbol which substitutes for all regular symbols. However, it can only be rewarded in the Hades Wild Hunts feature (more details below).

As you’d expect, the Hades: Gigablox slot can be played on desktop, mobile and tablet devices. It’s a real feast for the sense even on smartphone screens.

The Hades: Gigablox slot comes with 4 bonus features. With symbols appearing in blocks up to 6×6 in size, Hades can randomly battle monsters to transform them into wilds. This applies on each free spin where this fillers the Cerberus Multiplier meter. This can lead to 10x multipliers on every free spin. 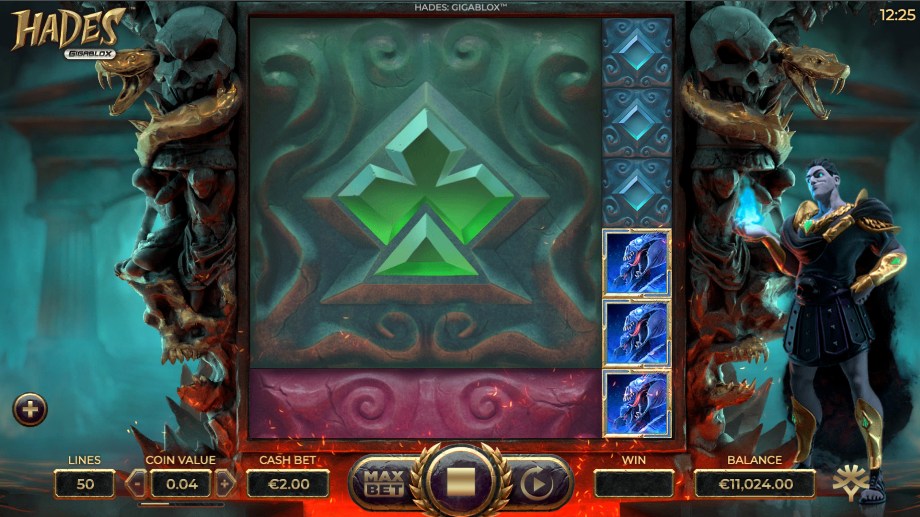 This game is the second slot to use the Gigablox feature/mechanic. This block feature randomises the size of symbol blocks appearing on the reels. The blocks can appear as 2×2 up to 6×6 in size. The bigger the block, the bigger the potential wins. 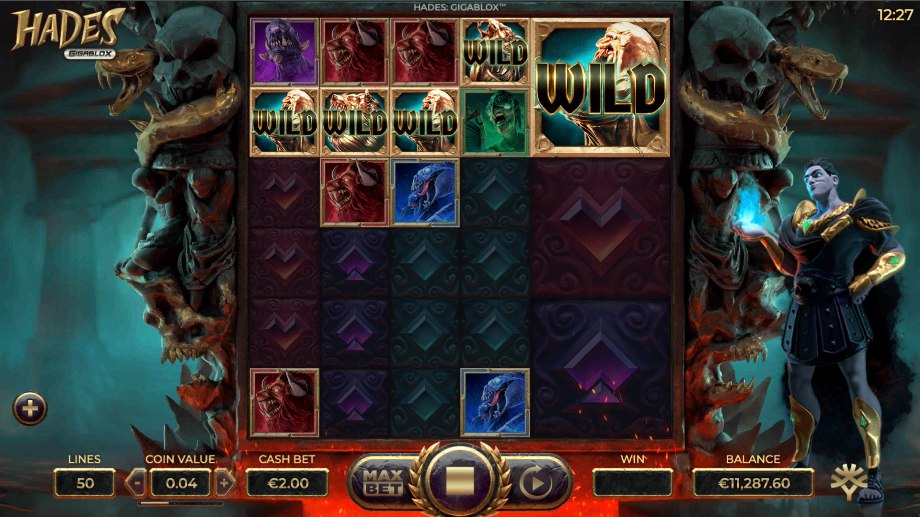 During any base game spin, the Hades Wild Hunt can trigger randomly. The reels then go dark and reels land. Hades then jumps into the reels and fights with the high value monster symbols. If Hades wins the fight against a monster, that monster symbol transforms into a wild symbol. This also applies to blocks of monster symbols. 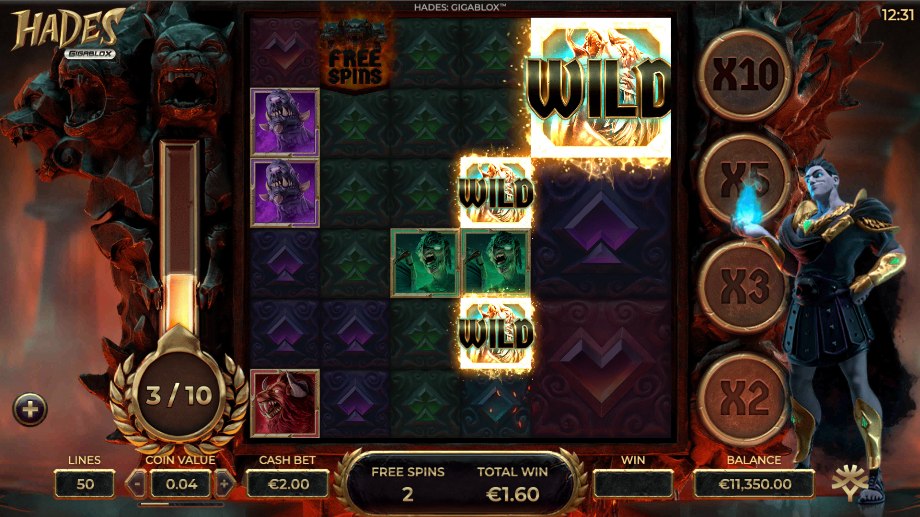 In order to trigger the Wild Hunt Free Spins feature, you need to land 5 or more free spins scatters. With scatters also appears in blocks, you could land a 6×6 scatter block which would result in 36 free spins. The minimum you’ll begin with is 5 free spins (for 5 scatters). During the feature, each scatter landing will add 1 more free spin to your tally, with no limits.

Every fight Hades wins adds points to the Cerberus Multiplier meter. If Hades fights a 2×2 block for example and wins, the block will count as single symbols (so 4 symbols).

Known as the Cerberus Multiplier feature, this increases the win multiplier on each free spin up to 10x. For every multiplier level you reach, 2 more free spins are won:

Yggdrasil Gaming debuted the Gigablox mechanic/feature with the Lucky Neko: Gigablox slot. Hades: Gigablox is visually much better and has more bonus features. With the Greek mythology theme proving very popular amongst slot players, this game will surely be more appealing.

With max wins of 11,129 x stake per free spin, this dark trip to the Underworld is a highly risky one. It will take approximately 400 spins to trigger the Wild Hunt Free Spins feature. The rewards can be worth it though.

If you want Greek mythology action, Playtech’s Age of the Gods slot has plenty of bonus features, big win potential as well as 4 progressive jackpots.

What is the Hades: Gigablox slot RTP?

The Hades: Gigablox slot has a return to player rate of 96%. Average for an online slot, the hit frequency is 20.5% meaning just over 1 in 5 spins will give you a win.

What is the Hades: Gigablox max payout?

The biggest possible win from the Hades: Gigablox slot is 11,129 x your total stake. This can be achieved in the Wild Hunt Free Spins feature where multipliers up to 10x can apply if Hades wins his battles against the monsters.

Are they any Hades: Gigablox free spins?

Yes, you can begin the Wild Hunt Free Spins feature with up to 36 free spins. Once in, the Hades Wild Hunt feature applies on each free spin. Each win add points to the meter. Each meter you fill triggers the Cerberus Multiplier feature where the multiplier can reach 10x and adds 2 more free spins.

How does the Hades Wild Hunt feature work?

Randomly triggered in the base game, Hades jumps into the reels and battles the monsters. Each victory turns those monster symbols into wilds. The Hades Wild Hunt feature also applies on each free spin but fills meters to give you multipliers up to 10x.