WMS is back with another addition to its series based on the hugely popular board game with the Monopoly Utility Trails slot. Played using an 8 reel, 7 row, cluster pays, cascading reels game engine, it’s packed full of complex features. Land multiple wilds on the same column or row and all the symbols in between turn wild too. Better still is the Wild Tracks feature which turns whole blocks of symbols wild. Other highlights include Community Chest cash cards which deliver instant wins of up to 1,000 x stake, streak respins with modifiers and an Electric Company feature where property cards, houses and hotels can deliver some big rewards. You can also land a 1,000 x stake prize here. Find out more in our full Monopoly Utility Trails review.

The Monopoly Utility Trials slot is played on an 8 reel, 7 row grid with a Cluster Pays engine. Winners are created by landing clusters of matching symbols or wilds. After a cluster is formed a cascade follows where the triggering symbols are removed from the grid and new ones drop in and replace them. These cascades continue as long as a new winner is created.

Stake levels here range from between 20p and £4 per spin. Use the + and – buttons to the right of the reels to adjust your stake. There’s an Autoplay function which may not be available in your country (not valid in the UK from October 2021).

The Monopoly Utility Trials RTP is 96.79% which is well above average. The variance is medium to high but with frequent winning combinations landing. The max win is £250,000 in total, irrespective of the stake/bet you’re playing at. 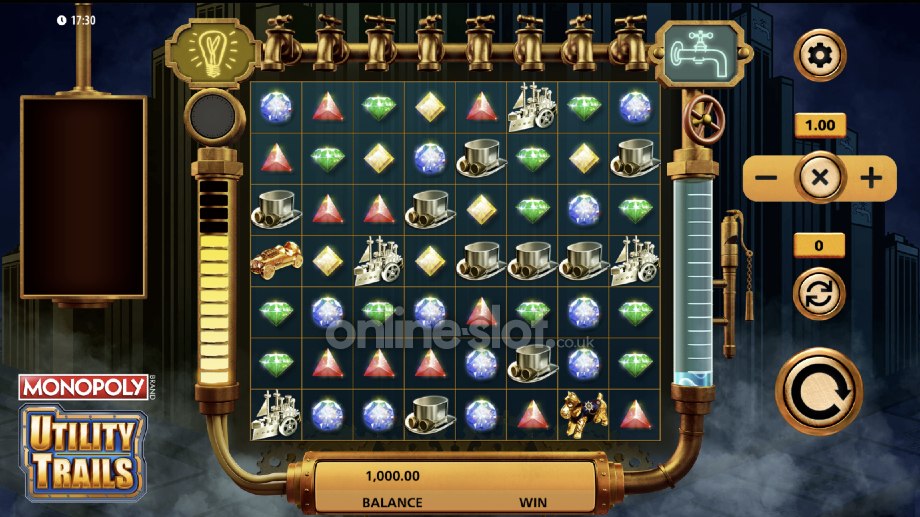 The design in the Monopoly Utility Trials slot combines the familiar and the unusual. Based loosely on the Monopoly board game, the game grid is set within pipes and taps and has an industrial feel. Not your standard setting for a Monopoly slot.

There’s a glossy, shiny look to the design here which is just what we’ve come to expect from the slots in this franchise. There’s a rather bold and brassy big band soundtrack blasting away while you spin. It has a vintage feel and matches the theme nicely.

More familiar are the symbols. On the grid you’ll find 4 lower value gemstones and 4 familiar Monopoly token symbols. You have the top hat, ship, Scottie dog and classic car. The car is the highest paying symbol. Land a cluster of 15 or more of the car in the base game for an award of 250 x your total stake.

There’s also an assortment of wilds that substitutes for the standard symbols. Gold Wilds can create lines and boxes of wilds for even bigger potential rewards.

You can play Monopoly Utility Trials on mobiles, tablets and desktop devices. There’s a lot going on here thanks to the oversized game grid but the imagery is good enough if you’re playing on a smaller screen.

If you like slots that offer plenty of complex features, you’ve come to the right place with Monopoly Utility Reels. With 5 bonus features, there’s plenty going on here thanks to the wild extras and the pair of triggered bonus extras.

The Wild Tracks feature becomes active when you land more than 1 golden wild in the same row or column. The symbols in between the 2 triggering wilds also turn into carriage wilds and a new payout consideration is made with the extra wilds in position.

You can land even bigger clusters of wilds if you manage to land wilds in a square formation. When a square wild formation happens, all the symbols within the square turn into carriage wilds. Any carriage wilds that don’t form part of a winning cluster following a cascade turn into golden wilds and stay in position.

The colossal Community Chest 3×3 symbols can land at random on any spin. Triggering the Community Chest feature, this symbol then opens to reveal a cash prize which can be anything between 5 and 1,000 x your total stake. 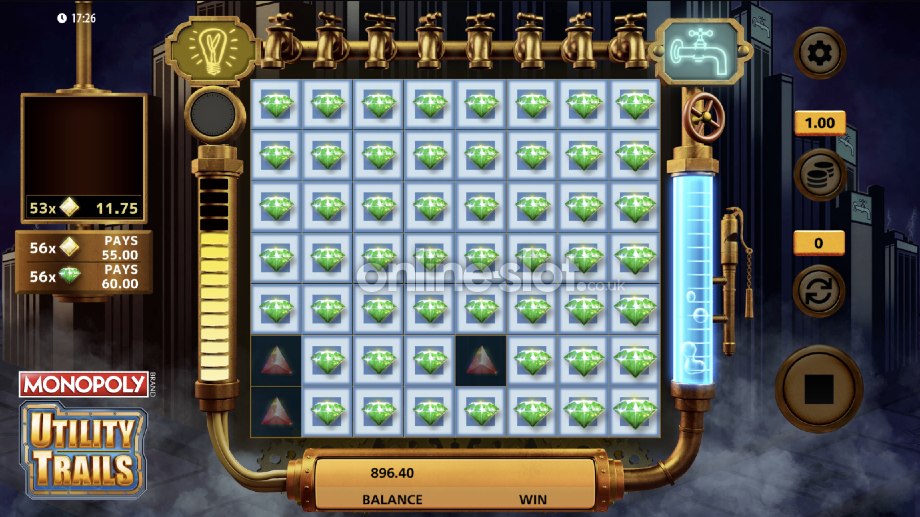 On any spin, you could see the taps above the reels whirr into life to deliver a modifier. If there are clusters made up of different symbols, the first modifier transforms them so they’re all made up of the same matching symbol. This offers the potential to create even bigger clusters.

If all the symbols are already the same, the second modifier delivers an upgrade, turning all the symbols in the cluster into a more valuable one. The feature ends when there’s a spin where no new matching symbols joins a winning cluster or there’s no trigger of the water tap. 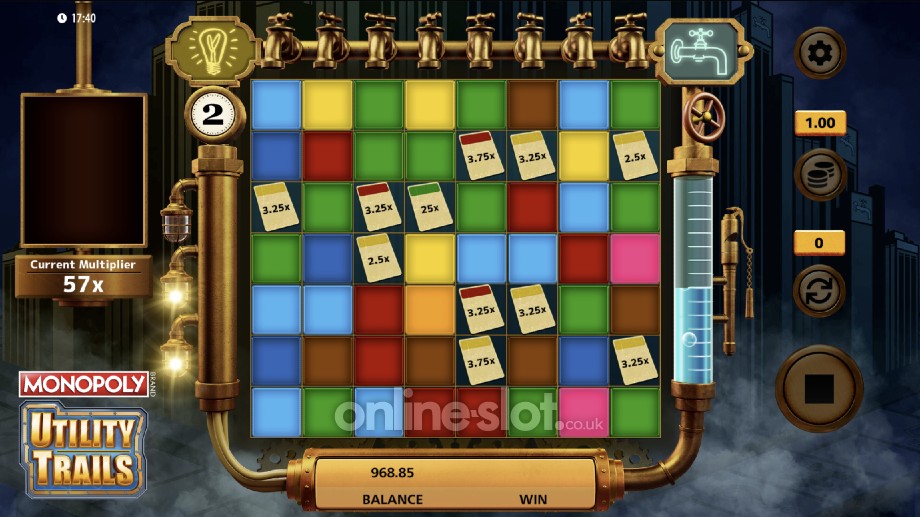 The game’s Electric Company feature is triggered in a similar manner to the first. Fill the meter to the left of the reels by collecting Electric Company symbols. During this feature, the standard symbols on the grid are replaced by the following:

You’ll lose a life following a spin where no new Property Tile, Colour Tile or Chance Card lands. The Property Tiles are held and the reels spin again. The feature ends when you’ve used up all 3 of your lives. The value of all the Property Cards is added together to give you an overall prize.

Off the Rails Jackpot feature

WMS doesn’t do things by half with their Monopoly-themed games. The Monopoly Utility slot combines the usual glossy design with a range of unusual features. This isn’t your standard land 3 scatters and get 10 free spins kind of slot. There’s a lot going on here so if you get the opportunity, take the Monopoly Utility Trials demo for a test drive.

The wild extras and the Community Chest extra can rev up the base game. The biggest wins will come from the Electric Company feature though. The Off the Rails Jackpot of 1,000 x stake is also a welcome addition.

I was a bit overwhelmed when I first started playing Monopoly Utility Trials. When you’ve got used to the rather madcap gameplay, there’s enough to like here to make this game worth a spin. However, there are better Monopoly slots available.

My recommendation would be Monopoly Megaways by Big Time Gaming which offers 14,700 x stake wins on each spin. If it’s cluster pays slots you’re after, Jammin’ Jars from Push Gaming is a much better game.

What is the Monopoly Utility Trails RTP?

The Monopoly Utility Trials return to player rate is 96.79% which stacks up pretty well. That’s a well above average figure. The variance is medium to high.

What is the Monopoly Utility Trails max win?

The maximum win is capped at £250,000. This is quite common in WMS slots. The bigger wins will come from the bonus features, especially the Electric Company feature.

What are the Monopoly Utility Trials bonus features?

With 5 bonus features, there are wild extras, Community Chest wins of up to 1,000 x stake, streak respins with modifiers and a bonus round based on the classic Monopoly property cards, houses and hotels.

Is there a Monopoly Utility Trials demo?

Yes, the Monopoly Utility Trails free play version is available here at Online-Slot.co.uk. You can sample the unusual gameplay and multiple bonus features on mobile, tablet and desktop devices.