The Monopoly Electric Wins slot is a feature-filled game from WMS that’s based on the ever-popular board game. Boasting flashy, neon design, it’s played using an unusual 6 reel, 729 ways to win game engine and come with a Monopoly board game element that can deliver an assortment of extras including multiplier wilds, mystery symbols, colossal symbols, wild extras and high value symbol only spins. There’s also a free spins feature where working your way around the famous board can deliver even more prizes. Find out more about this low variance slot in our in-depth Monopoly Electric Wins review.

The Monopoly Electric Wins slot uses a 6 reel, 729 ways to win mechanic. Landing 3 or more matching symbols or wilds on adjacent reels, starting from the leftmost reel to form a winner.

You can play at stake levels of between 20p and £15 per spin. There an Auto Play facility where you can choose up to 100 auto spins. You can also implement single win limits and loss limits if desired.

The Monopoly Electric Wins RTP is 96.51% which is higher than the 96% average. Furthermore, this isn’t a particularly volatile slot. The variance is in the low to medium range. This will ensure your bankroll lasts a relatively long time when compared to the high RTP rate.

The maximum win from a base game spin is 150 x your stake. With the multiplier wilds on offer, the max win rises to 1,000 x your total stake. 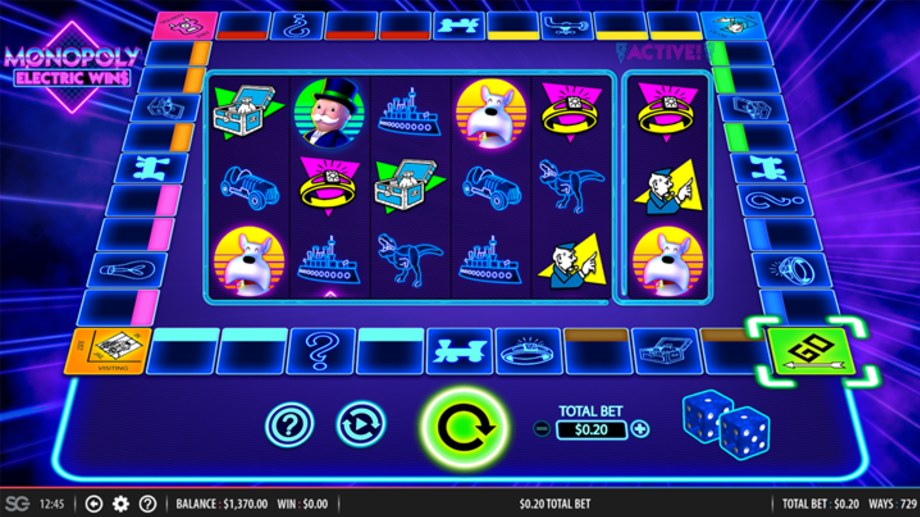 The classic Monopoly set up has been given a flashy neon makeover in the Monopoly Electric Wins slot. The reels in the centre of the screen are surrounded by a Monopoly board made up of the usual coloured properties, railway stations, utility companies, Chance, Community Chest, Free Parking and Go to Jail squares.

The reels include Monopoly tokens including the top hat, dinosaur, car and steamship. There’s also the jailer, ring, money chest, dog and Mr Monopoly. The Monopoly logo symbol is the most rewarding, awarding 5 x your total stake if you land 6 in combination.

There’s a neon wild symbol which substitutes for all symbols except the electric bulb scatter symbol. It appears on reels 1, 2, 3, 4 and 5 (not reel 6 basically).

The board game was invented 85 years ago but there’s fresh, modern look to this slot incarnation. That’s the case regardless of what devices you’re playing on. Monopoly Electric Wins is available to play on desktop, tablet and mobile.

Like many slots in this franchise, there’s plenty going on in the Monopoly Electric Wins slot. The Monopoly board element can deliver a whole raft of modifiers. There’s also a classic free spins round where extra cash prizes are on offer via the board.

As mentioned above, the neon wild symbol can land on reels 1 through 5 only. As well as replacing symbols, landing a 2x wild in a winning combination will double your win.

If there’s more than 1 wild on display, the multipliers are added together. If you were to land three 2x wilds in a combination, you’d benefit from a 6x multiplier for example. The final payout is then boosted by the combined multiplier.

Finally, if an Electric Bulbs symbol lands on reel 6, all wilds on the reels will transform into 2x wilds.

Around the reels, you’ll see a Monopoly Board. On each spin, you’ll roll 2 dice and work your way round the board. If you land on a property that’s unowned, it becomes owned.

When you own all properties of 1 colour, you’ll be able to develop properties by adding houses and hotels. These can add extra awards when you trigger the free spins. We’ll look at the Monopoly Board features first though:

The Free Spins Bonus feature is triggered when you have a full set of 2 or 3 hotels on properties of the same colour. You’ll then roll the dice which determines how many free spins you’ve been awarded. This will be between 4 and 16 free spins.

You’ll roll the dice on each free spin, working your way around the board. Land on properties to win cash prizes. The values of these prizes depend on which property you land on.

Just like in the board game, the dark blue properties pay the most (up to 25 x stake) and the brown properties the least. Prizes also depend on how many houses or hotels are built on them. When the free spins are completed, all developments are removed from every property and you’ll start afresh.

The Monopoly Electric Wins slot comes with a wide range of extras. It can feel a bit complicated to begin with so if you get the opportunity to try this slot in demo mode, we recommend that you take it. The features, when they do come along, are decent enough and provide plenty of variety.

This isn’t a very volatile slot with the variance in the medium to low range. This means your bankroll should last a long time. The bigger wins will come in the free spins and can result in a 1,000 x stake payout.

We’ve found previous Monopoly slots to be a little overdone. For all its lovely visuals, Monopoly Electric Wins falls into the same category. If you want a game with real win potential and a variety of features, Big Time Gaming’s Monopoly Megaways slot is the only Monopoly game you should play.

What is the Monopoly Electric Wins RTP?

The Monopoly Electric Wins return to player rate is 96.51%. This is high compared to the 96% slot average. It’s low to medium variance wise so your money should go a rather long way.

What is the Monopoly Electric Wins max win?

The most you can win from a single spin in the base game is 150 x stake. This rises to a maximum win of 1,000 x stake in the Free Spins Bonus feature.

Is there a Monopoly Electric Wins free spins round?

Yes, trigger the Free Spins Bonus feature and you’ll play up to 16 free spins. Work your way around the board to win cash prizes which vary depending on the property and how many houses and hotels are built there.

How do the Monopoly Board features work?

With every spin, you roll 2 dice to move around the Monopoly board. Landing on various squares will give you a Monopoly Board feature including transforming Chance symbols, 2×2 or 3×3 colossal symbols that can become wild, lower value symbols removed and extra wilds.