Based on the ancient Greek king who was cursed as everything he touched turned into gold, the Midas Golden Touch slot is a 5 reel, 15 payline game from Thunderkick. Superbly designed as usual for a slot from this developer, it comes with some pretty nifty gameplay too. Land a win that includes a wild and it gets a multiplier boost of up to 32x. Trigger the Bonus Game feature for up to 30 free spins with a wild added to a random position on the reels on each of them. Each win during the free spins triggers a streak respin which continue as long as a new matching symbol joins the original sinning cluster. Find out more in our detailed Midas Golden Touch review.

The set up in the Midas Golden Touch slot is simple. The action plays out with 5 reels, 3 rows and 15 fixed paylines. Landing 3 or more matching symbols or wilds across a payline will create a winning combination.

Stake levels in Midas Golden Touch range from 10p to £100 per spin. Click on the coin in the bottom right-hand corner of the screen to adjust your bet level. Next to that is the autoplay button which allows you to run a specified number of games without having to click the spin button.

The Midas Golden Touch RTP is a pretty standard 96.1%. The volatility is in the medium to high range with the maximum win coming in at 10,100 x your total stake.

Theme – Audio and Design Features – will King Midas turn everything to gold? 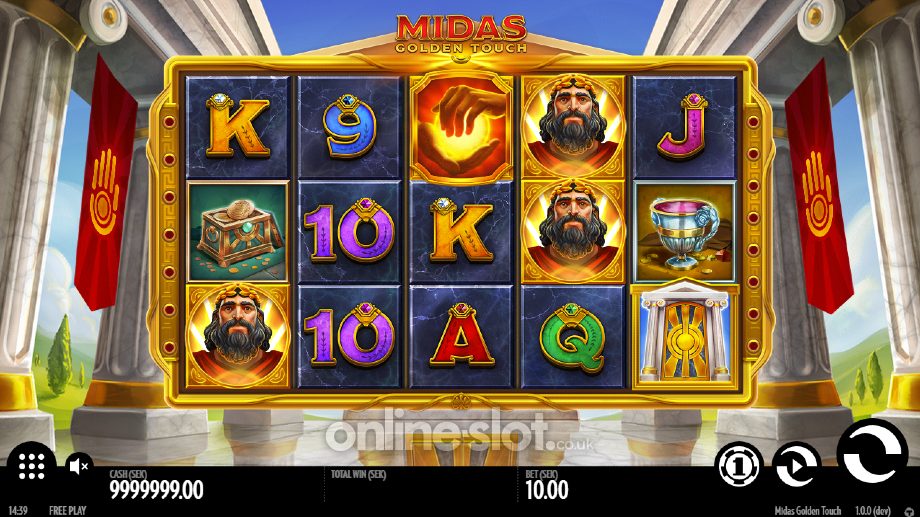 Thunderkick is among the market leaders when it comes to the design of its games and the Midas Golden Touch slot is another treat for the senses. With a Greek mythology theme, it’s based on the famous King Midas who is known for his ability to turn everything he touched into gold (hence the Midas touch).

With so much gold on display you might imagine the visuals here to be a bit too blingy. In fact, it’s all very tasteful and comes together very nicely. The setting is King Midas’s beautiful marble palace. This transforms into gold when you trigger the feature.

The reels are made up of lower A to 9 royal values which appear alongside a treasure chest, a chalice and a golden crown. The bearded figure of King Midas is the most lucrative standard symbol, awarding 10, 20 or 75 times your stake if you land 3, 4 or 5 on a payline.

You can try and turn everything you touch into gold on all devices including computer, tablet and mobile. Thunderkick puts lots of effort into the look of their releases and that’s clearly evident in the Midas Golden Touch mobile slot which is very nicely done.

The range of extras on offer in this ancient adventure isn’t enormous. What is on offer is nicely done. Boosting your winning chances are wilds that come with multipliers attached. The main feature involves free spins with at least 1 added wild. Each win in the free spins brings a streak respin bonus into play too.

The hands holding a gold object symbol is the wild. This replaces all the standard symbols when it makes up a winning combination. The wild also delivers a multiplier boost. The more wilds on display, the bigger that multiplier gets: 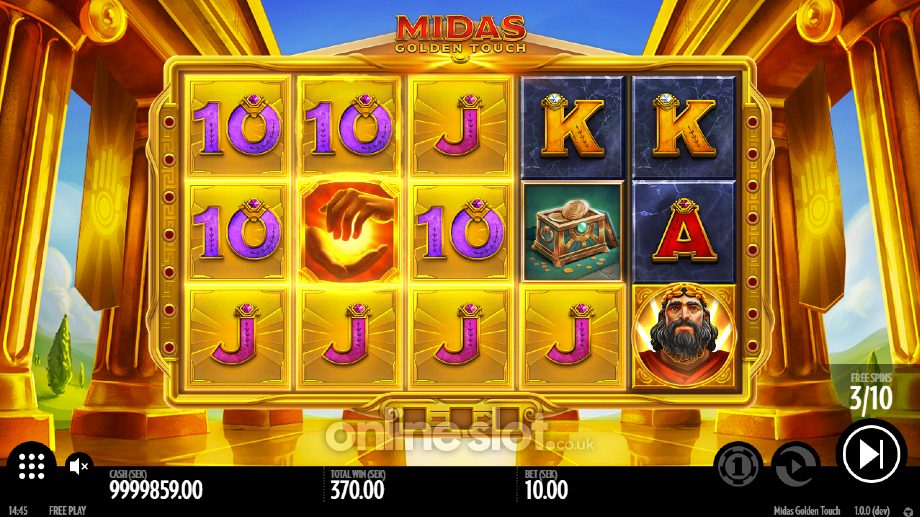 The door to Midas’s marble palace is the scatter symbol. Land 3, 4 or 5 of these on the same spin to activate the Bonus Game feature. The more scatters, the more initial free spins:

On each free spin, 1 wild is added to a random position on the reels which boosts your chances of landing a multiplier boost.

Land a winning combination during the free spins and you’ll trigger the Streak Respin feature. The winning symbols lock in position and the rest of the reels spin again. If a new matching symbol or wild joins the original winning combination, it too is held and the process is repeated. The respins continue until no new matching symbol lands. A final payout consideration is then made.

Retriggers are possible here too. Landing 3 scatters during the respins and you will win an extra 10 free spins. This will give you 30 free spins in total.

Midas Golden Touch Review Summary – all about the multiplier wilds

What was a curse for Midas could be anything but for slot players. This is a very well-crafted slot, combining superb design with some potentially exciting extras. The key to winning big is from the multiplier wilds which can reach 32x on each base game or free spin.

If you want a massive variety of bonus features, then this might not be for you. The streak respins that enhance the free spins round are a top addition though and offer plenty of potential.

Want to benefit from the Midas Touch? Try the Age of the Gods: Mighty Midas slot by Playtech which can pay up to 8,650 x stake on each free spin.

What is the Midas Golden Touch RTP?

The Midas Golden Touch return to player rate is 96.1% which is about average for a slot game. The variance is medium to high with the bigger wins coming from the multiplier wilds.

What is the Midas Golden Touch max win?

The most you can win from a single spin is 10,100 x your total stake. The key to winning big is from the multiplier wilds which can reach up to 32x.

Is there a Midas Golden Touch free spins feature?

Land 3+ scatters to play up to 20 free spins in the Bonus Game feature. At least 1 random wild is added on each free spin to bring multipliers into play. Every win triggers the Streak Respin feature which leads to bigger wins.

How do the Multiplier Wilds work?