Head to a frozen winter wonderland in the Crystal Quest: Frostlands slot. This 6-reel, 4,096 ways to win game is by Thunderkick and comes with the developer’s usual atmospheric design as well as plenty of features. Gameplay highlights include massive 2x2 and 3x3 symbols, avalanche wins and expanding multipliers. Trigger the Bonus Game feature for potentially unlimited free spins. Any wilds that land on a winless free spin will explode to create a new avalanche and hopefully, a new winning combination. The expanding multiplier doesn’t reset following a winless avalanche either. Discover more in our full Crystal Quest: Frostlands review.

The action in the Crystal Quest: Frostlands slot plays out on 6 reels, 4 rows and 4,096 ways to win. To create a winning combination, land 3 or more matching symbols or wilds on adjacent reels, starting from the leftmost reel.

Stakes range from between 10p and £100 per spin which is the same range on all Thunderkick slot games. Click on the coin symbol below the spin button then choose from the range of bet levels. There’s an Auto Play function where up to 5,000 autospins can be played. This may not be available in your country.

The Crystal Quest: Frostlands RTP is 96.16% which is slightly better than average. The setting here might be cool and a fresh but the action here can be pretty hot. The volatility is in the high range. On a scale of 1 to 10, the variance is about 8.5. The potentially maximum win from a single spin here is a very tidy 15,000 x your total stake.

Theme – Audio and Design Features – head to a frozen realm 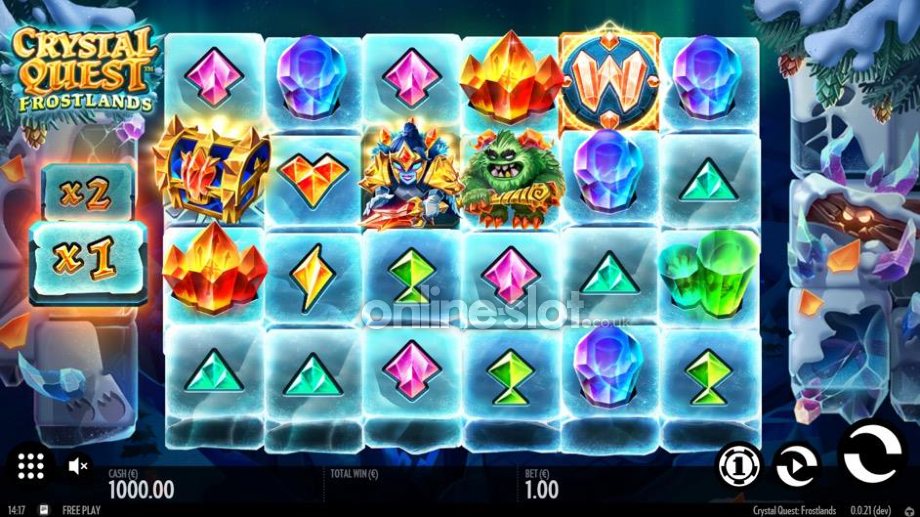 A fantastical icy world is the setting for the Crystal Quest: Frostlands slot. The 3rd game in the Crystal Quest series, the symbols appear in what look like blocks of ice. As usual for a game from Thunderkick, there’s a high spec feel to the design here.

On the reels there are 8 gemstone symbols which appear alongside the Yeti and the Feral Commander which is the most lucrative symbol. This pays 5 x your total stake if you land 6 on adjoining reels. There’s also a wild that can substitute for all the standard symbols when it makes up part of a winning combination. The final symbol is the treasure chest scatter which triggers the game’s main bonus feature.

That high spec design works especially well if you’re playing in landscape mode on a smartphone or tablet. The gameplay works nicely on the smaller screen devices too. There’s enough going on but it’s not too overwhelming. The Crystal Quest: Frostlands mobile slot is a very playable one.

Like other slots in the Crystal Quest series, it uses an Avalanche feature. Create a winner and those successful symbols are blasted off the reels and new ones drop down to replace them. A new payout consideration is made with the new symbols in place. These avalanches keep on coming as long as a new winning combination hits. 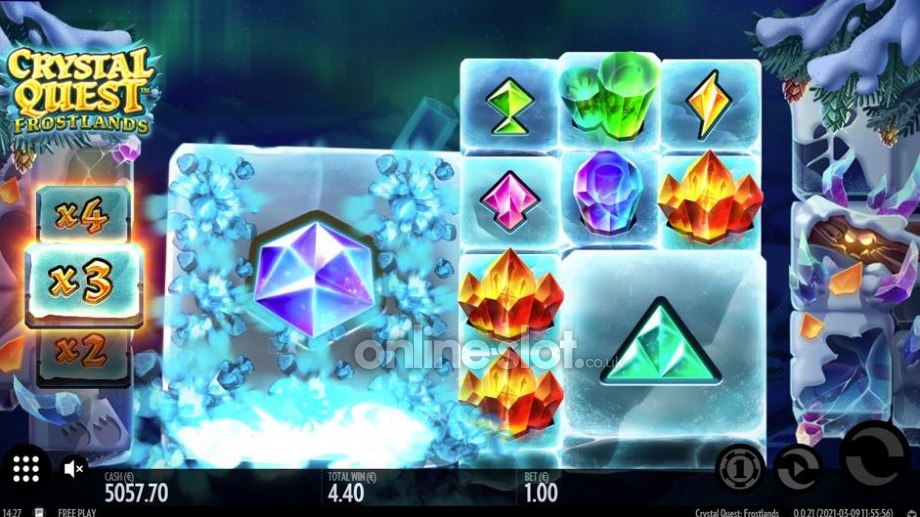 Apart from the wild and scatter, all symbols can appear in massive 2×2 and 3×3 formations which are the equivalent of 4 or 9 standard symbols. During a new drop following an avalanche, the massive symbols can drop to the bottom of the grid and crush the symbols directly below. This is known as the Massive Symbols feature. 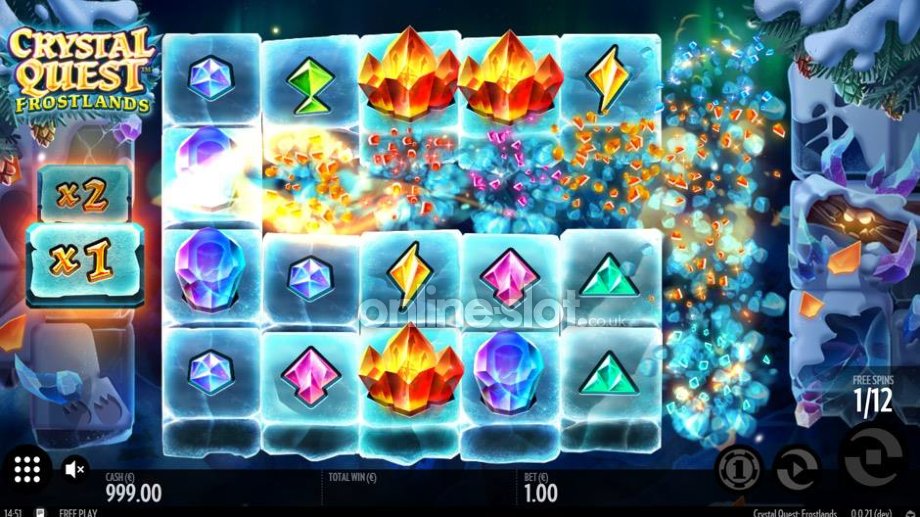 Land 3 treasure chest scatters anywhere on the reels on the same spin to activate the Bonus Game feature. Your reward here is 12 free spins. Any extra scatter will give you a further 3 free spins (i.e. 4 or 5 scatters will see you begin with 15 or 18 free spins respectively).

Boosting your winning chances is the arrival of the Wild Explosion feature. This comes into play on a free spin that doesn’t result in a winning combination being formed. The exploding wild blasts all the symbols from that row and column, new symbols avalanche in to replace them and a new payout consideration is made.

The exploding wilds triggers the Multiplier feature naturally. As already mentioned, it doesn’t revert to 1x following a winless avalanche. This means the multiplier can only increase. Finally, you can add extra free spins to your total too. Land 2 scatters and you’ll get another 3 free spins added to your total, with no limits.

The gameplay in the Crystal Quest: Frostlands slot is very similar to what you’ll find in other Crystal Quest slots, Crystal Quest: Arcane Tower and Crystal Quest: Deep Jungle. They also come with avalanches and multipliers as well as free spins. Each of them offers 1 feature that is unique. In Frostlands, it’s massive symbols.

As usual for a slot from Thunderkick, the design here impresses. There’s a decent amount of variety on offer from the gameplay thanks to the avalanche reels, massive symbols, multipliers, free spins and exploding wilds. It’s volatile too. With 15,000 x stake max wins, the bigger payouts will come from the multipliers. Especially in the free spins where it can only increase.

Put that together and you have a slot that’s easy on the senses, straightforward to play and packs a decent payout punch. That’s a pretty solid combination. Saying that, I would rather play Big Fin Bay (by Thunderkick) which comes with up to 117,649 ways to win, 15,040 x stake wins and different bonus features.

What is the Crystal Quest: Frostlands RTP?

The Crystal Quest: Frostlands return to player rate is 96.16% which is just above average. Highly volatile, the bigger wins will come from the various bonus features (5).

What is the Crystal Quest: Frostlands max win?

The maximum win here is 15,000 x your total stake from a single spin. You need the multiplier in the base game or free spins for the bigger wins.

Are there any Crystal Quest: Frostlands free spins?

Yes, the Bonus Game feature can potentially give unlimited free spins. Each avalanche sees the multiplier increase but doesn’t reset. Exploding wilds appear to blast symbols from the row and column to give new symbols and a new avalanche win (with increasing multiplier).

How does the Massive Symbols feature work?

Bar the scatter and wild, all symbols can trigger the Massive Symbols feature. They can appear in 2×2 and 3×3 formations. These massive symbols drop to the bottom of the reels and crush symbols below. 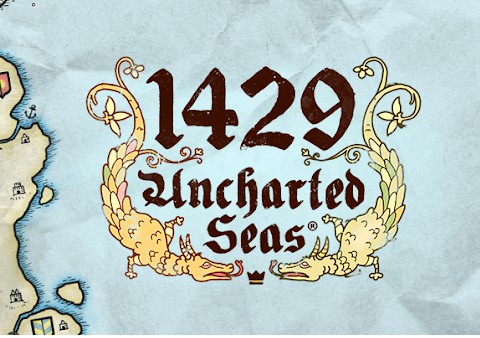 Christmas Megaways
We use cookies to provide you with the best experience. see our Find out more.