The Crystal Quest: Arcane Tower slot is the 2nd from the Crystal Quest series and is powered by Thunderkick. With 6 reels and 4,096 ways to win, you join adventurer Gemma on a quest for crystals. With up to 6 Linked Reels on every spin, each win gives you an avalanche which in turn increases the multiplier. In the Bonus Game feature, you can benefit from unlimited free spins and a multiplier that doesn’t reset. If you don’t get a win, all wilds explode to give you an avalanche and multiplier increase. It offers max wins of 15,000 x stake per spin. Find out more in our Crystal Quest: Arcane Tower review.

The Crystal Quest: Arcane Tower slot is played with 6 reels, 4 rows and 4,096 ways to win. You need to land 3 to 6 matching symbols on adjacent reels, in any position, beginning from reel 1 to get a winning combination. The only exception is the wizard as you only need 2 to form a win.

The stake levels are always the same with Thunderkick slots as you can play from 10p to £100 a spin. With a simple interface, you can adjust your bet level easily by clicking on the poker chip. There is also an Autoplay function where up 5,000 autospins can be chosen. The Autoplay can also stop when a feature is triggered.

The Crystal Quest: Arcane Tower RTP is 96.17% which is just above the average. With sky high variance, the bigger wins will come from the multipliers. The max win is 15,000 x your total stake per spin.

Theme – Audio and Design Features – enter a world of mystery 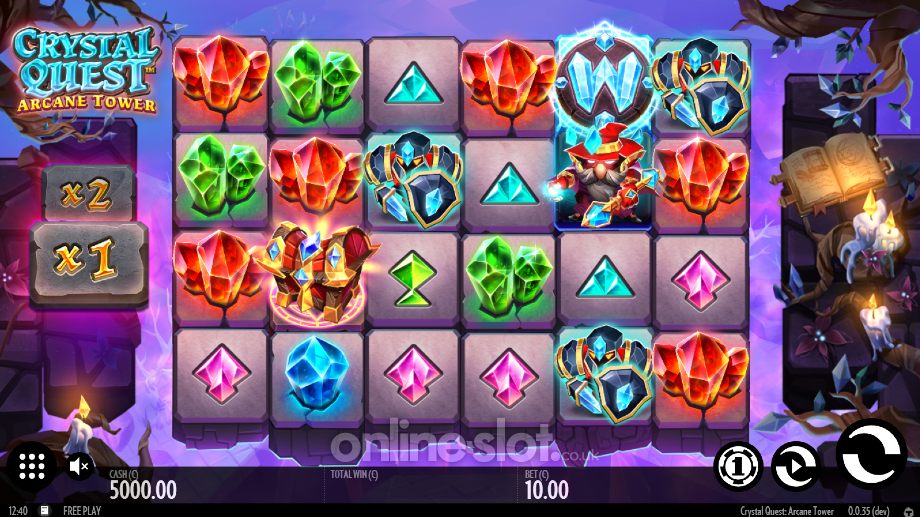 The Crystal Quest: Arcane Tower slot has a fantasy theme as brave voyager Gemma aims to reap the crystals from a mysterious tower. The graphics are high definition and colourful.

Symbols include 6 low value crystals. Then you have a crystal warrior and wizard. The wizard is the highest value symbol which pays 1, 2, 5, 10 or 20 x your total stake for 2, 3, 4, 5 or 6 in combination. There is also a W wild symbol which substitutes for all symbols bar the scatter.

As with all Thunderkick games, Crystal Quest: Arcane Tower can be played on mobile, desktop and tablet devices. The 6×4 reel layout lends itself better to bigger screens but it’s perfectly playable on smartphones too.

The Crystal Quest: Arcane Tower slot comes with a total of 5 bonus features. The main wrinkle are the Avalanches which brings multipliers into play. In the free spins, you can get consecutive wins and increasing multipliers which don’t reset. If you don’t a win and a wild is on the wild, you’ll get a wild explosion for an avalanche and multiplier increase.

When you get a winning combination, the Avalanche feature comes into play. Winning symbols are replaced with new symbols dropping from above. This gives you another opportunity to form a win. The avalanches continue as long as a new win is formed. The feature was made famous by Gonzo’s Quest (NetEnt). 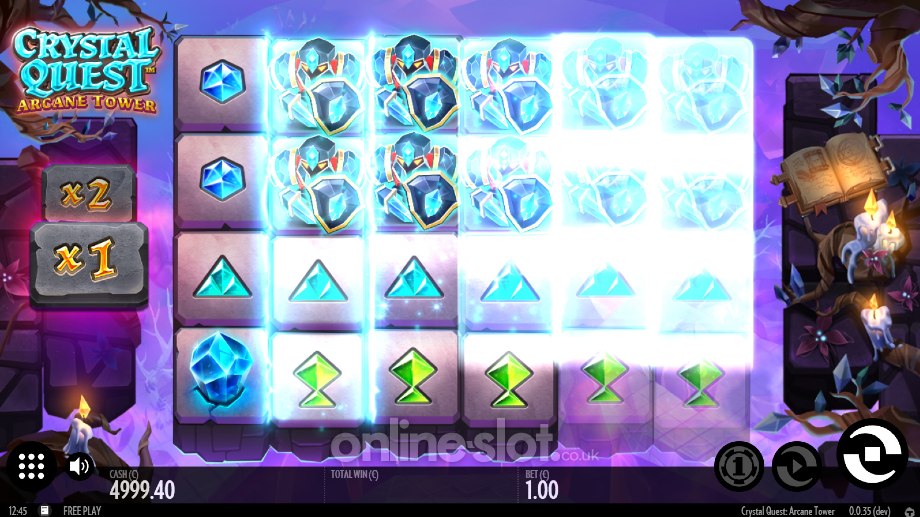 The Linked Reels feature sees up to 6 adjacent reels link together. The linked reels will become identical copies of each other displaying the same symbols. This feature cannot trigger, randomly, when the Avalanche feature is in motion. 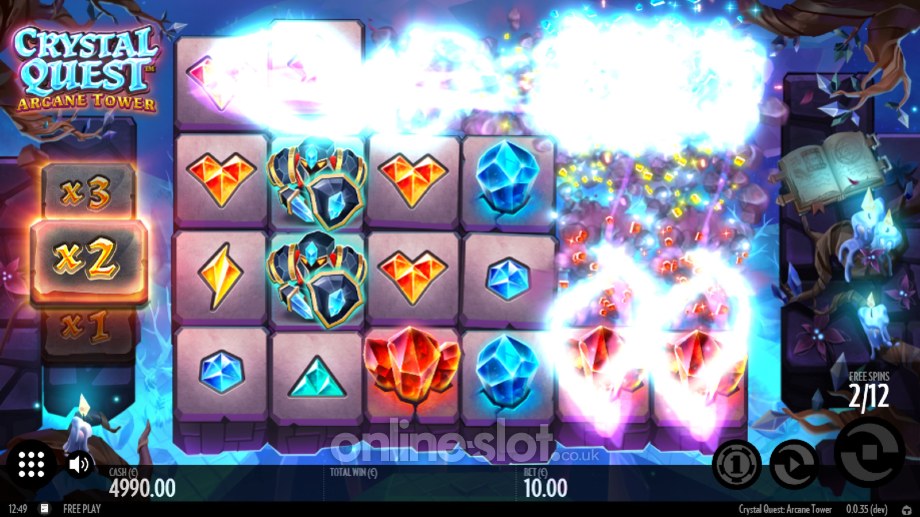 Finally, there’s a Wild Explosion feature. When no wins are created during the free spins and wilds appear on the reels, the reels containing wilds will explode and remove all symbols (bar the scatter) vertically and horizontally.

If you had a wild at the top of reel 1, the whole top row and reel 1 would explode and be replaced by new symbols. These explosions will trigger the Avalanche feature and increase the multiplier.

The Crystal Quest: Arcane Tower slot has 5 bonus features in total which may sound high but it’s all about avalanches and multipliers. The key to winning big is to get consecutive wins to increase the multiplier with no limits.

The bigger wins will come during the free spins as the multiplier can only increase, infinitely. This is quite a simple game in terms of features but offers good win potential if the multipliers work their magic.

The Crystal Quest: Deep Jungle slot (the first in the series) also has avalanches and multipliers as well as free spins with the same features. It even offers the same max win but a 0.03% lower RTP. Thunderkick has more or less copied the original game and changed the graphics.

I would much rather try other games of theirs such as Midas Golden Touch (Greek mythology) or Riders of the Storm which offers 26,426 x stake payouts.

What is the Crystal Quest: Arcane Tower RTP?

The Crystal Quest: Arcane Tower return to player rate is 96.17% which is slightly higher than the average. It’s a high variance game so don’t expect big wins often.

What is the Crystal Quest: Arcane Tower max win?

The top possible payout per spin is 15,000 x your total stake. The key to this is from the Multiplier feature which sees multipliers increase with each avalanche.

Is there a Crystal Quest: Arcane Tower free spins feature?

Yes, the Bonus Game feature can give you unlimited free spins. Every avalanche sees the multiplier increase which doesn’t reset following a winless spin. If you don’t get a win, the Wild Explosion feature kicks in to explode symbols vertically and horizontally to give you an avalanche and multiplier increase.

How does the Linked Reels feature work?

With the Linked Reels feature, up to 6 reels can randomly link together on a non-winning spin. This will give you identical symbols on up to 6 reels.