The Cosmic Voyager slot is a 5 reel, 10 payline game from Thunderkick. With a space theme, it comes with expanding symbols where all reels can contain matching symbols. This can lead to 5 reels of the same matching expanding symbol. This applies in the Bonus Game feature but it’s triggered much more easily as you only need 1 medium/high value symbol on reel 1. With an RTP of 96.14% and max wins of 2,500 x stake per spin, read our detailed Cosmic Voyager review.

Where to Play Cosmic Voyager Slot

The Cosmic Voyager slot is played on 5 reels, 3 rows and 10 fixed paylines. Winning combinations are formed by landing symbols in sequence from left to right beginning from reel 1. You need 3 or more low value matching symbols to get a win with just 2 or more with the higher value ones.

As with all Thunderkick slots, you can spin away from 10p to £100 per spin. Using a clean and crisp interface, adjusting your stake level is easy: just click on the poker chip. If you like, you can use the Autoplay facility where up to 5,000 autospins can be selected. The Autoplay stops when a bonus feature is activated.

The Cosmic Voyager RTP is 96.14% which is the norm for Thunderkick games. It’s just above the 96% average. Highly volatile, big wins will be hard to come by with most of them being small in nature. The top payout per spin is 2,500 x your total stake.

Theme – Audio and Design Features – head to a star-filled galaxy 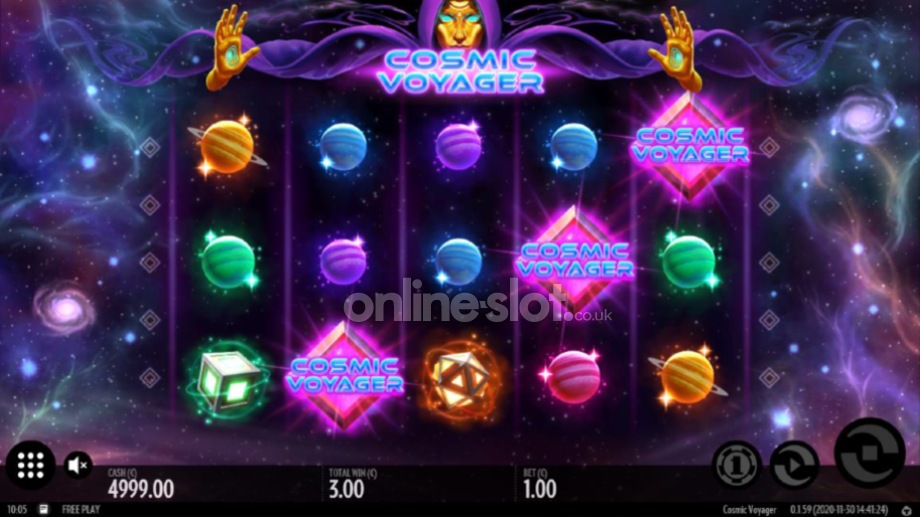 The Cosmic Voyager slot has a space theme and is set in a galaxy full of stars and planets. It does remind me a little of Starburst (from NetEnt). With a swirling galaxy providing the backdrop, it has an intense feel to the design. Overseeing proceedings is a mystical figure who sits above the reels.

Symbols on the reels include low value purple, blue, green, pink and orange planets. The medium value symbols are represented by an orange icosahedron, a green cube and blue pyramid. You also have a star and golden mask symbols. The golden mask is the highest paying symbol with 2, 3, 4 or 5 in combination paying 2, 10, 50 or 250 x your total stake.

The Cosmic Voyager logo symbol is both the scatter and the wild. It substitutes for all symbols in the base and game and main bonus feature.

Cosmic Voyager can be played on desktop, mobile and tablet devices. The simple 5×3 layout works perfectly on smartphones and the brightly coloured symbols display nicely on smaller screens.

The Cosmic Voyager slot comes with 2 bonus features. Central to the action are the expanding symbols which can lead to 5 reels full of the same symbol. In the free spins, you trigger the Expanding Symbols feature much more easily too.

The Expanding Symbols feature is triggered when 3 stacked symbols appear on the first reel. Any symbol that is the same as the stacked symbol on reel and is part of a winning combination is become an expanding symbol to take over it’s whole reel.

The only symbol that doesn’t expand is the Comic Voyager symbol. Here are the max payouts per symbol: 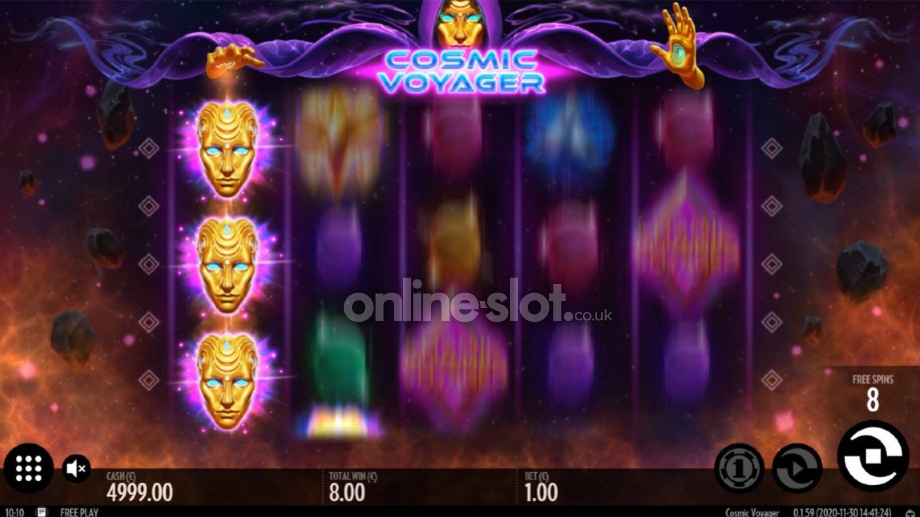 During the feature, 1 or more medium or high value symbols on reel 1 will expand and become 3 stacked symbols. As a result, this will then trigger the Expanding Symbols feature. The symbols that will incur this will be the blue pyramid, green cube, orange icosahedron, star and golden mask.

As opposed to the base game, just landing 1 symbol on reel 1 will bring the Expanding Symbols feature into play. This theoretically makes it more rewarding potentially. With a max win of 2,500 x stake per free spin, there’s a win cap of 5,000 x your total stake from the Bonus Game feature.

The Cosmic Voyager slot has a lot of similarities to the Starburst game. It shares the same theme and has expanding symbols. However, this game comes with free spins and much bigger potential payouts.

The key to winning big is to get matching expanding symbols on other reels. If you were to land the golden mask symbol fully on reel 1 as well as on any position on the 4 other reels, you would benefit from a screen full of golden masks. This would in turn lead to a 2,500 x stake payout.

If you compare to slots with expanding symbols like Book of Dead, Cosmic Voyager is more appealing as any symbol can become an expanding symbol on any spin or free spin. In ‘Book of’ slots, 1 symbol is chosen to expand during the feature. Getting a low value symbol limits your win potential in the free spins whereas this changes with each free spin in Cosmic Voyager.

Overall, Thunderkick has done a great job here. It’s well designed, has simple and familiar bonus features but has added a nice twist to what we’ve already seen. The game also has high win potential per spin.

What is the Cosmic Voyager RTP?

The Cosmic Voyager return to player rate is 96.14% which average for a Thunderkick slot. The variance is sky high though so expect smaller wins most of the time.

What is the Cosmic Voyager max win?

The maximum payout per spin is 2,500 x your total stake. This can be achieved by filling the reels with the highest value symbol, the golden mask.

How does the Expanding Symbols feature work?

The Expanding Symbols feature is triggered when you land 3 of the same symbol on reel 1. If matching symbols appear on other reels, they will expand. This can give you 5 reels with the same symbol.

Is there a Cosmic Voyager free spins feature?

Yes, the Bonus Game feature begins with 10 free spins and can give you unlimited retriggers. Any medium/high value symbol appearing on reel 1 will expand and trigger the Expanding Symbols feature. All matching symbols will also expand.