You might think that the Super Elephant slot would have a safari theme. Instead, it’s gemstones that take centre stage in this 5 reel, 10 payline, win both ways game from Skywind. Beautifully designed, the kaleidoscopic crystal elephant is the game’s wild. When these appear on the middle 3 reels they expand to fill that reel. You’ll then play a respin with that expanded wild locking in place.  Super Elephant also offers a shot at landing a progressive jackpot prize. Fill a payline with all 5 gemstone symbols and you’ll scoop the big one. Does it shine as brightly as its gemstone symbols? Find out in our detailed Super Elephant review.

Where to Play Super Elephant Slot

The Super Elephant slot is played using a 5 reel, 3 row, 10 payline win both ways machine. That means that you can start a winning combination from reel 5 as well as from reel 1.

To create a winner, you need to land 3, 4 or 5 matching symbols or wilds across a payline. If you land a 5-of-a-kind combination, the win is paid out twice thanks to the win both ways mechanic: once from left to right, then again from right to left.

Stake levels range from 10p to £300 per spin (the latter is high for the super high rollers of the world). To set your stake, use the + and – tabs next to the Total Bet box in the bottom left-hand corner of the screen.

The Super Elephant RTP is 96.1% which is about average as far a player return rates go. Considering it’s a jackpot slot game, it’s actually high. It’s a similar story with the variance. The volatility is in the medium range. On a scale of 1 to 5, we’d put the volatility at 3. Jackpots excluded, the max win is 600 x your total stake per spin. 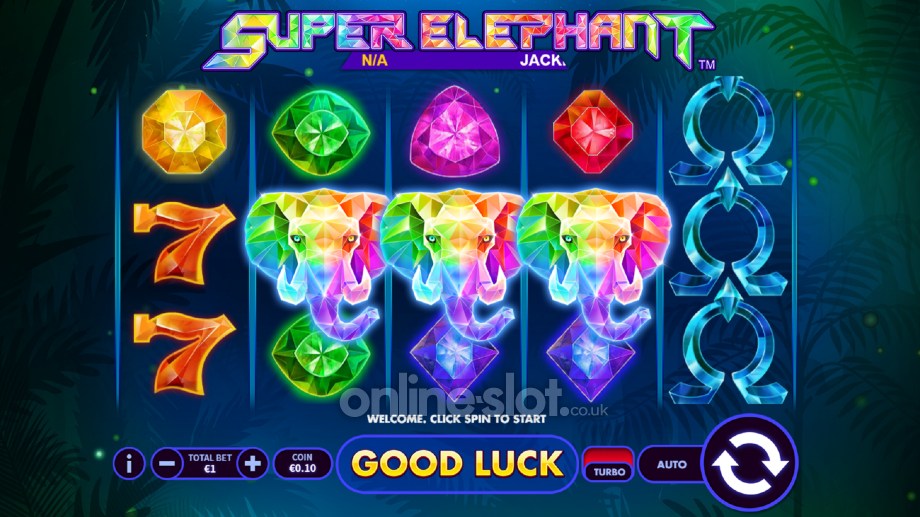 There’s a very clean and crisp feel to the design in the Super Elephant slot. With a jewel theme, there’s a hint of a forest at night in the background to the reels. Visually, it’s almost identical to the Super Lion slot (also by Skywind).

There’s a futuristic, ambient-style soundtrack playing in the background while you spin. This is a perfect match for the crisp visuals. Together, they work very well.

On those reels you’ll find 5 super sharp gemstones symbols which appear alongside an amber 7 and an Omega letter shape. This Greek letter is the most rewarding symbol, paying 5, 20 or 30 x your total stake if you land 3, 4 or 5 on a payline.

Central to most of the best action here is the rainbow elephant gemstone symbol which is the game’s wild. This substitutes for all symbols when it makes up part of a winning combination. It’s also instrumental to the game’s main feature offering, the Wild Respin feature, which we’ll look at in detail shortly.

The sharp imagery and simple gameplay make the Super Elephant mobile slot a very easy one to play. The design works perfectly if you’re using a device with a smaller screen like a tablet or smartphone. These mobile versions compare favourably with the standard desktop version of Super Elephant.

In the Super Elephant jackpot slot, the gameplay is straightforward. The range of extras here isn’t massive but there’s enough going on to keep things ticking over nicely. Central to the action are the sticky wild respins. The other feature highlight is a progressive jackpot prize. 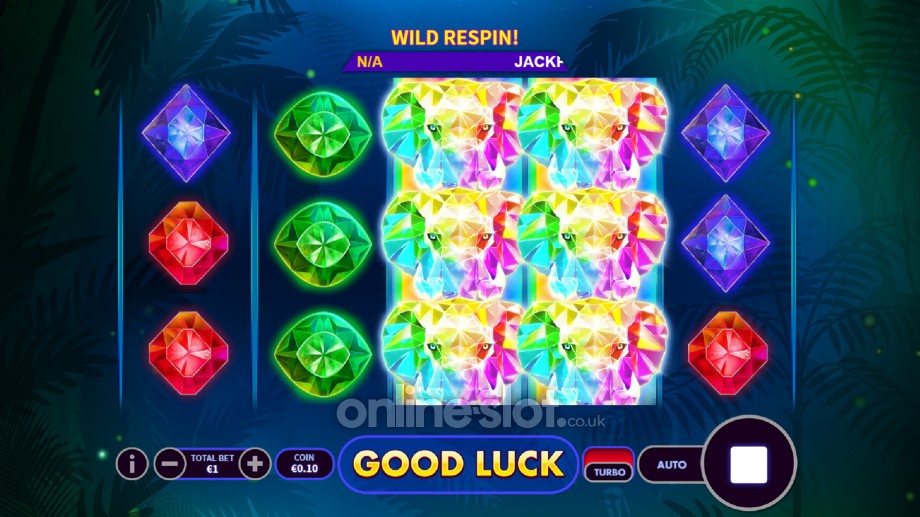 Hope to see the Super Elephant wild land in reels 2, 3 or 4. When this happens, the Wild Respin feature is activated. The Super Elephant expands to turn the whole of that reel wild. You’ll then go on to play a respin with the expand wild locked in place.

If you land another Super Elephant wild on that respin, it too locks in place and another respin follows, this time with 2 expanded wilds. The prefect scenario is to land a respin where the whole of reels 2, 3 and 4 are wild. Land a good combination of symbols on reels 1 and 5 and the coins can really fly. In case you’re wondering, it’s the same as the main feature in NetEnt’s Starburst.

You here also have a chance to land a bumper progressive jackpot prize. To trigger the Jackpot feature, you’ll need to land all 5 individual gemstone symbols across a payline. Simple. You can see the value of the jackpot in the ticker that scrolls across the screen above the reels. This won’t appear on the demo version above and only on the real money version though.

Skywind has kept things nice and simple with the Super Elephant slot. The gameplay revolves around the Wild Respins. As we’ve seen with classic slots like Starburst, this basic feature can be hugely popular.

Comparing to Starburst, the RTP is marginally higher (96.1% compared to 96.09%) but the max win is 600 x stake whereas it’s 500 x stake in the NetEnt favourite. There’s also the added element of the progressive jackpot. Overall, it’s a better slot game than Starburst.

The rather minimalist design works well here too. The imagery is neat and crisp and the ambient soundtrack is a perfect complement. If you like slots that are filled with features, this might be a little on the vanilla side for your tastes.

I didn’t find Super Elephant boring though. The Wild Respins come along regularly enough to keep things moving and there’s also the potential from the progressive jackpot. Put that together and you have a simple but playable slot from Skywind.

What is the Super Elephant RTP?

The Super Elephant return to player rate is 96.1% which is good for a jackpot slot game. The variance here is in the medium range. On a scale of 1 to 5, we’d put the Super Elephant volatility at about a 3.

What is the Super Elephant max win?

The most you can win per spin is 600 x your total stake. This is achieved by filled the reels with the highest value symbol. You also have the progressive jackpot which is unlimited.

What is the Wild Respin feature?

Land an elephant wild and you’ll play the Wild Respin feature. The wild expands to fill its reel. You’ll then get a respin with that wild reel in place. You could end up with a respin with the whole of the middle 3 reels wild.

Is Super Elephant a jackpot slot?

Yes, you can land a progressive jackpot prize in the Jackpot feature. To trigger the prize, you need to land all 5 gemstone symbols on a payline. You can check the value of the jackpot in the ticker above the reels.