Go toe to toe with the Big Apple’s meanest mobsters in the New York Gangs slot. This crime-themed game from Skywind is played using a 5 reel, 30 payline game engine and comes with a few notable extras. They include expanding wilds, the Russian Roulette pick me round and the Odd Man Out bonus which is another pick’em feature. Is this gangster extravaganza an offer you can’t refuse? Find out in our detailed New York Gangs review.

New York Gangs isn’t the most feature-filled slot you’ll play. There are a few extras to take into consideration though. Strangely, there aren’t any free spins.

The safe is the game’s wild symbol. As usual, this substitutes for everything apart from the bonus and scatter symbols when it forms part of a winning combination. Land the wild on reels 2 or 4 and it expands to turn the whole of the reel wild. 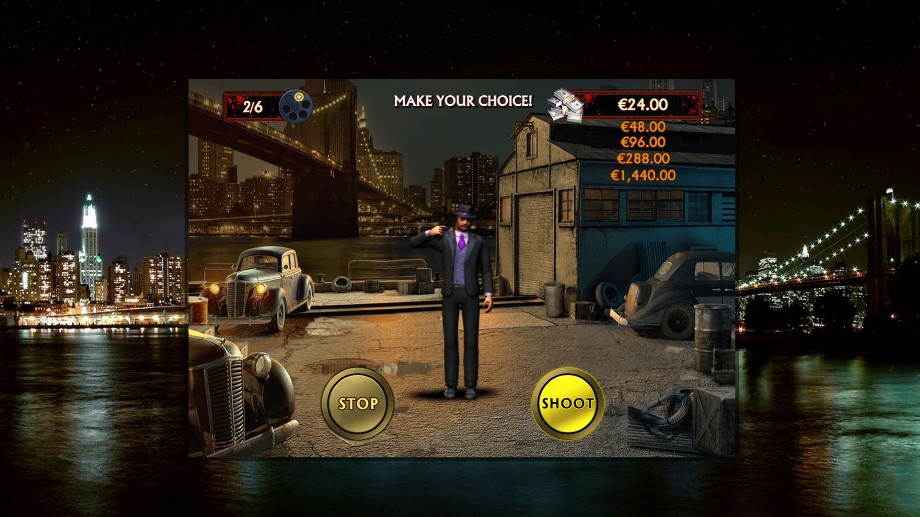 Land 3 or more bonus symbols (the pistol) in the same payline and you’ll trigger the game’s top feature, the Russian Roulette feature.

It’s a variation on the pick me round. The further you progress, the bigger the potential rewards. The riskier the game becomes though.

You’ll head to a new dockside setting where you’ll be confronted by a gangster. You’ll then get to play Russian Roulette by making a series of shots. If the shot is a blank, you’ll be offered the prize. You can then decide to collect the money or shoot again.

If you trigger this round with 4 or 5 bonus symbols, the prizes on offer are bigger than if you activated the round with 3 bonus symbols. It’s possible to win up to 120 times your total stake in this feature.

The second feature is activated by landing 3 of the briefcase bonus symbol on the same spin. Here, you’ll get to ambush a couple of mobsters and try and claim their loot. It’s another pick’em style bonus. Choose one of the gangsters to shoot and claim their prize.

This one isn’t as lucrative as the Russian Roulette though. Prizes here can reach 6.66 times your total stake. You can expect to land this feature more regularly though.

The set up in the New York Gangs slot is straightforward. The 5 reels and 3 rows combine to offer 30 paylines. A win is formed by getting 2 or more matching symbols across any of the 30 paylines.

Stakes range from between 30p and £300 per spin catering to all bankrolls. You can set autoplay by clicking on the Auto tab next to the spin button. This allows you to run 10, 25, 50 or 99 successive spins or an indefinite number until you trigger the feature.

The RTP of 94.96% is on the skinny side. On average, an online slot is about 96%. With its deadly theme, you might expect New York Gangs to be a high variance slot. It’s definitely not. In fact, the New York Gangs volatility is very low. The max win though is 3,000 x your total stake which can be achieved if you fill the reels with gold bullion symbols. 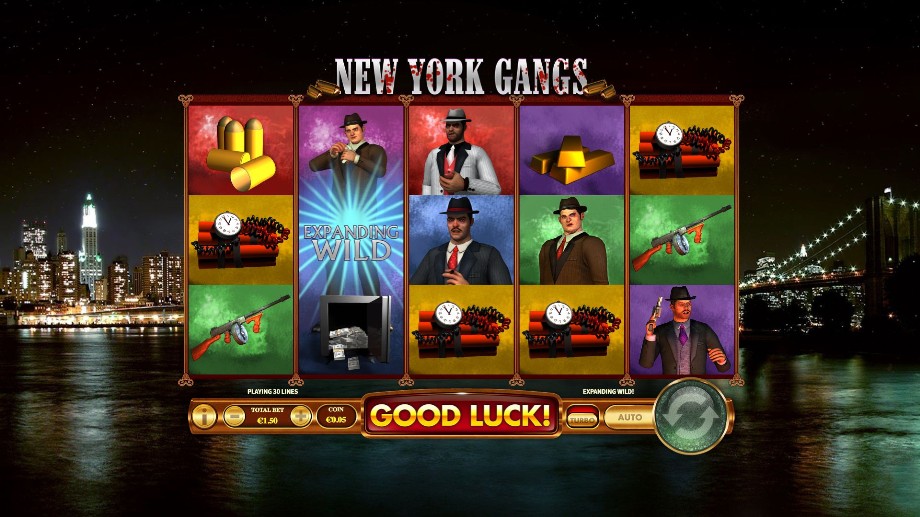 The look here is more the smart suits of The Godfather rather than the tracksuits and leisurewear of the modern-day Mafiosi. With the bright lights of the New York skyline at night in the background, the reels feature bullets, bombs, stacks of money and machine guns.

More rewarding is the quartet of gangsters. The most rewarding symbol is the stack of gold bars which pays 100 times your stake if you land 5 across a payline.

There’s a robotic look to these character symbols which is a bit weird. The imagery here isn’t of the greatest quality. The snappy soundtrack has a jazzy feel and is a good fit for the rather retro theme.

The game interface is very simple. Click on the i button to open the paytable. You can adjust stakes using the + and – buttons. There’s not really much else to do as far as settings go. You can play New York Gangs on desktop, mobile and tablet devices by the way.

The New York Gangs slot is a rather strange game. The gameplay is very simple and the variance is very low which is a surprise given the theme.

The Russian Roulette feature bonus can be well worth hitting though, the Odd Man Out less so. The lack of any free spins is something of a disappointment too. However, the max win is 3,000 x your stake from the high value symbol is appealing.

Visually, it’s not stunning but the soundtrack creates plenty of atmosphere. Overall, then it’s a very mixed picture for New York Gangs. This slot isn’t an offer we can’t refuse. It’s decent enough but not something we’ll be rushing back to play. Other Skywind slots like Olympic Cash and The Last Kingdom are better.

? Can I play New York Gangs on my mobile?

Yes. Skywind produces all slots using HTML5 technology meaning New York Gangs can be played on mobile, tablet and desktop devices. You can also try the slot for free right here at Online-Slot.co.uk. You will need to verify your age if you’re from the UK – the process takes under 1 minute and is required just once.

⭐ What is the New York Gangs slot RTP?

❓ What are the New York Gangs bonus features?

The top feature is the Russian Roulette feature. Here, you get to play a game of virtual Russian Roulette. Each blank shot increases the potential prize. If you find the chamber with the bullet though, you’ll end up losing the whole of the prize pool for the round. There’s another pick me round too. Finally, there are expanding wilds on reels 2 and 4.

? What is the New York Gangs slot max win?

In the 2 pick me features, you can win 6.66 x stake (Odd Man Out feature) and 120 x stake (Russian Roulette feature). In the base game though, a screen full of the highest value symbol will result in a 3,000 times stake payout . To help you, you can benefit from 2 fully wild reels.