A beautiful Chinese garden is the setting for the Dragon Gong slot, a simple Asian-themed game from Skywind. Central to the action in this 5 reel, 10 payline slot are the special secret symbols that trigger the Mystery Gong feature. All of these symbols transform into the same matching symbol. These can land in blocks of up to 9 symbols.  Look out for the dragon that can fly across the screen when the Mystery Gong feature is active and upgrade the value of the transformed symbols. Find out all you need to know about this straightforward release in our detailed Dragon Gong review.

Where to Play Dragon Gong Slot

Like pretty much everything as far as the gameplay in the Dragon Gong slot is concerned, the set up is very simple. The action plays out on a 5 reel, 3 row, 10 payline machine. To create a winning combination, you’ll need to land 3, 4 or 5 of the same symbol on a payline, starting from reel 1.

Stake levels here range from between £1 and £300 per spin. Use the + and – buttons in the bottom left-hand corner of the screen to adjust. The curled arrow next to the green spin button allows you to activate autoplay. You can run 10, 25, 50 or 99 autospins if required. Click on the dial button to left of that if you want to quicken the pace and bring turbo spin mode into play. 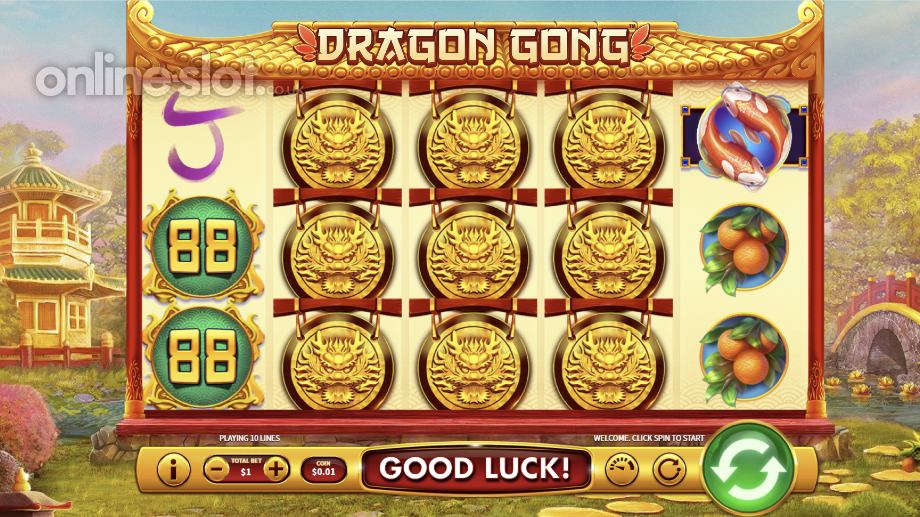 There’s a very traditional Chinese feel to the design in the Dragon Gong slot. A classical Asian garden is the setting. You’ll see plenty of flowers and greenery in the background as well as a pagoda-style building and a small footbridge. It’s all rather charming.

The visuals are complemented by an equally traditional, classical style soundtrack. You could only be in Asia with a slot with this combination of sound and visuals. It’s all very nicely done.

The plain, yellowish reels are edged in a red and gold frame. There, you’ll find A to 10 royals alongside a pink flower, oranges and a pair of koi carp. The most rewarding symbol is the 88, a figure considered lucky in Chinese culture. Land 3, 4 or 5 of this symbol on a payline for a payout of 2, 3 or 8.8 x your total stake.

You can play Dragon Gong on all devices including desktop, tablet and mobile. The gameplay is very straightforward regardless of what you’re playing on. The design in the Dragon Gong mobile slot works very nicely though.

This virtual Chinese trip is a very simple one. The Dragon Gong slot isn’t exactly overloaded with extras. You won’t find free spins or pick me prizes here. The Mystery Gong can cause quite the stir though, especially if boosted by the dragon.

The key success in Dragon Gong are the mystery symbols. These are gong symbols adorned with the face of a snarling dragon. These are special mystery symbols. All examples of this symbol that appear on the same spin transform into the same symbol. A new payout calculation is then made with the newly transformed symbols in position.

Keep a special eye out for the colossal 3×3 block of mystery symbols. If at least 1/3 of this block lands, it becomes active. If the full block appears, you’ll see 9 symbols all transform into the same one which can lead to some big combinations.

On any spin where the mystery symbols are active, you could see an animated dragon fly across the screen. This changes the value of the symbols that have been transformed. An upgrade here can turn a decent cluster into an impressive one.

If you’re after a game that delivers plenty of fireworks in terms of bonuses and features, you might be a little underwhelmed by what the Dragon Gong slot has to offer. The gameplay is very straightforward. There’s not even a wild here, let alone free spins.

That rather basic offering will no doubt be rather too vanilla for some tastes. Especially as Dragon Gong isn’t a high variance slot. Sometimes a little tranquillity is no bad thing and with its rather lovely sound and visuals, Dragon Gong matches that description.

It’s certainly not the liveliest slot you’ll come across and it’s not something I’ll be rushing back to play. If you like the Asian theme and fancy trying something relatively gentle, Dragon Gong should fit the bill.

Skywind has produced much better slot games with the Magic of Oz slot recommended. Another option is the Full Moon Madness slot which offers decent wins and free spins with stacked symbols/wilds.

What is the Dragon Gong RTP?

The Dragon Gong return to player rate is 95.26% which is low compared to the 96% average. Low to medium variance, this is a game for players who want simple action.

What is the Dragon Gong max win?

The most you can win playing Dragon is 88 x your total stake per spin. This is achieved by filling the reels with the high value 88 symbol.

What is the Mystery Gong feature?

There’s a Mystery Gong feature where mystery symbols transform into 1 paying symbol for a better chance of forming a winning combination.

How does the Dragon Power feature work?

When mystery symbols are present, the dragon can fly across the screen and trigger the Dragon Power feature. The value of the symbols that have been transformed can be upgraded for bigger payouts.