Take the well-trodden path to the land of the Pharaohs in the Book of Gems Megaways slot. Created by Skywind, this ancient Egyptian adventure is played on a 5 reel machine where the number of ways to win can reach 3,125. The main bonus is the Free Spins feature which is triggered by landing 3 wilds on the middle 3 reels on the same spin.  You’ll then play free spins with a special expanding symbol which fills the reel whenever it lands if the expansion leads to the creation of a winning combination.  Find out more about this super volatile slot in our full Book of Gems Megaways review.

Where to Play Book of Gems Megaways Slot

Most Megaways games are played using a 6 reel machine. It’s unusual to see a 5-reel Megaways slot but that’s exactly what you’ll find in the Book of Gems Megaways slot. That reel change aside, the mechanic plays just as you’d expect it too. The number of symbols per reel changes randomly with each spin.

To create a winning combination in Book of Gems Megaways, you need to land 3 or more matching symbols or wilds on adjoining reels, starting from reel 1. Stake levels range from 50p to £250 per spin. Adjust using the + and – buttons in the bottom right-hand corner of the screen. Click on the autoplay button and the autospins continue indefinitely. You can’t set specific number here. Just click on the autoplay button again to stop the autospins.

The Book of Gems Megaways RTP is 95% which is a little on the low side. What isn’t low is the volatility. This is a high variance slot. We’re talking full on 5 out of 5 when it comes to volatility.  The max win per spin is 12,500 x your total stake.

Theme – Audio & Design Features – journey to the pyramids of Egypt 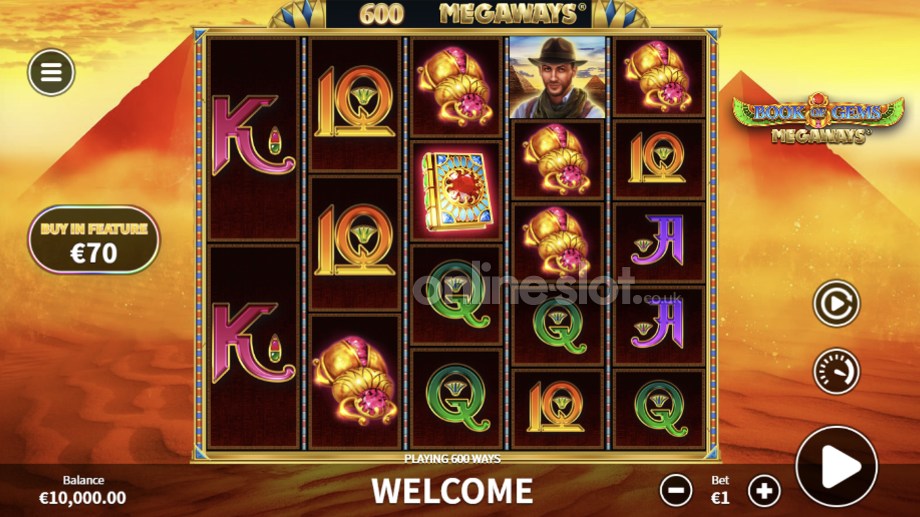 The design in Book of Gems Megaways is typical of an ancient Egyptian-themed slot. The reels are set against a sun-kissed Sahara backdrop that’s dominated by pyramids. There’s a haunting, Arabian-style soundtrack playing while you spin, which is an ideal fit and ramps up the atmosphere.

Visually, it will remind you of the Book of Ra slot by Novomatic. The visuals aren’t overly flashy but everything is clear and easy to make out.

On the reels, you’ll find A to 10 royals alongside a ring embossed with the eye of Ra, a scarab beetle and gem-encrusted gold pyramid. The Indiana Jones-style adventurer is the most rewarding symbol. This pays 0.8, 2.5 or 4 x your total stake if you land 3, 4 or 5 in combination. He does look quite a lot like actor Tom Hardy.

In Book of Gems Megaways, the range of features isn’t massive. There’s still the potential for some pretty fiery action though, courtesy of the Megaways mechanic and the free spins feature where your winning chances are boosted by expanding symbols. 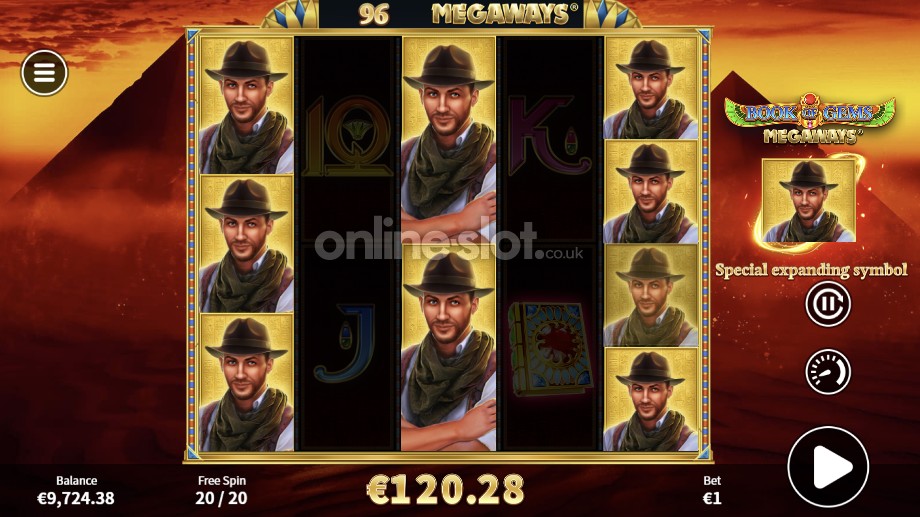 To trigger the game’s Free Games feature, you’ll need to land 3 Book of Gems wild symbols on reels 2, 3 and 4 on the same spin. Your reward is a payout of 2 x your total stake as well as 10 free spins.

Before the feature starts, the pages of the Book of Gems will open. The symbol on which the page opens will be the special symbol. This special symbol expands to fill the whole of the reel if the expansion leads to the creation of a winning combination.

More importantly, the expanding symbols don’t have to be on adjoining reels to create a successful combo either. For example, if you landed the special symbol on reels 1, 3 and 5 on the same free spin, you’d still end up with a winner and a payout.

Landing 3 Book of Gems wild symbols on the same free spins delivers a retrigger. Another 10 free spins are added to your total. The same expanding symbols is active. You can win an unlimited number of extra free spins.

In some territories (not the UK unfortunately), you’ll have the opportunity to buy your way into the Free Games feature. Known as the Buy In feature, This will set you back 70 x your total stake. If applicable, click on the ‘BUY IN FEATURE’ button to the left of the reels.

The Book of Gems Megaways slot isn’t the most original game you’ll play. It combines a simple Megaways engine with a ‘Book of’ mechanic. For this reason, this game will appeal to many players. The design has a classic land based slot look which also ties in nicely with the ‘Book of’ feel.

I’ve seen plenty of slots with an ancient Egyptian setting that comes with free spins with an expanding symbol. The slight wrinkle here is the Megaways game mechanic. The key to winning big is to get a high value expanding symbol in the free spins. A screen full of the highest value adventurer symbol on 3,125 Megaways will give 12,500 x your total stake (3,125 Megaways x 4x stake).

It’s all solid enough but didn’t really get my pulse racing. If you enjoy the ancient theme or super volatile gameplay, Book of Gems Megaways is a game to consider. Skywind have been clever in using the popular expanding symbols concept in the free spins alongside the Megaways engine. Let’s hope they area bit more adventurous in future Megaways releases.

Alternatively, you can play Legacy of Ra Megaways from Blueprint Gaming which has more bonus features and offers 50,000 x stake wins on each spin.

What is the Book of Gems Megaways RTP?

The Book of Gems Megaways return to player rate is 95% which is a little on the low side. Most slot games these days average out at 96%. The variance though is very high (5/5).

What is the Book of Gems Megaways max win?

The max win per spin is 12,500 x your total stake. This can be achieved by filling the reels with the high value adventurer symbol and getting 3,125 Megaways or ways to win.

Are there any Book of Gems Megaways free spins?

Yes. The Free Games feature begins with 10 free spins. They come with a special expanding symbol which fills the reel when it hits. These symbols don’t have to be on adjacent reels either. You can also win unlimited extra free spins.

Is there a Book of Gems Megaways mobile slot?

Yes, you can play on iOS, Android and Windows powered smartphone devices. Available to play on tablet and desktop devices too, you can play Book of Gems Megaways free here at Online-Slot.co.uk.