It’s all aboard the Money Train 2 slot for a second shot at landing a massive Wild West payday. Created by Relax Gaming, it’s is a 5 reel, 40 payline game that comes with a couple of explosive extras. Land 2 bonus symbols to trigger the Respin feature. These symbols reveal multipliers which are added together. The reels keep spinning until you land a winner with the multipliers rising by 1 with each respin. In our detailed Money Train 2 review, you’ll also find out about the Money Cart Bonus feature. This is a streak respin round. As well as standard cash values, look out for members of the gang who can deliver special extras. There’s 50,000 x stake wins, in total.

The Money Train 2 slot is played with 5 reels, 4 rows and 40 paylines. Wins are awarded by landing 3, 4 or 5 matching symbols consecutively on a payline, starting from reel 1.

Stake levels range from between 10p and £20 per spin. Use the + and – symbols below the reels to adjust your bet accordingly. In some countries, you can set between 10 and 1,000 autospins or leave them running indefinitely. There are also options for win and loss stop limits.

The Money Train 2 RTP is 96.4% which is slightly above average. If you use the Buy feature, the RTP increases to 98%. Wins will come by every 5 spins or so on average as the hit frequency rate is 19.55%. Very high variance, the maximum win is 50,000 x your total stake which will come in the Money Cart Bonus feature. 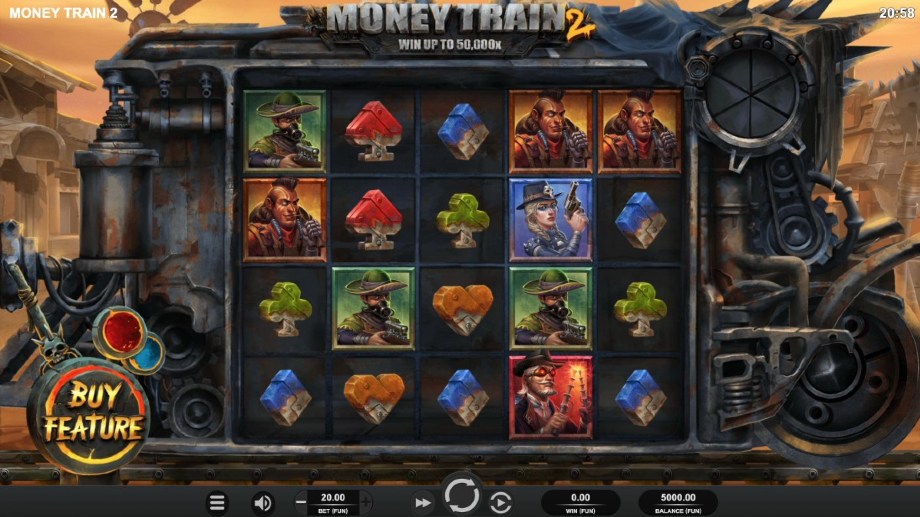 The design in the Money Train 2 slot is excellent. There’s a slightly steampunk feel to the Wild West visuals. The setting is a dusty, rather ramshackle desert town that reminded us of Mad Max.

The imagery here is excellent, backed by a stirring soundtrack that has just the hint of country about it. It all works very well. It’s gritty and grimy but creates the atmosphere of a futuristic, frontier town. The reels are set within the Money Train.

There, you’ll find diamond, heart, club and spade symbols alongside the Collector, the Payer, the Sniper and the Necromancer. The Necromancer is the highest paying symbol. Land 3, 4 or 5 of the latter in combination for an award of 0.8, 4 or 20 x your total stake.

The skull is the wild. This replaces everything bar the Bonus and delivers the same payouts as the Necromancer (up to 20 x stake per payline). Here’s a table showcasing all symbol payouts:

The excellent design is evident in all versions, including the Money Train 2 mobile slot. You can of course play on tablet and desktop devices. For the optimal experience, play on a laptop or PC device.

The gameplay in Money Train 2 is a little unusual. The features aren’t the common or garden variety but they can certainly deliver a knockout payout punch. That’s certainly the case with the Money Cart Bonus feature. We’ll start with the Respin feature.

The Respin feature triggers every time you land 2 bonus symbols anywhere on the reels on the same spin. Those 2 bonus symbols will both reveal multipliers which are added together.

A respin then follows. These respins keep on coming until a winning combination is created. Each successive respin without a win increases a multiplier by 1x. When you do land a winner, the payout is boosted by whatever multiplier you have managed to build.

The Money Cart Bonus feature is triggered by landing 3 or more bonus symbols on the same spin. The triggering Bonus symbols will then reveal a multiplier value of between 1 and 10x your total stake. Those symbols are held and 3 respins follows.

If a new Bonus symbol lands, it too reveals a multiplier amount and the respins reset to 3. Special gold bonus symbols can deliver prizes of between 20 and 200 x stake. There are also special character symbols that can really boost your winning chances:

Furthermore, filling a reel with symbol will see an extra reel opened. This can happen 2 times for 2 extra reels and bigger wins potentially.

Money Train 2 comes with a Buy feature. You can simply buy your way into the Money Collect Bonus feature for 100 x your total stake. Unfortunately, this option isn’t available in the United Kingdom.

The original Money Train was a huge hit with players due to its high volatility and big win potential. The Money Train 2 UK slot takes the concept to a whole new level as the potential payouts are much bigger (50,000 x stake vs 20,000 x stake per spin).

With all the potential modifiers in the Money Cart Bonus feature, the Money Train 2 slot sounds rather complicated. It’s really not. The feature is actually a straightforward streak respin feature. It can deliver some good action though, especially if the gang work their magic and the persistent symbols deliver multiple payouts.

I liked this slot sequel. Relax Gaming has also delivered in what a sequel should entail: better graphics, more features and bigger potential wins. It still retains all the elements that made the original a hit though.

Combining high class sound and visuals with cracking features, I’m happy enough to climb aboard the Money Train 2. If you want more Wild West action, Dead or Alive 2 by NetEnt is worth playing and offers even bigger potential wins.

Another option is Nolimit City’s Fire in the Hole. It comes with a Lucky Wagon Spins feature which is similar to the Money Cart Bonus feature. The game also offers slightly bigger max wins of 60,000 x stake.

What is the Money Train 2 RTP?

The Money Train 2 return to player rate is 96.4%. That’s slightly above average. Being a highly volatile slot, the win potential is much more impressive.

What is the Money Train 2 max win?

The maximum win is 50,000 x stake. This will come in the Money Cart Bonus feature where prizes can build up due to the presence of characters who add modifiers into the mix.

What is the Money Cart Bonus feature?

The Money Cart Bonus feature is a variation on the streak respin bonus. Each bonus symbol that lands awards a multiplier prize. Look out for the 4 character symbols who can bring extra modifiers into play. Persistent symbols can also deliver multiple payouts.

Is there a Money Train 2 demo?

Yes, the Money Train 2 free play version is available here at Online-Slot.co.uk. You can play the game on desktop, mobile or tablet devices as desired.

Where can I play Money Train 2?

You can play the Money Train 2 real money version at a variety of online casinos and slot sites that stock games from the Relax Gaming catalogue. Check out the best slot sites to play Money Train 2.