Relax Gaming has taken a classic Irish fortune-themed slot and brought it bang up to date with a fresh new game mechanic in the Emerald’s Infinity Reels slot. The action starts on a 3-reel machine. Land 3 matching symbols across those 3 reels and a re-spin is awarded with new reel is added. These expansions continue as long as a new matching symbol lands. Look out too for 2x symbols which provide a multiplier boost as well as bonus symbols which trigger a Free Spins feature that awards 12 free spins. See what else the lucky leprechaun has in store in our in-depth Emerald’s Infinity Reels review.

Each spin in the Emerald’s Infinity Reels slot starts on a 3 reel, 4 row machine. If you land a matching symbol on all 3 reels, you’ll receive a re-spin. The reels shift to the left and a 4th reel is then added. If you land another matching symbol, the process is repeated. These expansions keep on coming as long as a new matching symbol (or 2x or bonus symbol) appear.

You can play Emerald’s Infinity Reels at stake levels of between 20p and £50 per spin. Use the + and – tabs below the reels to adjust or head into the settings and then click on what level you’re comfortable with. The arrows icon next to the spin button activates autoplay. Here, you’ll have the option to set between 10 and 1,000 autospins or leave them running indefinitely. You can adjust win and loss stop limits here too.

The Emerald’s Infinity Reels RTP is 96.3% which is slightly better than average. Medium to high variance, the max win per spin is still not yet known. 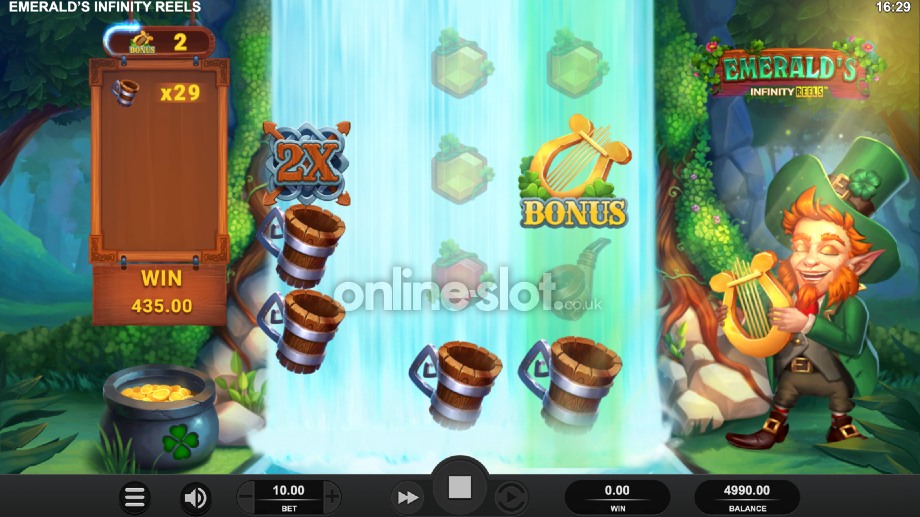 The design in Emerald’s Infinity Reels is rather nicely done. With an Irish luck theme, a rather magical looking woodland forms the backdrop to the reels.

There’s a rather gentle, harp-heavy soundtrack playing while you spin. It’s a lot more laid back than many slots that star anarchic leprechauns. Overall, the design in is tastefully done.

There are just 6 standard symbols. You’ll see green, yellow and red gems alongside a pipe, a tankard and a typically jolly leprechaun. The leprechaun is the highest value symbol giving you 3 x your total stake for 3 in combination.

There’s also a harp which is the Bonus symbol and a 2x symbol which doubles the amount of symbols collected and is effectively a multiplier.

You can join the lucky leprechaun on all devices including desktops, tablets and smartphones. The Infinity Reels game mechanic works just fine on a mobile, especially if you’re playing in landscape mode.

The Infinity Reels game engine is the central plank of this Irish fortune-themed slot. With 2 bonus features, you can benefit from 2x multipliers in the Lucky Re-Spin feature as well as a Free Spins feature that awards a minimum of 12 free spins.

Every winning combination triggers the Lucky Re-Spin feature. When this happens, reels shift left and the matching symbol from reel 1 is collect with the right-most reel re-spinning. The re-spins continue as long as a matched symbol, a 2x symbol multiplier or bonus symbol appear in the re-spin.

If you land a 2x symbol, it doubles the number of symbols collected up to that point. For example, if you had 4 matching symbols on adjoining reels and landed the 2x symbol, the payout would be the equivalent of 8 symbols. When there’s a respin where no new matching, 2x or bonus symbols land, the reels reset to their original 3 reel, 4 row formation. 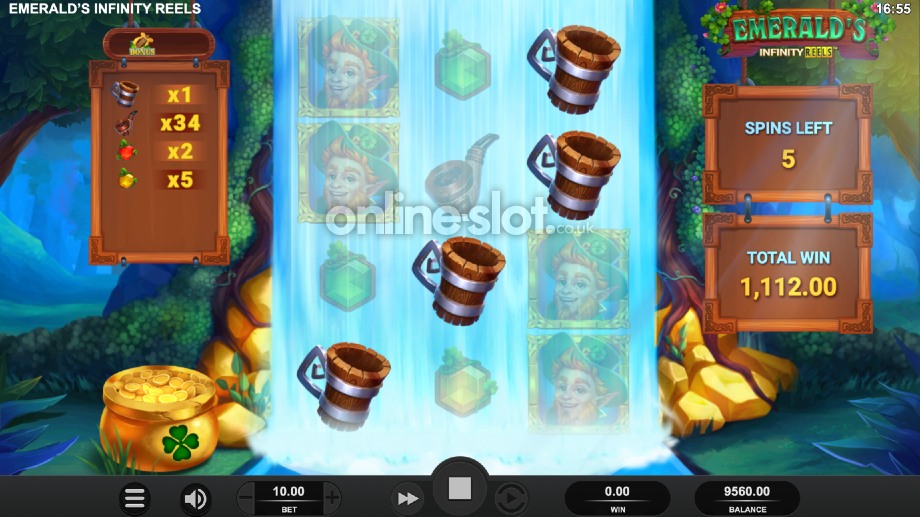 Winning symbols are collected throughout the whole of the feature, not just on a single free spin. This means that it’s possible to collect the same symbol multiple times which can certainly boost your winning potential.

The special 2x symbol doubles the number of all types of symbols collected in the round, up to the moment it appears. Retriggers are possible too. Collecting 3 Bonus symbols during a sequence of re-spins will add another 12 free spins to your total. This can lead to unlimited free spins.

Relax Gaming has taken ReelPlay’s innovative mechanic and put it to good effect in the Emerald’s Infinity Reels slot. The Infinity Reels can take a little getting used to if you’ve not played one of these slots before so we recommend having a go in demo mode if you get the chance.

The action can be a little on the repetitive side but if you get on a good run of winning re-spins then look out. That’s certainly the case if the 2x symbols help move things along. The design is rather tasteful for a slot with this theme too.

If you compare to Giza Infinity Reels (from ReelPlay) for example, this game has less bonus features and no multiplier. Relax Gaming has also uses various mechanic in their other slots and Kluster Krystals Megaclusters is their best to date.

What is the Emerald’s Infinity Reels RTP?

The Emerald’s Infinity Reels return to player rate is 96.3% which is slightly better than average. Most wins will come from the re-spins and free spins.

What is the Emerald’s Infinity Reels max win?

The biggest possible win per spin is still unknown. This section will be updated once this information is made available to us.

What are Infinity Reels?

Landing matching symbols on all 3 reels and you’ll trigger a re-spin where a 4th reel is added. The re-spins and extra reels continue as long as a new matching symbol, 2x or bonus appear. This can lead to infinite reels.

Are there any Emerald’s Infinity Reels free spins?

Yes, trigger the Free Spins feature and begin with a minimum of 12 free spins. Symbols are collected throughout the feature, rather than just in a single re-spin which can boost your winning chances.