Join the son of Odin, defender of Asgard and Norse God of Thunder in the Thor Infinity Reels slot. Created by ReelPlay, it uses the Infinity Reels game mechanic. Land a winning combination and an extra reel is added which also brings a multiplier into play. Add 12 or more reels and you’ll scoop the Infinity Bonus worth 888 x stake. The other highlight of this highly volatile slot is the Jackpot Respins feature where you could land a jackpot of between 10 and 2,000 x your total stake. Find out more about this superbly designed Scandi saga in our full Thor Infinity Reels review.

Each spin in the Thor Infinity Reels slot starts on a 3 reel, 4 row machine. Land a winner by hitting the same matching symbol on reels 1, 2 or 3. When that happens, those symbols are locked in place and a 4th reel is added to the right of the original set.

If a new matching symbol is added on that 4th reel it too locks and another new reel is added. This process continues until you land a spin that doesn’t improve your winning combination.

Stakes here range from between 20p and £40 per spin. Click on the coins in the settings section then choose your level. Autoplay lets you run 10, 25, 50 or 100 autospins.

The Thor Infinity Reels RTP is 96.2%. Expect to land a winning combination every 3.64 spins. The volatility here is high with the bigger wins coming from the increasing multipliers and the various bonus features. The maximum win from a single spin is 6,055 x your total stake. 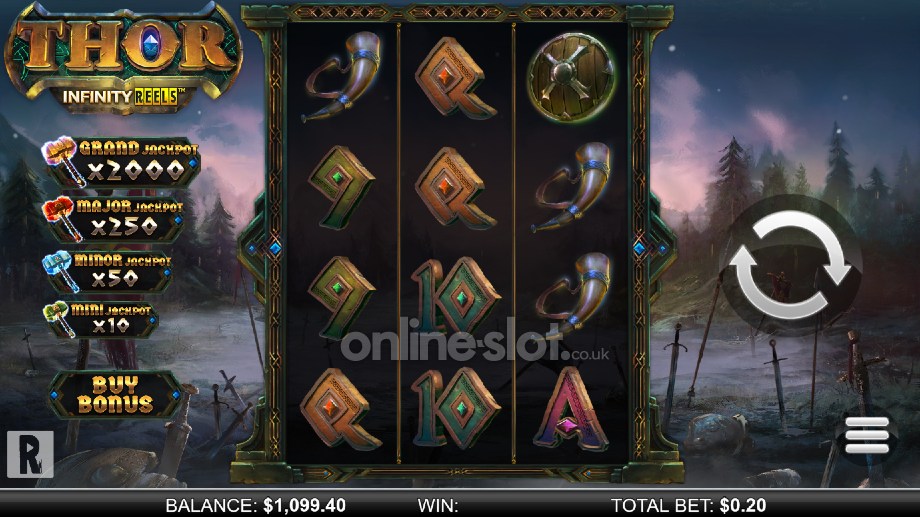 The Thor Infinity Reels slot has a Norse mythology theme. Its based on Thor, who is the son of Odin, defender of Asgard and the God of Thunder. A game with an epic theme deserves design to match and ReelPlay has delivered just that which looks and sounds superb.

The imagery is beautifully drawn and packed full of detail. A soaring, operatic soundtrack plays while you spin and it’s a perfect fit for this Norse myth theme. The design here is terrific.

The remnants of a forest battleground form the backdrop to the reels here. You’ll see Norse-style A to 9 royal symbols alongside a horn, a wooden shield and Viking-style helmet. The most rewarding symbol is the pair of axes which awards 5 x stake if you land 3 on adjoining reels. Thor is the game’s wild symbol. He substitutes for everything apart from the hammer scatter.

That high class design is evident whether you’re playing on a desktop, tablet or mobile device. The gameplay stacks up pretty well on the mobile versions too.

The action in this Norse epic revolves around the Infinity Reels game mechanic. This adds extra reels as well as bringing expanding multipliers into play. You could land a big bonus here. You’ll also have a shot at landing 1 of 4 potential jackpot prizes. 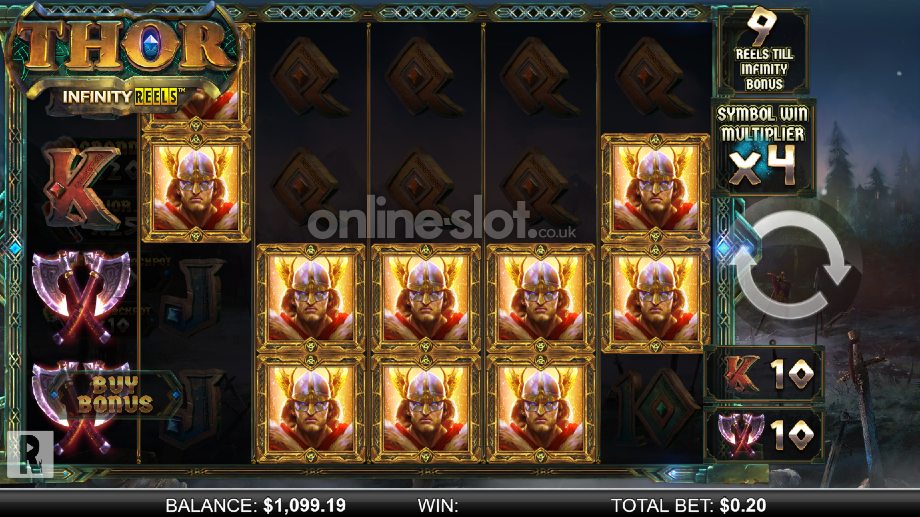 The base game action starts with a standard 1x multiplier active. That multiplier increases by 1 with each extra reel that is added. This is called the Symbol Multiplier feature.

If you get on an epic winning run and manage to add 12 reels, you’ll be in line for the Infinity Bonus feature. This delivers a bumper payout of 888 x your total stake. The multiplier doesn’t apply to this Bonus prize. 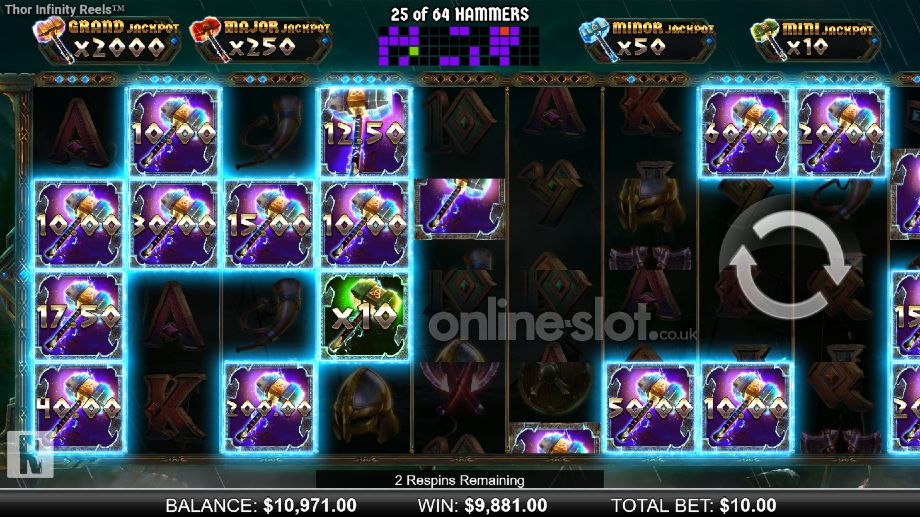 The Jackpot Respins feature triggers by landing 6 or more hammer symbols anywhere on the reels on the same spin. The triggering hammers are held and 3 respins are awarded on reels made up solely of blanks and hammers. If a new hammer lands, it locks in position and the number of respins resets to 3. If you fill a whole reel, a new reel is added to the right.

In some territories, you’ll have the option to buy the Jackpot Respins feature via the Buy Bonus feature. This will cost you 100 x your total stake. This option is not available in the UK though.

The Thor Infinity Reels slot is impressively done. The range of extras isn’t massive but the Infinity Reels and the multipliers that come with them keep things rolling along at a decent pace.

The Jackpot Respins is a classic streak respin round that can deliver some top action. It’s similar to the action from the Money Cart Bonus feature in Money Train 2 can lead to an extra 2 reels. The only downside is that there are no free spins.

Combine that gameplay with the classy sound and visuals and in Thor Infinity Reels, you have a very playable, and very volatile slot. However, Odin Infinity Reels Megaways (also by ReelPlay) offers a similar theme, also incorporates Megaways and free spins as well as a max payout of 20,000 x stake per spin.

What is the Thor Infinity Reels RTP?

The Thor Infinity Reels RTP is 96.2% which is a just above the standard. High variance, expect to land a winning combination every 3.64 spins on average.

What is the Thor Infinity Reels max win?

The most you can win per spin is 6,055 x your total stake. The key to winning big is from the increasing multipliers from successive wins which adds more reels too.

What are Infinity Reels?

Land a winning combination and a new reel is added to the main set. Land a matching symbol on this new reel respin and the payout benefits from an expanding multiplier. The more reels added, the bigger the symbol multiplier.

How does the Jackpot Respins feature work?

The Jackpot Respins feature is a streak respin game. Each hammer that lands awards a cash prize of up to 100 x stake. Look out too for Mini, Minor, Major and Grand Jackpot symbols which award 10, 50, 250 or 2,000 x stake respectively.