Join Norse deity on a quest for riches in the Odin’s Wild Hunt slot, a myth and legend themed game from ReelPlay and High Flyer Games. This Scandi saga is the second release to use the Bonus Ways game mechanic where the number of ways to win on each spin can range from 729 right up to 262,144.  Look out for exploding reels, hammers that can add extra symbols, mystery transforming symbols that can morph into the most lucrative Odin symbol and a bonus round that awards up to 25 free spins. I liked the first Bonus Ways release, find out what the second is like in our detailed Odin’s Wild Hunt review.

Each spin in the Odin’s Wild Hunt slot starts on 6 reels, 3 rows and 729 ways to win. The Bonus Ways game engine means you can add to this number when the Hammer symbol appears.  To create a winner, land 3 or more matching symbols or wilds on adjoining reels, starting from reel 1.

Stake levels here range from between 20p and £20 per spin. Click on the Auto button above the green spin button and you’ll be able to set between 5 and 100 autospins, complete with win and loss stop limits.

The Odin’s Wild Hunt RTP is an impressive 96.57% which is well above average.  As well as a high RTP, the volatility is the upper range meaning big wins will be hard to come by. As a result, the max payout is 6,149 x your stake per spin or free spin. 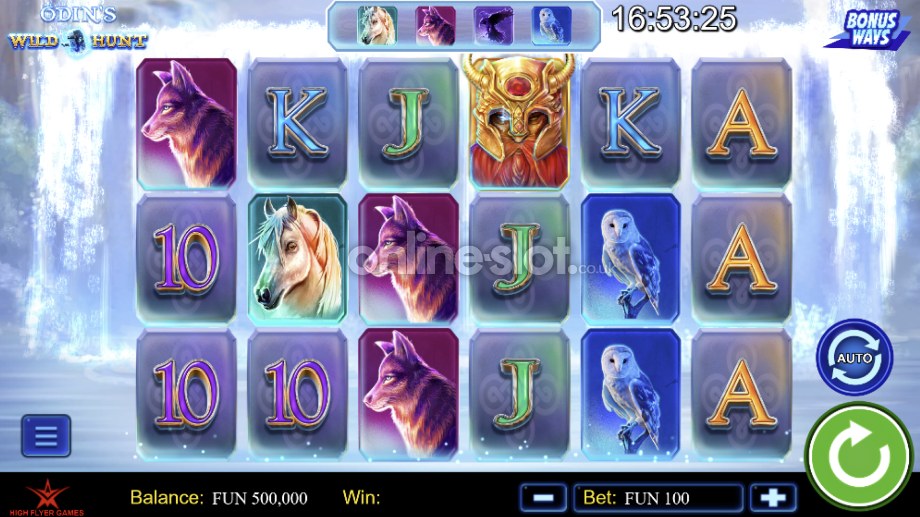 There’s a suitably fantastical feel to the design in the Odin’s Wild Hunt slot. With a Norse mythology theme, it has an orchestral soundtrack which gallops along nicely. If you like slots with plenty of atmosphere, you won’t be disappointed with what Odin’s Wild Hunt has to offer.

Those aren’t particularly large numbers. Remember, you can have up to 8 symbols on a reel on occasions which can deliver some decent clusters of symbols. There’s also a wild that can land on reels 2, 3, 4 and 5 and substitutes for all the standard symbols.

Odin’s Wild Hunt has been fully optimised for smartphone play. The imagery is nice and sharp, even when the reels are fully expanded. The sweeping soundtrack is better heard with some decent speakers. That aside, the Odin’s Wild Hunt mobile slot plays just fine.

You can expect plenty of action from the Odin’s Wild Hunt slot courtesy of a cracking selection of extras. For starters, there’s the Bonus Ways game engine. Also in play are symbols that can transform into wilds and a free spins feature.

Each time you land a winning combination, an explosion occurs. The successful symbols are removed from play and new ones drop in and replace them. So far, so standard.

What makes the Bonus Ways a little different is the Hammer symbol. When the Hammer appears on a reel, it adds 1, 2 or 3 extra positions to that reel for the following symbol explosion. This also increases the number of ways you’ll have to create a winning combination.

When the reels are at their minimum size, you’ll have 729 ways to win. If all 6 reels are fully expanded to their maximum 8 symbols high size, the number of ways to win rockets to a massive 262,144. 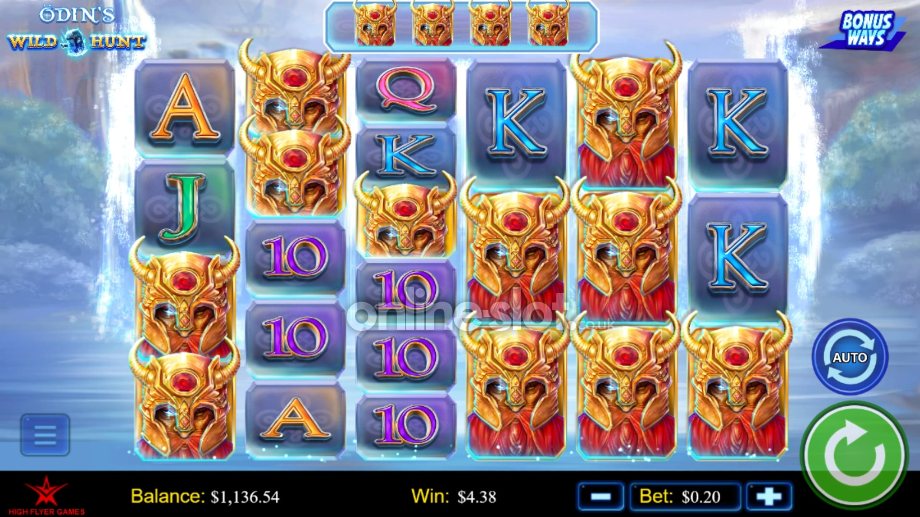 Get on a run with the exploding reel wins and you can bring the transforming symbols into play. After the first Exploding win, all the horse symbols morph into the most rewarding Odin symbol.

On the second exploding reels win, all wolf symbols turn into Odin followed by all the Raven and all the Owl symbols in you manage to land 3 or 4 Exploding Reels wins in succession. After a winless spin, all the symbols revert to their starting state.

The Bonus Ways game engine is active during the free spins, complete with the exploding wins and transforming symbols. Land 2 scatters on the same free spin and you’ll get another 5 free spins. Land 3 or more scatters for a full retrigger. You can win up to 50 free spins in total.

I was impressed with the Dynamite Mine Explosion slot, the first game to use the Bonus Ways game engine and ReelPlay/High Flyer Games has kept to largely the same formula for the second Bonus Ways slot, Odin’s Wild Hunt.

The Bonus Ways mechanic and exploding reels keep things moving along at a decent pace. The transforming symbols that come with the exploding wins are a tidy addition too. And what’s not to like about free spins? Combine the range of extras with the impressive sound and visuals and you have another very playable slot in the increasingly popular Norse legend theme.

If you want Norse mythology, the Thunderstruck 2 slot by Microgaming is highly recommended and is 1 of the most popular online slots of all time.

What is the Odin’s Wild Hunt RTP?

The Odin’s Wild Hunt return to player rate is 96.57% which is above average. Higher than the 96% average, it’s 0.07% higher than the similar Dynamite Mine Explosion.

What is the Odin’s Wild Hunt max win?

What are Bonus Ways?

When a hammer appears on a reel, the Hammer increases the number of symbols that can appear on that reel, up to a maximum of 8. That increases the ways to win too. Fully expanded, the reels can offer 262,144 ways to win.

Is there a Odin’s Wild Hunt free spins feature?

Yes, land 3, 4, 5 or 6 hunting horn scatter symbols will trigger the Free Games feature with 10, 15, 20 or 25 free spins. With Bonus Ways and Symbol Transformation active, you can play up to 50 free spins in total.