Try your luck on a supercharged fruit machine in the Joker Super Reels slot, an unusual 3 reel, 5 payline slot from ReelPlay. Instead of paying out immediately after a winning spin, the payout is saved in a meter. You can collect if you wish or save enough coins to have a crack at the Super Game feature. This is played on 64 ways to win reels. Keep an eye out for the jolly Joker which can award payouts of up to 400 x stake for each symbol that appears. Find out more about this simple slot in our detailed Joker Super Reels review.

The base action in the Joker Super Reels slot takes place on a 3 reel, 3 row machine that offers 5 paylines. Winners are formed by landing a 3 on a line combination on 1 of those 5 paylines. An extra row is added when you activate the Super Mode feature, which played on a 64 ways to win machine.

The Joker Super Reels RTP ranges from 96.08% up to 98.79%. Highly volatile, this unusual game can pack quite the punch payouts wise. The most you can win from a single spin is 1,350 x your total stake. 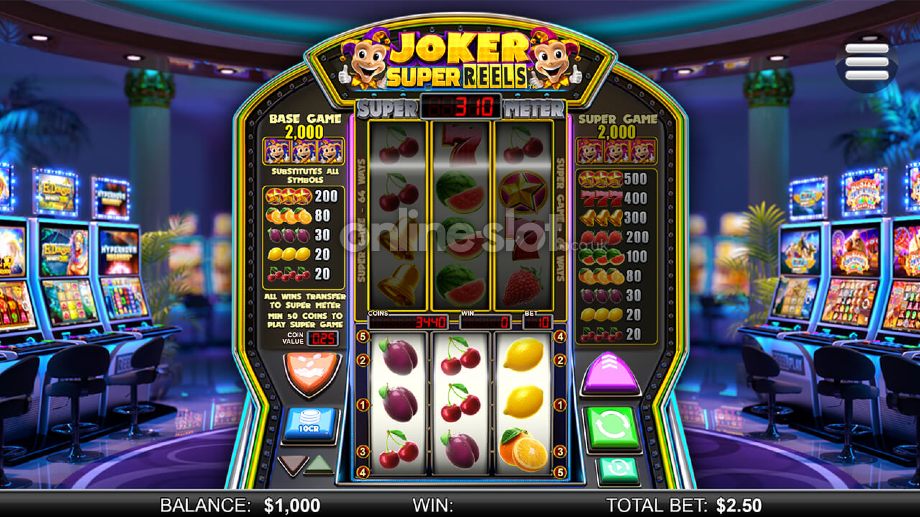 There’s a bright and breezy feel to the design in the Joker Super Reels slot. The setting is a classic arcade or casino. Expect flashing lights, garish visuals and a bouncy backing track here. You’ll also here the general hubbub from the players of the arcade. It’s bold, glitzy and rather in your face. Which is just what you’d expect from a slot with this theme.

The reels are set within a cabinet-style slot. There you’ll find a collection of old school fruity imagery including cherries, lemons, plums, oranges and gold stars. The smiling joker in the harlequin hat is the wild. He substitutes for all the standard symbols in the base game. Land 3 of these on a payline and you’ll win a payout of 400 x stake.

You can play this classic fruit machine reboot on all devices including desktop, tablet and mobile. The rather gaudy visuals work perfectly well on the smaller screen. The Joker Super Reels mobile slots comes together nicely.

At first glance, the Joker Super Reels looks slot like an extremely basic fruit machine. The gameplay here is relatively simple but there are opportunities to potentially really ramp up the action when you go on to play the Super Game.

If you land a winning combination, you’ll notice that the amount is saved in a meter rather than automatically being added to the cashier. You’ll have the opportunity to collect the payout if you wish. Just click on the collect button on the left-hand side of the screen. 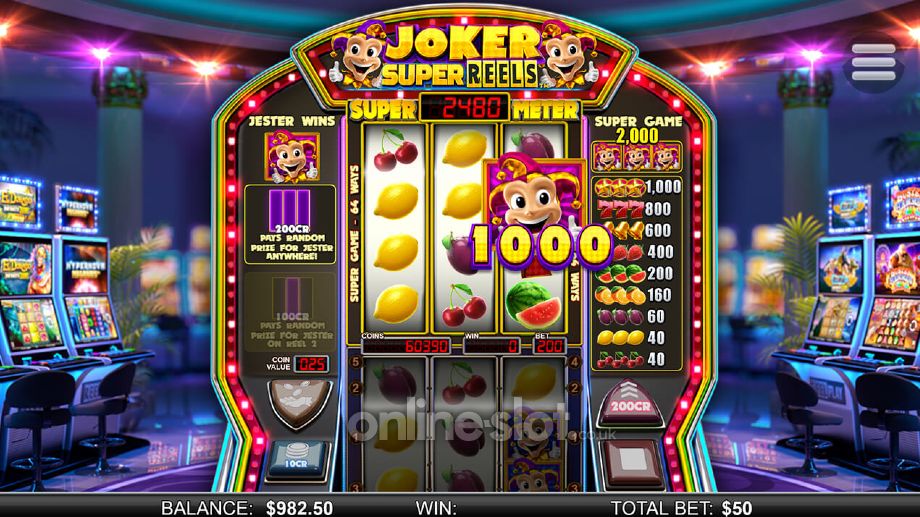 Alternatively, you can keep your money in the meter until you have amassed enough coins to activate the Super Game feature. You’ll need to have a minimum of 50 coins in the meter to start. Click on the Super Game button to the right of the reels to begin.

When you’ve activated the Super Game feature, you’ll move from the 5 payline machine at the bottom of the screen to the 64 ways to win machine at the top.

Each spin in will set you back 2.5, 5 or 10 x your stake per spin. In return for that extra investment, you’ll get an enhanced paytable. Landing 3 stars for example, pays  50 x stake in the Super Game compared to 20 x stake in the base game.

The Joker wild symbols can deliver some big rewards too. If you were playing at the 10 credit level in the base game, you can play the 100 credit Super Game. You’ll win a payout of between 5 and 400 x your total stake if you land a Joker on reel 3 when this is active.

If you were playing in 20 credit mode, you can up your bet to 10 x stake. Each Joker landing anywhere on the reels (not just on reel 3) awards a prize of between 5 and 400 x stake. You can land multiple Jokers on each Super Game spin which can deliver some big potential payouts. You’ll have the option to collect whatever is in the Super Meter at all times.

Despite more and more slots being released with a huge variety of extras and features, there’s still room for the retro fruit machine. That’s certainly true if they take the classic gameplay and give it a decent twist or 2.

ReelPlay has done just that with the Joker Super Reels slot. The Super Game feature can take a little getting used to so have a go in demo mode first if you can (above). It is a little confusing but it can lead to some decent wins if you land multiple jokers.

What is the Joker Super Reels RTP?

The Joker Super Reels return to player rate varies between 96.08% and 98.79%. This depends on what option you choose when playing the Super Game feature.

What is the Joker Super Reels max win?

The most you can win from a single spin in Joker Super Reels is 1,350 x your total stake. The key to winning big is from the jokers in the Super Game feature.

What is the Super Game feature?

After landing a winning base game combination, your winnings are collected in the Super Meter. You can collect the win or build up enough in the Super Meter to activate Super Game feature. This costs more per spin but landing Jokers can deliver instant wins.

Is there a Joker Super Reels mobile slot?

Yes, you can play Joker Super Reels on all devices including desktop, tablet and mobile. They all offer the classic fruity experience. With a twist!