Powered by ReelPlay, the Hypernova Radial Reels slot is a futuristic looking game that’s played using a highly unusual game engine. Played using circular ringed reels, winning combinations are created by landing matching symbols from the outer ring of the circle, through the centre and perhaps even out the other side. Cascades follow each successful spin. There’s also a Free Spins feature where wild multipliers can get as high as 300x. Discover all you need to know about this rather unusual slot in our in-depth Hypernova Radial Reels review.

The Hypernova Radial Reels slot is played on a machine that is made up of 3 concentric circles and a central position. To create a winning combination, you need to land 3 or more matching symbols in a line from the outer ring through to the central position.

The matching symbols can pass through the centre and come out the other side, which allows you to create winning combinations that range from a minimum of 3, right up to 6 symbols long. There are 12 paylines here. The right-hand side is made up of lines 1 to 6 with the left half comprising lines 7 through 12.

You can play Hypernova Radial Reels at stake levels that range from between 12p and £120 per spin. Just click on the coins to side of the reels to adjust. Autoplay is possible too. You can run between 5 and 100 autospins if required. There’s no way to set win and loss stop limits though, nor is there a quickspin mode.

The Hypernova Radial Reels RTP is 96.26% in standard play. If you buy the bonus, this increases to 97.3%. We found the action here to be rather explosive. We’d out the Hypernova Radial Reels volatility in the high range at around 8 out of 10. The max win is 25,000 x your total stake which will come in the free spins due to the potential 300x multiplier. 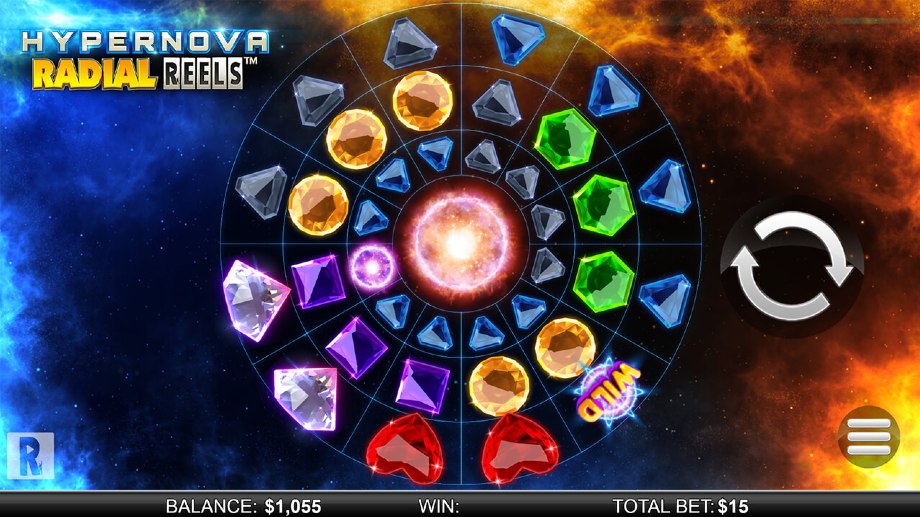 There’s a slightly futuristic feel to the design in the Hypernova Radial Reels slot. The symbols are lovely and sharp against the dark background. It’s simple but works well. The same goes for the electronic soundtrack that could come from a sci-fi movie. It’s rather understated but fits the theme very nicely indeed.

Set against a deep space backdrop, the rings of reels are made up of 10 brightly coloured gemstone symbols. The most rewarding is the pink diamond which delivers awards of up to 33.33 x stake per payline.

The imagery and sound work well on all devices including tablet and mobile. It’s a very nicely constructed slot.

As soon as you open up Hypernova Radial Reels, you’ll notice that it’s a different from your classic fruit machine. The game mechanic is very unusual. There are a couple of classic features to embellish the innovative gameplay though, including free spins with expanding multiplier.

Each time a winning combination is created, an explosion follows. Those successful symbols are removed from the rings and new symbols replace them. A new payout consideration is then made. If a new winner is formed the process is repeated. The explosions continue until no new winning combination is created. Known as the Explosions feature, this is referred as cascading reels/symbols in other slots. 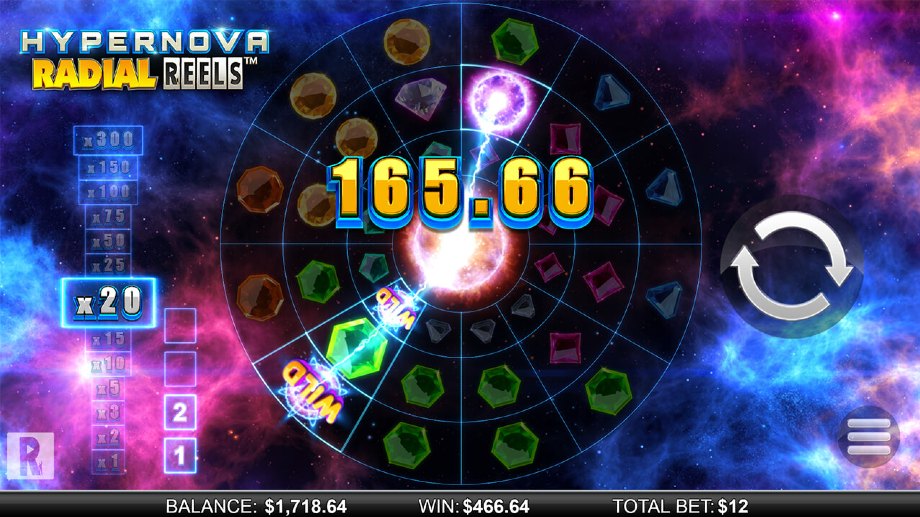 The shimmering purple orb is the scatter symbol. Land 3, 4, 5 or 6 purple orbs and you’ll pocket an award of 2, 10, 25 or 50 x your total stake. Hit 3 or more purple orbs on lines 1 through 6 on the right-hand side of the reels and you’ll activate the Free Spins feature.

Your reward is 4 free spins. Wins that include a wild come with a multiplier attached. The wild multiplier starts at 1x but increases by 1 each time a scatter symbol appears. The number of free spins also resets to 4.

It’s possible to land 2 lots of free spins from the same base game spin if you land 2 different sets of scatters on 6 different reels. These play out one after the other.

In some territories, you’ll have the option to buy the Free Spins feature. This will set you back 66.66 x your total bet. There’s a 1 in 25 chance that you’ll trigger 2 sets of free spins. Importantly, the RTP increases to 97.3%. Unfortunately, this option isn’t available in the UK.

The Hypernova Megaways slot has already proved popular and there’s no reason why this Radial Reels version shouldn’t also be a hit. The ringed game engine looks rather complicated on first view but the gameplay is actually more straightforward than you might imagine.

It’s certainly a little unusual but very playable. The Free Spins feature can deliver some top action too, especially if you land a good number of scatters for extra free spins and expanding wild multipliers.

We rather enjoyed the Hypernova Radial Reels slot. If you fancy something a little different, blast off here. By the way, another game to use circular reels is Yggdrasil Gaming’s Avatars: Gateway Guardians.

What are Radial Reels?

The game engine uses rings rather standard vertical reels. Land 3 or more matching symbols in a line from the outer to the inner ring (and perhaps even out the other side) to create a winner. Each win creates an explosion with new symbols dropping in. These continue until no new winning combination is created.

What is the Hypernova Radial Reels RTP?

The Hypernova Radial Reels return to player rate is 96.26% in standard play. If you’re able to buy the bonus (this option is only available in some territories), that figure rises to 97.3%.

What is the Hypernova Radial Reels max win?

The biggest possible win from the Hypernova Radial Reels slot is 25,000 x your total stake. The key to this is from the Free Spins feature where the wild multipliers can reach 300x.

Is there a Hypernova Radial Reels free spins feature?

Yes, the Free Spins feature is triggered by landing 3 or more scatters. You’ll receive 4 free spins. Each time a scatter lands the free spins tally resets to 4 and a wild multiplier increases in value. The wild multiplier can reach a maximum of 300x.