Take to the skies in a luxurious airship in the Wheel of Amp slot, a beautifully designed game from Red Tiger Gaming. Celebrating all things engineering from the early 20th century, there’s a steampunk feel to this 3 reel, 9 payline slot. Land 3 scatter symbols to trigger the Wheel of Amp feature where you can win free spins, a Step Change that unlocks a high paying symbol or expands the reels or a Win Boost that increases your payouts via a multiplier. Payouts here can reach 7,303 x stake from a single spin. Find out more in our full Wheel of Amp review.

Where to Play Wheel of Amp Slot

The action in the Wheel of Amp slot starts on a 3 reel, 3 row machine which offers 9 paylines. This can expand into a 5×5 grid with 25 paylines via the Wheel of Amp extras (more on this later).

Winning combinations are formed in the standard manner by landing 3 or more matching symbols across a payline, starting from reel 1. Stake levels here range from between 10p and £10 per spin.

The Wheel of Amp RTP is 95.77% which is slightly below average. High variance, this airship cruise can deliver some potentially big rewards though. The maximum win here is 7,303 x stake from a single spin. 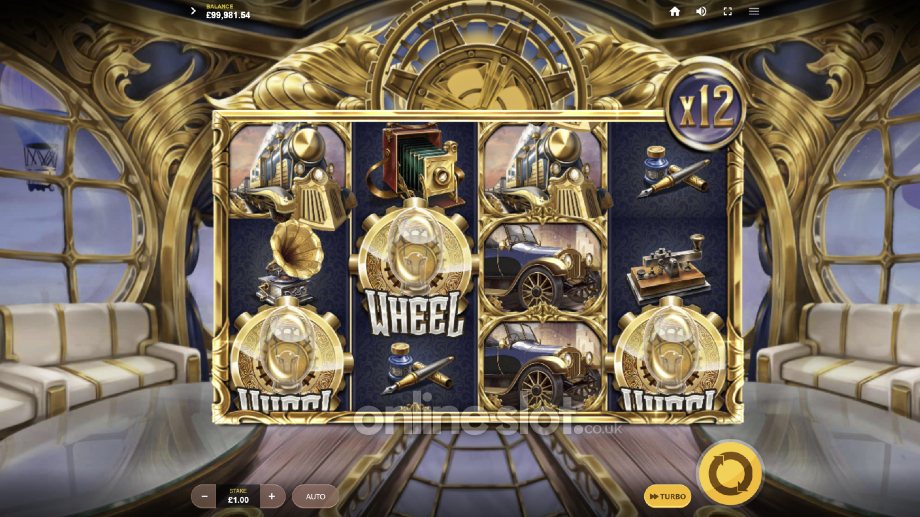 The design in Wheel of Amp is superbly done. With a steampunk theme, the setting is the cabin of a luxurious airship. Set in the early 20th century, the game takes place on the Zeppelin which is the airship named after the German inventor Ferdinand von Zeppelin.

Many Red Tiger Gaming slots can look quite dark graphically. However, the visuals here really are truly terrific. There’s a rich, opulent feel to the imagery. You’ll hear a classy soundtrack humming away in the background which delivers just the right level of atmosphere without being overly intrusive.  This is a gold-star slot as far as sound and visuals are concerned.

The plain blue reels are edged in gold where you’ll find a selection of objects relating to the golden age of inventions. In order of value are fountain pen and ink, a telegraph, telephone, gramophone and speaker. You can also unlock more lucrative velocipede, plane, car and locomotive symbols via a spin of the Wheel of Amp. The locomotive is the most rewarding symbol. Land 3, 4 or 5 of these on a payline for a payout of 2, 4 or 10 x your total stake.

You can play Wheel of Amp on smartphones and tablets as well as desktop devices. The high-class design works perfectly well if you’re playing on a small screen. The Wheel of Amp mobile slot is a cracker.

There are 4 bonus features in total. Unlock the Wheel of Amp feature and it can bring a variety of extras into play. You could see symbols upgraded, reels expanded and multipliers awarded. If the pointer falls nicely, you could also trigger the free spins. 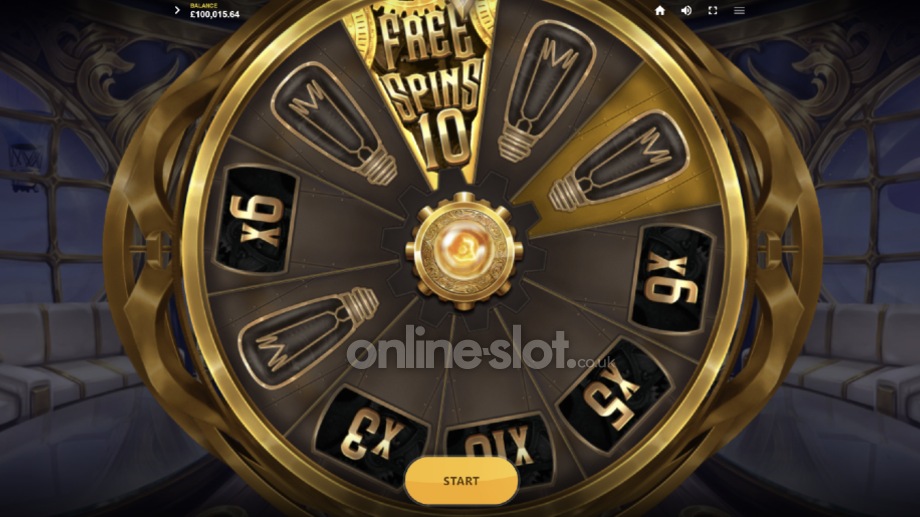 The Wheel of Amp feature is central to most of the best action on offer here. You’ll get a spin of it following a spin that includes 3 wheel scatter symbols. Depending on where the pointer lands, you’ll be rewarded with free spins, a step change or a win boost. Here’s what to expect:

To start with in the Wheel of Amp feature, 8 of the 10 segments will offer the Step Change feature:

The high paying symbols are unlocked in order, starting with the velocipede followed by the plane, car and locomotive.

If you get an expansion, an extra reel is added first followed by a row, a reel and another row. The game grid can reach 5×5 in size which takes the number of paylines up to 25 from the original 9. When you land a Step Change segment on the Wheel and it is awarded, that segment of replaced by a Win Boost multiplier the next time you trigger the Wheel.

A spin of the Wheel of Amp can also deliver the Win Boost feature. This is a multiplier boost which is applied to your next spin. The size of the Win Boost depends on which segment of the wheel the pointer lands on. 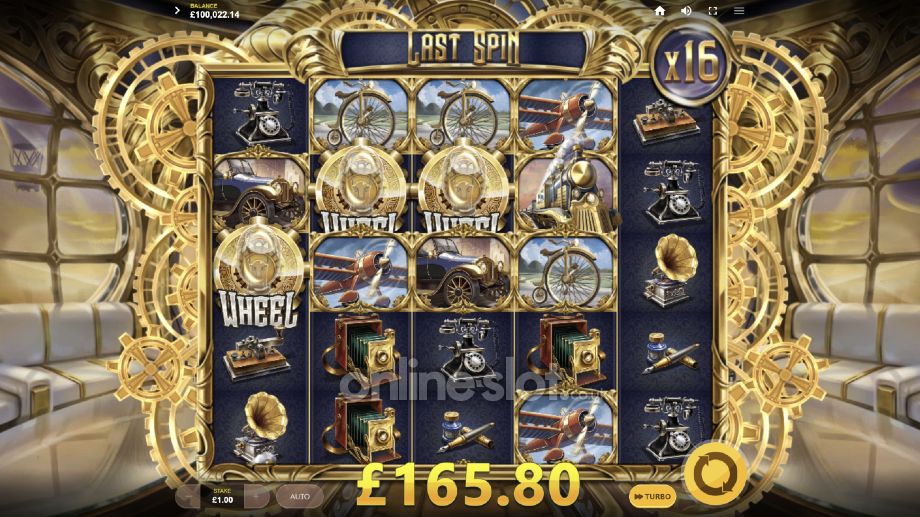 The slightly unusual extras in the Wheel of Amp slot take a little getting used to. It’s all the better for it though. The action revolves around the features on offer from the Wheel but they can deliver some top action. This is a slot where it’s a good idea to get your eye in while playing in demo mode.

Once up to speed, there’s a lot to like here. The design is from the top drawer and the gameplay offers a good level of variety courtesy of the Wheel. The key to big wins is from the multipliers which can reach 10x. If you get this during the free spins, all future free spins will be subject to that multiplier.

Usually, slots from Red Tiger can be a little dull and dark visually. Wheel of Amp is different, innovative and is one balloon flight I’m happy to take.

If you like the steampunk theme, Fortunium Gold: Mega Moolah by Microgaming offers you the chance to win 4 progressive jackpots including the Mega Jackpot which begins at £1 million. Another option is the Land of Zenith slot from Push Gaming which has a similar feel, offers 21,003 x wins and a unique mechanism.

What is the Wheel of Amp max win?

The max win comes in at an impressive 7,303 x your total stake per spin. The key to winning big is from the multipliers which come from the Win Boost feature.

What is the Wheel of Amp feature?

The Wheel of Amp feature is a special bonus wheel. Depending on where the pointer lands, it can unlock high value symbols, add more paylines, award multipliers or trigger free spins.

Are there any Wheel of Amp free spins?

Yes, the Free Spins feature begins with 10 free spins. The wheel can trigger to give you more free spins or a multiplier than can only increase during the feature. You can also unlock high value symbols and add more paylines.