Join a master cat burglar and try and make off with loads of loot in the Vault Cracker slot, a 5 reel, 10 payline game from Red Tiger Gaming. Look out for the Heist Master. When he appears on the middle reel, he triggers the Heist Master feature. This is a series of respins where each safe symbol that lands award a cash prize. Unlock all the safes and your total win get a potentially diamond multiplier boost.  Keep an eye out too for the Hold Up Artist who can crack open any safes on show on that spin to deliver an instant win. Does crime pay? Find out in our full Vault Cracker review.

Where to Play Vault Cracker Slot

The Vault Cracker slot is played on a simple 5 reel, 3 row, 10 payline machine. Winners are created by landing 3 or more matching symbols is a payline from left to right, starting from reel 1.

You can play at stake levels of between 10p and £100 per spin. Use the + and – buttons next to the Total Bet box below the reels and adjust to suit. Click on Auto and you can set 20, 50 or 100 autospins. There are also options to set win and loss limits. You can also set things so that the autoplay ends whenever you trigger a feature.

The Vault Cracker RTP is 95.66%. Medium variance, wins will land fairly frequently. The maximum you can win from a single spin is 1,410 x your total stake. 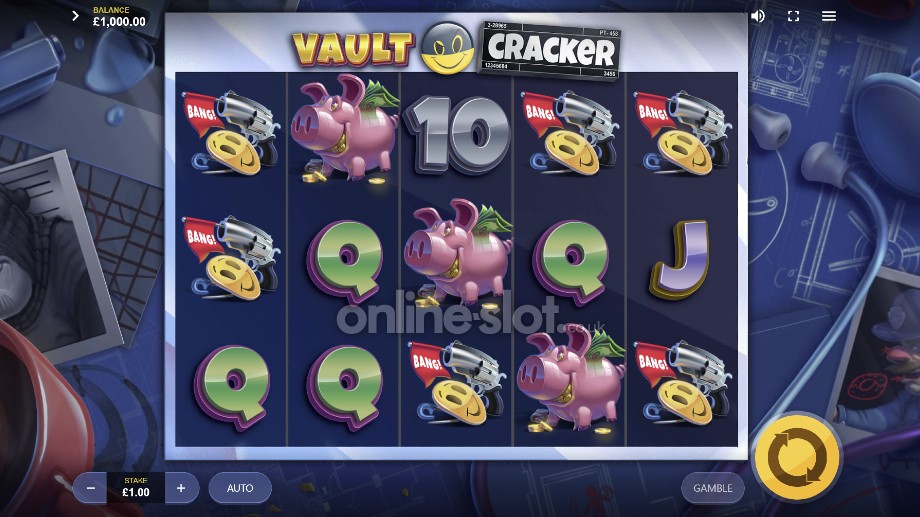 There’s a high spec, cartoonish feel to the design in the Vault Cracker slot. With a heist theme, the glossy visuals are complemented by a jazzy soundtrack that matches the crime caper theme very nicely. The design in Vault Cracker is light-hearted but rather impressive.

With plans and the Vault Cracker’s tools of the trade in the background, the reels include A to 10 royal symbols which appear alongside a fake gun, a piggy bank and jewellery. The bag full of cash is the most rewarding symbol. This awards 1.5, 3 or 10 x your total stake if you land 3, 4 or 5 across a payline.

There are 2 character symbols: the Heist Master and the Hold Up Artist who can appear on reels 3 and 5 respectively. These both trigger their own feature whenever they appear.

You can play Vault Cracker on all devices including computers, tablets and mobiles. The classy design works perfectly well on the smaller screen devices. So too does the simple gameplay. The Vault Cracker mobile slot plays well.

There’s a decent selection of extras on offer in Vault Cracker. They all revolve around cracking open a safe and in the process collecting a cash prize. 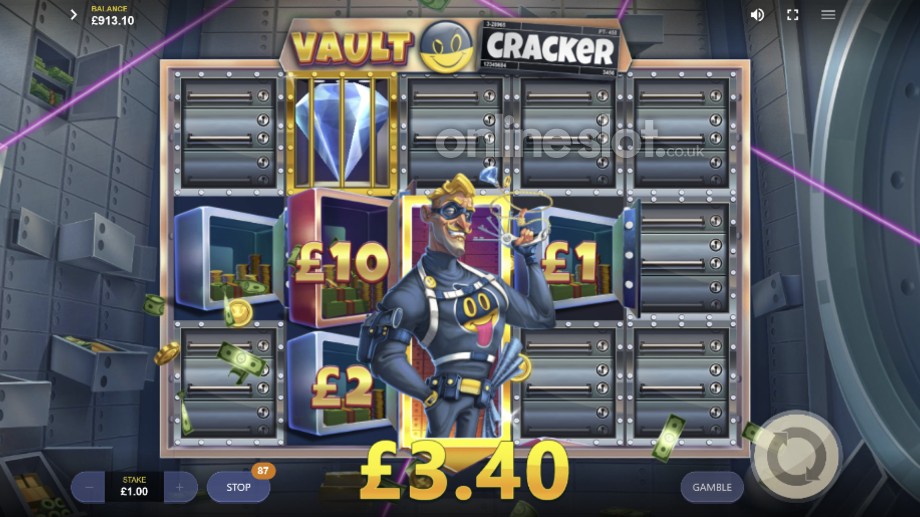 The rather dandyish Heist Master can land on the middle reel only. When he does, it triggers the Heist Master feature. You’ll then receive a respin on a new set of reels that are made up solely of blanks and safe symbols.

If a safe lands, it’s collected and another respin is awarded. The respins continue until there’s a spin where no new safe symbols appear. The values from all the collected safes is then added together for your final award. There are 3 different types of safe. Each of them offers a different value of prize:

During the Heist Master feature, you’ll see a diamond that is locked in a cage. If you manage to fill the whole of the screens with safes (of any combination of colours), you’ll unlock the diamond and trigger the Diamond Multiplier feature.

The diamond in turn delivers a multiplier which is then applied to your overall win from the collected safes in the Heist Master feature.

When you’ve run out of Heist Master respins, you’ll get a second chance to earn some more. Called the Second Chance feature, a pointer spins around a wheel. If it lands in the green portion of the wheel, the Heist Master feature plays again. If the pointer lands in the red, the round is over and you’ll return to the base game.

This bruiser of a character can appear on reel 5 only. When he lands, it triggers the Hold Up Artist feature. Any safe symbols that land on that spin crack open. The Hold Up Artist collects the vaults values which are added together to give you an instant win.

With Lupin proving a smash hit with Netflix viewers around the globe, the gentleman thief has never been so popular. The Vault Cracker slot is a pretty good adaptation of the heist theme. The design here is terrific. It’s bright, colourful and packed full of cartoonish detail.

The variety of features isn’t massive. If you’re after free spins and other bonus feature, you might be a little underwhelmed by what’s on offer here. The key to bigger wins is from the diamond multiplier which will boost your wins from the Heist Master respins. You’re unlikely to break the bank here but Vault Cracker delivers some entertaining play.

If you want a higher-octane heist, the Money Train 2 slot by Relax Gaming where you head to the Wild West to win u to 50,000 x your stake on each spin.

What is the Vault Cracker RTP?

The Vault Cracker return to player rate is 95.66% which is a little below average. Medium variance, the bigger wins will come from the various bonus features.

What is the Vault Cracker max win?

The maximum win from a single spin is 1,410 x your total stake. To win big amounts, you need the diamond multiplier to apply to the Heist Master respins.

What is the Heist Master feature?

The Heist Master feature sees you get respins with each safe adding another. When over, the values from all the collected safes are added together for your final prize. Collect all the safes to bring the Diamond Multiplier into play.

What is the Hold Up Artist feature?

When this character appears on reel 5, the Hold Up Artist feature applies. He collects the values from all the safes on view on that spin. They’re then paid out as an instant win.