Head to the jungle and join the wild apes in the Primate King slot, a 5 reel, 30 payline game from Red Tiger Gaming. Wilds are central to the action here. Look out for special coins which are overlaid on some standard symbols. Collect enough of them to fill a meter and you can bring a series of modifiers and even an extra sixth reel into play. These modifiers include stacked wilds, stacked multiplier wilds and sticky stacked wilds with expanding multipliers. With 10,000 x stake wins, find out all you’ll need to know about this jungle trek in our in-depth Primate King review.

Where to Play Primate King Slot

The base game action in the Primate King slot takes place on 5 reels, 4 rows and 30 paylines. If you unlock all the wild upgrades, a sixth reel comes into play which opens up the prospect of 6-symbol winning combination.  As usual for a paylines slot, winners are created by landing 3 or more symbols or wilds from left to right in a payline, starting from reel 1.

You can join the Primate King at stake levels that range from between 10p and £10 per spin. To adjust your stake, simply click on the + and – buttons in the bottom left-hand corner. The paytable displays the symbol values in coins. Divide the number by 30 to get the stake value.

The Primate King RTP is 96% which is about average. High variance, the most you can potentially win from a single spin here is 10,000 x your total stake. 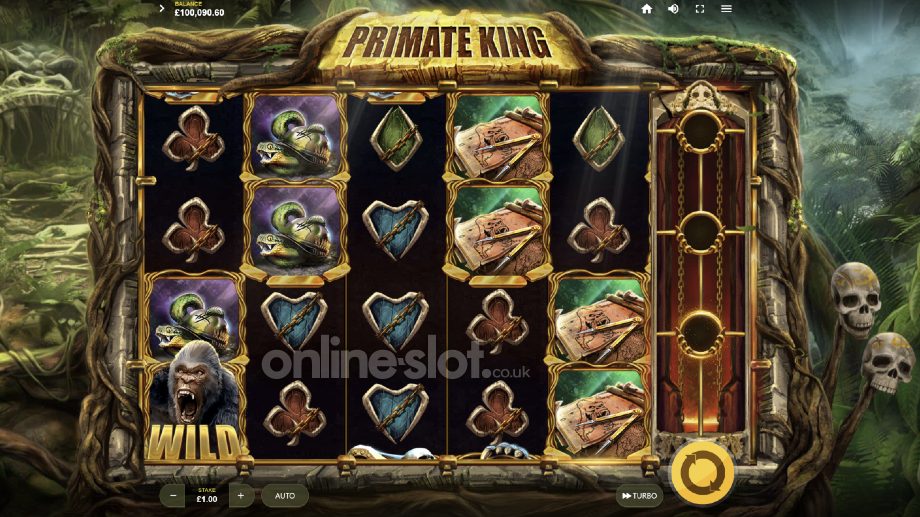 With a gorilla/jungle theme, the Primate King slot is beautifully designed. The game obviously takes inspiration from the Kong: Skull Island film. Dense jungle and ruined stone buildings and statues form the backdrop to the action.

There’s a dark, somewhat oppressive feel to the visuals here which is matched by a rather imposing soundtrack. You’ll hear the hum of the jungle alongside a thumping, up-tempo backing track. Expect plenty of atmosphere in this jungle trek.

The reels are made up of lower value playing card suit symbols enmeshed in chains and a collection of objects you might expect to see if you were going on a journey of exploration including maps and a compass. The treasure chest full of gold coins is the most rewarding symbol. Land 3, 4, 5 or 6 of these on a payline for a payout of 2.5, 5, 15 or 30 x your total stake.

The mighty gorilla is the wild symbol. This can land on all 5 reels. As usual, the wild substitutes for all paying symbols mentioned.

Primate King is available to play on all devices including desktops, tablets and smartphones. The rather dark design isn’t always the easiest to decipher and it took as a little while to get our eye in. The simple gameplay is well suited to mobile play though.

The gameplay in the Primate King slot is rather straightforward. This isn’t a game that’s overloaded with complex bonus feature. Instead, the gameplay revolves around wilds. Those wilds can come with modifiers attached which can really get things moving.

You’ll notice that some symbols come with a gold coin attached in the bottom right-hand corner. Each time one of these symbols land, the gold coin is collected in a meter to the right of the reels.

When you have amassed enough coins in the meter, you’ll trigger the Primate Wild Upgrade feature. This entitles you to a wild upgrade. There are 3 of these:

You can keep tabs on how many coins you’ve collected in the Progress Bar to the right of the reels. When you have unlocked all 3 upgrades, the Progress Bar feature comes into play. It turns into a 6th reel which is made up of higher value symbols only. This can give you lucrative 6-of-a-kind wins.

The Primate Smash feature can trigger at random on any spin where a Primate wild lands but no winning combination is created. The gorilla rumbles onto the screen, smashes all the lower value symbols and removes them from the reels. Higher value symbols will drop in and replace the vacated positions. A new payout consideration then follows with the newly added symbols in place.

The Primate King slot is all about the wilds. On their own, they deliver decent enough action. The action can really motor though when you activate the upgrades and potentially the sixth reel.

The key to winning big comes from the multipliers though. The max win per spin is 900 x your total stake. If the multipliers work their magic, you could pocket 10,000 x stake wins on each spin. The only negative in this game is that there isn’t a Free Spins feature.

However, I found there was no shortage of action though courtesy of the wild upgrades. If you like the jungle theme and simple gameplay, an audience with the Primate King could be for you.

What is the Primate King RTP?

The Primate King return to player rate of 96% on the nose is about average. This is a high variance game though with the bigger wins coming the various bonus features.

What is the Primate King max win?

The maximum win is an impressive 10,000 x your total stake from a single spin. This can be achieved from the second and third Primate Wild upgrades.

What is the Primate Wild Upgrade feature?

Collect coins to fill meters in order to trigger the Primate Wild Upgrade feature. With 3 upgrades available, you can benefit from wild reels, wild reels with a multiplier and a sticky wild reel with an increasing multiplier.

How does the Progress Bar feature work?

When you’ve completed all 3 upgrades, the Progress Bar feature is activated. A sixth reel appears which only displays high value symbols. It will also give you more valuable 6-of-a-kind payouts.