Take to the high seas and try and pillage a bumper jackpot in the Pirates’ Plenty Megaways slot. This seafaring adventure has been created by Red Tiger Gaming and comes with a wide range of extras. With up to 200,704 ways to win, Lady Anne is an expanding wild that fills the whole reel whenever she appears. This wild also comes with multipliers of up to 8x attached. Look out too for the wild monkey which removes lower value symbols from the reels then turns into a sticky wild. Trigger the Free Spins feature for a minimum of 9 free spins where your winning chances are boosted by an increasing multiplier. Find out more in our Pirates’ Plenty Megaways Review.

The Pirates’ Plenty Megaways slot uses Big Time Gaming’s famous Megaways engine. The number of symbols on each spin varies. This has an impact on how many ways you can form a winning combination. If all 6 reels have the maximum 7 symbols, you’ll have 117,649 Megaways in play.

Winning combinations here are created by landing 3 or more matching symbols or wilds on adjoining reels, starting from reel 1.

You can set sail on this pirate ship at stakes that range from between 10p and £10 per spin. In some countries, you will find an Auto Spin function and Quick Play facility.

The Pirates’ Plenty Megaways RTP is 96%. High variance, the bigger wins will come when play with more Megaways or from the bonus features. The most you can win from a single spin here is 10,489 x your total stake. 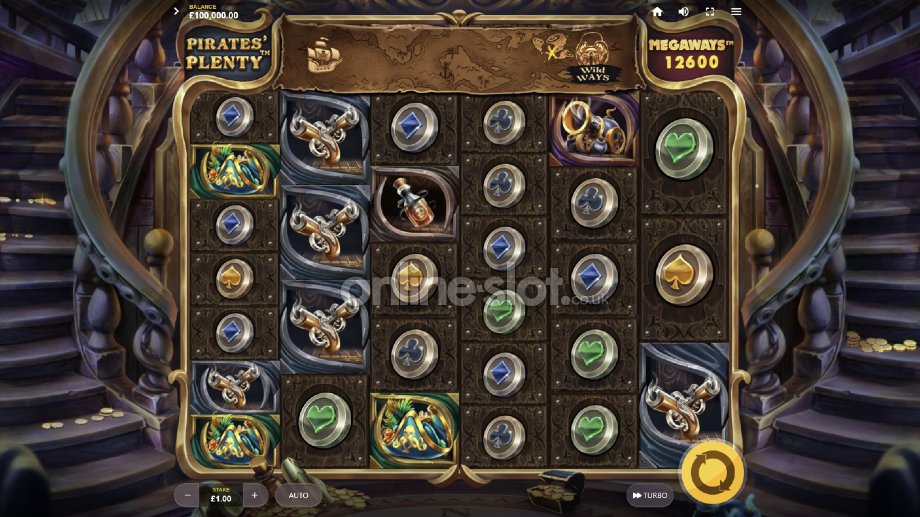 The deck of a classic pirate ship is the setting in the Pirates’ Plenty Megaways slot. This is the 3rd in the series following on from Pirates’ Plenty: The Sunken Treasure and Pirates’ Plenty: Battle for Gold. You’ll see octopus tentacles, clambering onto the wooden deck alongside rigging and a compass.

The adventure-style soundtrack fits the theme here rather well though. It feels a little like Pirates of the Caribbean truth be told but that isn’t a bad thing.

Symbols on the reels include 4 lower value playing card suit symbols. They’re joined by 5 higher value symbols that are associated with the buccaneering theme. You’ll see a bottle of grog, muskets, a cannon and a tricorn hat. The most lucrative symbol is the skull and cross bones. Land 3, 4, 5 or 6 of these in combination for a payout of 0.7, 1.2, 2 or 3.5 x your total stake.

Those don’t sound like huge amounts but remember the potentially large number of ways to win as well as multiplier wilds which can boost payouts by up to 8x. Brown dominates the colour scheme here and the symbols aren’t the brightest that you’ll see.

You can join Lady Anne on her pirate adventure on mobiles and tablets as well as desktop computers. Individually, the symbols are all superbly drawn. There’s a bit of a similarity when it comes to the colour and style of the higher value symbols which aren’t always the easiest to make out. Overall, though, the design here is fine.

There’s plenty going on in this seafaring swashbuckler. With 4 bonus features, highlights include expanding wilds with multipliers, spins with sticky wilds and a free spins feature with an expanding multiplier.

Collect map symbols to unlock the Wild Ways feature. This helps a pirate ship sail across the reels at the top of the screen to the other side. When this happens, an extra row appears on the middle 4 reels. This in turn can increase the number of Megaways to 200,704.

The Lady Anne Wild symbol can land on 1 of the 4 unlocked positions at the top of the middle 4 reels. When she appears, the Lady Anne Wild feature is triggered. Anne expands to turn the whole of that reel wild. The Lady Anne wilds also come with a multiplier of between 3x and 8x attached. If Lady Anne doesn’t form part of a winning combination when she first appears, she locks in place until she does.

This cheeky character can appear on any spin to trigger the Wild Monkey feature. He removes all the lower value symbols from the reels. A new spin follows made up of higher value symbols with the monkey turning into a sticky wild. 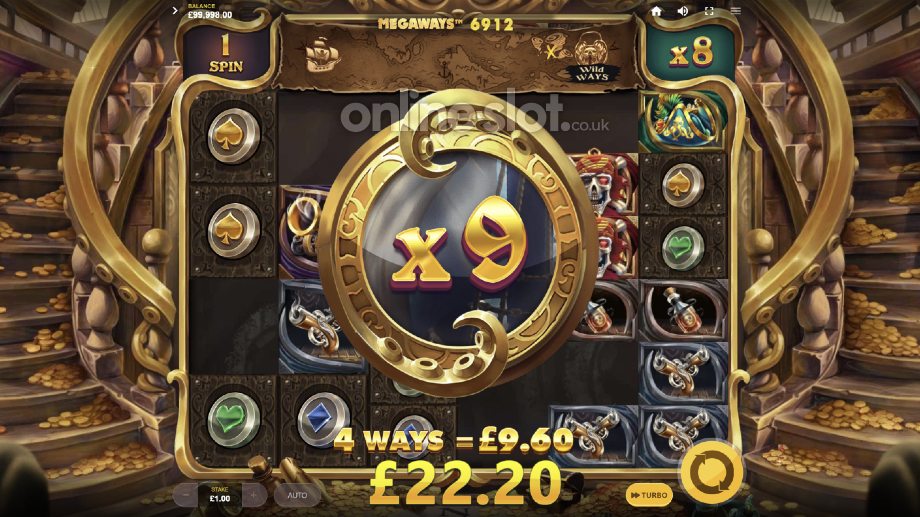 Land 3 scatter symbols on the same spin you will trigger the Free Spins feature with 9 free spins. Each extra scatter on the triggering spin adds another 3 free spins to that total, up to a maximum of 18.

Each time you land a winning combination during the free spins, a win multiplier increases. This keeps on rising throughout the feature. Unlimited retriggers are possible here too.

Red Tiger Gaming has taken the shell of the Megaways mechanic and bolted on a few extras to make what might have been a rather dull slot into something potentially far more interesting.

Collecting ships to fill the treasure map not only offers the potential for 200,704 Megaways. It also brings expanding wilds into the mix, complete with their mighty multipliers of up to 8x. The Lady Anne Wild feature is the key to big wins in the base game.

The biggest wins will come in the Free Spins feature due to the increasing wild. The Wild Monkey feature is a nice addition too. However, it doesn’t offer anything you haven’t come across before in countless other Megaways slots. Saying that, it’s the best in the Pirates’ Plenty series due to the max win being a lot higher (more than double).

If you want to pillage for doubloons though, the 123 Boom slot by 4ThePlayer offers something different in terms of the Slot Slider feature and max wins of 14,727 x stake per spin.

My recommendation would be Pirate Pays Megaways by Big Time Gaming. There are Compass wilds, increasing multipliers and free spins. More importantly, it comes with 104,400 x stake max wins.

What is the Pirates’ Plenty Megaways RTP?

The Pirates’ Plenty Megaways return to player rate is 96% which is average for an online slot game. The variance is high though with most wins coming from the features.

What is the Pirates’ Plenty Megaways max win?

The maximum win from this seafaring adventure is 10,489 x your total stake from a single spin. The key to winning big is from the Lady Anne multipliers or from the increasing multiplier in the free spins.

Are there any Pirates’ Plenty Megaways free spins?

Yes, the Free Spins feature begins with up to 18 free spins. With unlimited retriggers, each win increases the multiplier by 1, with no limits.

How does the Lady Anne Wild feature work?

Land Lady Anne on 1 of the 4 unlocked positions at the top of the reels and you’ll play the Lady Anne Wild feature. Lady Anne becomes a wild reel with a multiplier up to 8x. They stay in play until a winner lands.