A classic fruit machine with a couple of funky features is what’s on the menu in the Mystery Reels slot. Red Tiger Gaming’s latest take on the ultimate slot machine format is played using a 5 reel, 20 payline game engine.

In our in depth Mystery Reels review, you’ll find out about special ? symbols which can spread and then transform into the same matching symbol to create some big winning combinations. The feature is a spin the wheel bonus where each spin awards a multiplier prize which can get as high as 5,000x your total stake. What’s this volatile slot like to play? Read on to find out.

Where to Play Mystery Reels Slot

The ? in the golden apple symbol is the special Mystery Symbol. Whenever one of these lands, a number will appear on it. The Mystery Symbol then nudges up and down, side to side turning symbols into Mystery Symbols. The number of nudges varies depending on the number shown on the triggering Mystery Symbol.

The Mystery Symbols then shuffle through the symbols. They will all transform into the same symbol that is stopped on. A payout calculation is then made with the new combination of matching symbols in position.

Each time a Bonus symbols lands, you’ll get 1 spin in the Wheel Bonus feature. The Bonus Wheel is made up of 10 segments. In a segment, you’ll find a multiplier prize which is applied to your total stake if the pointer lands on it.

There are also segments that award extra spins of the wheel, add a certain number to each prize or double all multipliers. There’s also a ? segment which delivers a mystery award.

With the Mystery Symbols, it’s possible to land anything up to 15 spins which can deliver some potentially massive rewards. The maximum payout stands at a cool 5,000x your total stake.

The 5 reel, 3 row machine offers 20 paylines. Winning combinations are created by landing 3 or more matching symbols, starting from reel 1. You can play at stakes that range from between 20p and £20 per spin. That’s not the highest maximum bet you’ll see but should be more than sufficient for all but the highest of high rollers.

Red Tiger’s standard autoplay function is available in Mystery Reels. Just click on the Auto tab below the reels. You can set between 10 and 100 spins with loss and win limits adjusted accordingly. You can also stop the autoplay when you trigger the Bonus Wheel. Quicken the pace by playing in Turbo mode. Again, all you have to do is click the button below the reels.

The gameplay in Mystery Reels might be relatively simple but this old school fruity can certainly pack a punch on the payout front. This is a volatile slot and the variance is high. If you like high risk but potentially high reward play, you shouldn’t be disappointed with what Mystery Reels has to offer. The most you can win is 5,000 times your total stake from the Wheel Bonus feature. The RTP rate is 96.24%. 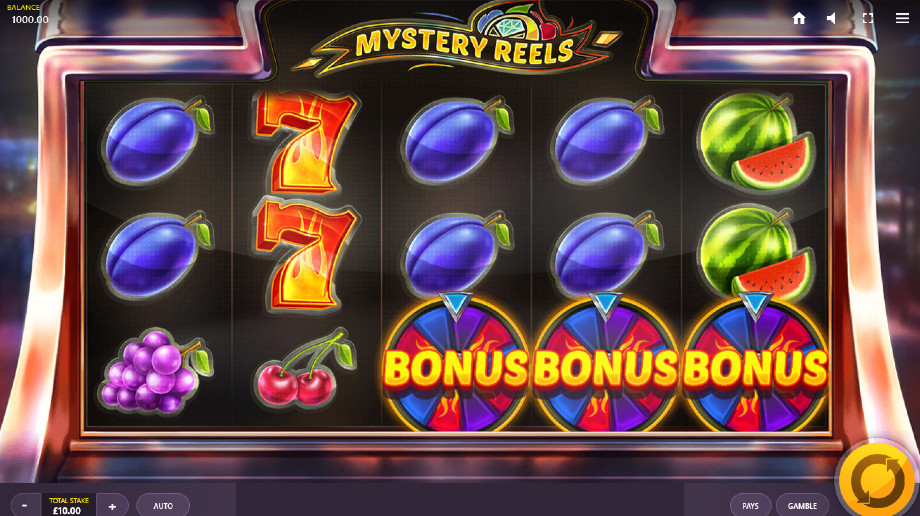 There’s not a huge amount of wiggle room for developers looking to jazz up the classic fruity format. If the visuals are bright, colourful and clear, you can’t go too far wrong. And that’s just what Red Tiger Gaming has delivered with Mystery Reels.

The reels are set within a brick and mortar casino slot cabinet. The plain black reels include the usual collection of retro symbols including cherries, lemons, oranges, plums, grapes, melons and bells. The flaming 7 is the most rewarding symbol. Land 5 on a payline and you’ll pocket an award of 45 times your stake. There isn’t a wild symbol, nor is there a standard scatter.

The on-screen action is accompanied by a bouncy, electro backing track. It’s not especially catchy but it matches the theme pretty well. The no frills visuals do the job rather nicely here.

The simple design of the classic fruit machine is well suited to play on a handheld device. Mystery Reels is a case in point. The bright, colourful symbols are lovely and crisp against the black backdrop. It’s all very easy to follow. The Wheel Bonus feature is very straightforward too and is another good fit for mobile play. No complaints about Mystery Reels mobile.

You won’t find a more classic slot theme than the old school fruit machine. Despite its veteran status, it remains hugely popular with players and developers alike. The concept is nicely realized in Mystery Reels which takes the classic format and adds the odd wrinkle here and there.

The Mystery Symbols can certainly pep things up, especially if you land a good number of bonus symbols and land multiple spins of the wheel. If you like the simple pleasures offer by the humble fruity, then the volatile Mystery Reels should appeal. Red Tiger Gaming has since use Big Time Gaming’s popular mechanic to create Mystery Reels Megaways – in this version you can win 10,000 x your stake on each spin.

❓ What is the Mystery Reels RTP?

It’s neither the highest nor the lowest around but the RTP of 96.24% is somewhere in the mid-range. Hit frequency is about 1 in 5 spins so you need to be patient and hope you trigger the Wheel Bonus feature.

🥇 What is the Mystery Reels max payout?

If you land a good number of spins in the Wheel Bonus feature and get lucky with the double multipliers, some very big awards are possible. The maximum payout is 5,000 x your total stake.

🎰 Is the Mystery Reels slot volatile?

Mystery Reels is a rather volatile slot. The variance certainly rates being in the high category.

⚡ Can I play Mystery Reels for free?

Yes – the Mystery Reels demo version can be played here at Online-Slot.co.uk – there’s over 3,000 slots to enjoy including in-depth and expert reviews.