Escape the grind of the office with a wild start to the weekend in the Lucky Fridays slot. With each spin in the office setting, a clock ticks forward by an hour. When it reaches 6pm on Friday, it’s party time until midnight. During this period, the higher value symbols are upgraded in value and you could trigger 1 of 3 random features. These include spins with all the lower value symbols removed, multipliers of up to 12x and colossal 3x3 wilds. Prizes in this volatile slot can top 3,655 x your stake. Found out all you need to know in our in-depth Lucky Fridays review.

Where to Play Lucky Fridays Slot

The Lucky Fridays slot comes with 5 reels and 30 paylines. A win is formed when you land 3 or more identical symbols beginning from reel 1 on successive reels

You can play this game at stake levels of between 10p and £20 per spin. Just click on the Stake button and adjust accordingly. Click on Auto to run 20, 50 or 100 autospins. Loss stop limits are required. You can also bring other filters into play if you go into the Advanced settings.

The Lucky Fridays RTP is 95.77% which is a little on the low side. The theme here might be pretty mundane but the volatility is very high. The Lucky Fridays maximum win is 3,655 x your total stake. 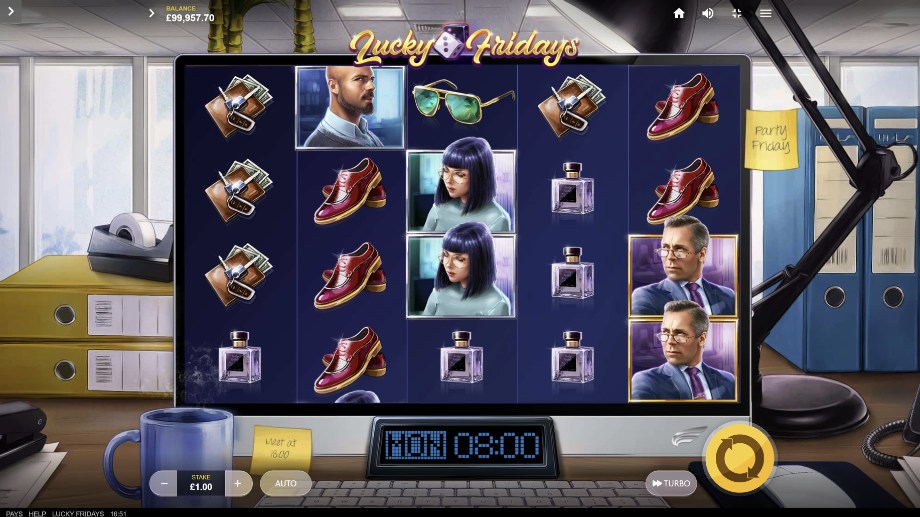 A rather dreary office is the setting for most of the play in the Lucky Fridays slot. The reels appear on a desk and are surrounded by binders, a stapler, pens, pencils and Post-It notes.

The visuals here are perfectly fine. Likewise, the soundtrack. In office mode, it sounds like a calculator or cash register tapping away before turning into something far more energetic once Party Time arrives.

On the reels you’ll find bottles of aftershave, car keys, shoes, sunglasses and a gold watch as well as 4 higher paying workers in their office clothes. The male character with glasses is the highest paying as 5 in combination pays 10 x your total stake.

The setting changes to a wild party once the working week is over and it’s 6pm on Friday. That heralds the start of Party Time. The design gets much livelier and the rather staid office workers get to let down their hair. Party Time also heralds the arrival of upgraded symbols and a trio of potential features. We’ll look at these in detail below.

Red Tiger Gaming has created a Lucky Fridays mobile slot which is available to play if you have an Android or an Apple iOS handset. You’ll find the same unusual theme, gameplay and features regardless of what type of devices you’re using. The mobile version is perfectly playable.

There are some classic features on offer in the Lucky Fridays slot. They include colossal wilds, big multipliers and high value symbol only spins. The way the features are triggered in Lucky Fridays is rather unusual though.

Instead of landing scatters, the bonus features become active during a specified time period. Below the reels, you’ll see a digital clock. This ticks through the working week from 9am on Monday. You’ll progress 1 hour with each spin.

When the clock ticks on to 6pm on Friday it triggers the Party Time feature which is when things can get much more interesting. Party Time is active until 12pm on Friday. The clock resets to the start of working week, 8am, and you’ll have to wait again until 6pm on Friday for the features to become active.

When it’s Party Time, the office workers get out of their suits and put on their glad rags. They also receive an increase in value with the Symbol Upgrades feature. For example, the top paying office worker pays 10 x stake for 5 in combination in standard play. This increases to 15 x stake during the Party Time feature.

As well as a symbol upgrade, you could also randomly land 1 of the features below:

When the Party Reels feature becomes active, all the lower value symbols are removed from the reels. A single spin follows with just higher value symbols in play which can really boost your winning chances.

During the Wild Party feature, a massive 3×3 wild symbol is added to the reels. As usual, this substitutes for all the standard symbols.

This awards a multiplier boost on your next winning spin which can send payouts rocketing by up to 12x. If you don’t land a win during party time, the multiplier carries over to office mode.

An office in Slough isn’t the most obvious setting for a smash hit TV comedy but Ricky Gervais proved there’s gold to be found in even the most seemingly mundane locations. A boring office seems an unlikely place to set a video slot too. Bizarrely, the Lucky Friday slot kind of works.

The base game can be a little on the dull side but there’s some decent action on offer when the clock reaches 6pm on Friday and Party Time starts.

At least you know exactly how long you’ll have to wait to trigger those features. We found them to be rather hit and miss when they did trigger but that’s not surprise given the extremely volatile nature of Lucky Fridays.

The theme and unusual way the bonus features come along mean that Lucky Fridays is worth trying. Overall, Red Tiger Gaming has done well with this rather strange slot. Red Tiger also offers you the Wild O’Clock slot game where a bonus feature triggers on every 12th spin.

What is the Lucky Fridays RTP?

The Lucky Fridays return to player rate is 95.77% which is a little below average. This slice of office life is highly volatile though with the bigger wins coming from the bonus features.

What is the Lucky Fridays max payout?

The most you can win in Lucky Fridays is 3,655 x your total stake. The key to winning big is from the Multiplier Party feature which gives you a multiplier up to 12x.

What happens in the Party Time feature?

The clock clicks through the working week with each spin, advancing 1 hour at a time. From 6pm until midnight on Friday, the Party Time feature is active. The high value symbols upgrade in value and you could land a 3×3 wilds, a multiplier of up to 12x or a spin with all the low value symbols removed.

Is there a Lucky Fridays mobile slot?

Yes, Lucky Fridays can be played on mobile devices that use iOS, Windows or Android technology. It’s also available on tablet and desktop devices.