Go into battle with the ancient Greek goddess of strategy and wisdom in the Legend of Athena slot. This myth and legend-themed game comes from Red Tiger Gaming and is played using 5 reels and 10 paylines. Any win that includes Athena’s wild spear benefits from a 3x multiplier with the payout trebled. Trigger the Battle Spins feature and you can look forward to 12 free spins with all payouts trebled. Even better is if you land a winner during the free spins that includes the wild spear as that combines with the standard multiplier to deliver a massive 9x boost. Find out more in our full Legend of Athena review.

Where to Play Legend of Athena Slot

The Legend of Athena slot is played on a basic 5 reel, 3 row, 10 payline machine. To create a winner, land 2 or more matching symbols or wilds on a payline from left to right, starting from reel 1. Winners that include wilds can be very lucrative, as you’ll discover shortly.

You can play this slot at stake levels of between 10p and £20 per spin. Use the + and – icons in the bottom left-hand corner of the screen and adjust accordingly. To activate autoplay, simply click on the Auto tab below the reels. You’ll be able to run 20, 50 or 100 autospins. There are options to set win and loss limits here. You can also end the autoplay each time you activate the bonus round.

The Legend of Athena RTP is 95.75% which is slightly below average. High variance, the most you can win from a single spin here is 6,550 x your total stake. This will come in the free spins due to the potential 9x multiplier. 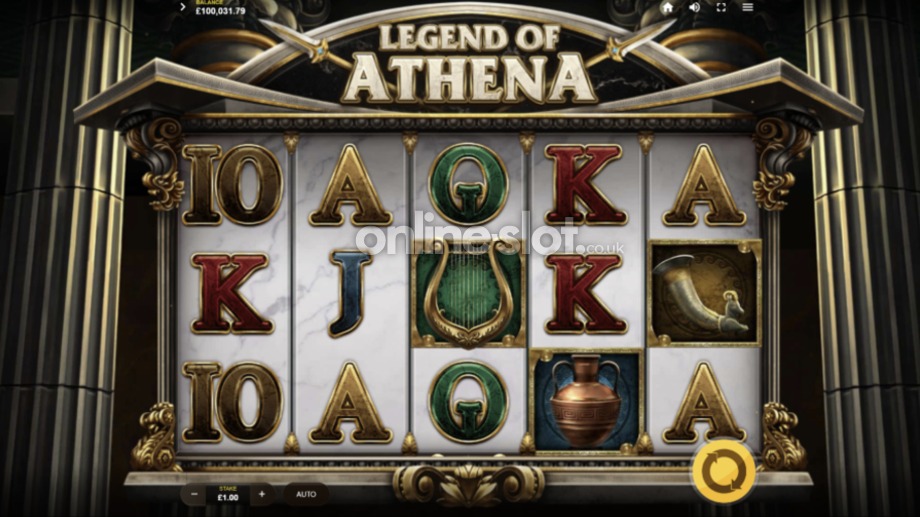 The orchestral soundtrack is rather understated but is a good fit for the theme. The sound and visuals here are dark but there’s a rather classy feel to them. It all comes together very well.

Flanked by a pair of marble columns, symbols appear on marble reels. You’ll see A to 10 royals alongside a cornucopia, a vase and a harp. The most rewarding symbol is the Spartan warrior’s helmet. Land 2, 3, 4 or 5 of these on a payline for an award of 1, 8, 40 or 200 x your total stake. Athena is the wild symbol and substitutes for all paying symbols.

Legend of Athena is available to play on all devices including desktop computers, Android and Apple iOS powered smartphones and tablets. This is a slot that’s suited to mobile play. The clean, crisp design works well on the small screen, as does the straightforward gameplay. You won’t go wrong playing the Legend of Athena mobile slot.

This classically-themed slot comes with suitably classic features. Highlights include wilds that treble payout when they make up part of a winning combination as well as a free spins feature where even more multipliers can come into play.

Athena brandishing a mighty spear is the game’s wild symbol. This can appear on all 5 reels and substitutes for everything apart from the bonus scatter symbol when it makes up part of a winning combination.

That’s not the only power that Athena’s spear has though. Land a winner that includes the wild and the payout benefits from a 3x multiplier with the payout trebled. As you’ll discover, things can get even better when you trigger the game’s Battle Spins feature. 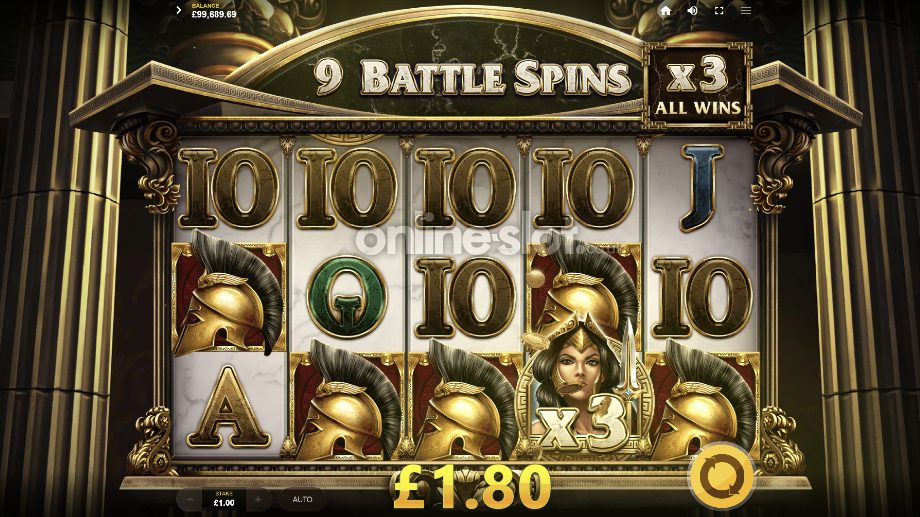 Each time a Battle Spins scatter symbol lands during the feature, 3 more free spins are added to your total, with no limits.

Red Tiger Gaming has kept things simple and straightforward in the Legend of Athena slot. That’s the case with both the design and gameplay.  It might not be a slot that’s overflowing with extras but the basic gameplay can pack a very decent payout punch thanks largely to the multipliers.

The bigger wins will come in the free spins due to the potential 9x multiplier. Just hope you land a win including a wild symbol.

The ancient Greek theme is among the most popular in the world of online slots. Legend of Athena isn’t the most innovative addition to the genre but the classy sound and visuals and impressive feature make this trip back to the age of antiquity a very playable one.

If you want more ancient Greek adventure, the Age of the Gods slot by Playtech features figures such as Athena, Zeus, Hercules and Zeus. There are also 4 progressive jackpots. If it’s Athena you’re after, Rich Wilde and the Shields of Athena from Play ‘n GO is pretty impressive and comes with 10,000 x stake wins.

What is the Legend of Athena RTP?

The Legend of Athena return to player rate is 95.75% which is a little on the low side. On the plus side, it offers big wins in the base game and free spins due to the multipliers.

What is the Legend of Athena max win?

The maximum win here come in at an impressive 6,550 x your total stake. This can be won from each free spin due to the potential 9x multiplier.

How does the Spear of Athena Wild feature work?

When you get a in with an Athena wild, you will trigger the Spear of Athena Wild feature. The win is subject to a 3x multiplier. This also applies in the free spins.

Are there any Legend of Athena free spins?

Once you trigger the Battle Spins feature, you’ll get 12 free spins with all payouts trebled. Land a winner that includes a wild and you’ll benefit from a 9x multiplier boost. You can also win unlimited extra free spins.