There are goodies galore up for grabs in the Jingle Bells: Power Reels slot, a Christmas-themed game from Red Tiger Gaming. Played using an unusual 8 reel, 40 payline game engine, look out for plenty of extras that can spice up the festive action. Highlights include mega 5x6 wilds, Christmas tree multipliers, raining wilds and spins with only high paying symbols. There’s also a free spins feature where you could benefit from all Santa’s modifiers. Payouts in this volatile slot can reach 6,544 x stake from a single spin. Discover more in our detailed Jingle Bells Power Reels review.

The setup in the Jingle Bells: Power Reels slot is rather unusual. The action plays out with 8 reels, 6 rows, and 40 fixed paylines. Winners are formed by landing 3 or more matching symbols (or just 2 bells) or wilds on a payline, starting from reel 1.

Click on the Stake tab in the bottom left-hand corner to adjust your bet size. This starts at a minimum of 10p per spin and rises to a maximum of £10 per spin. Next to that is the Auto button which allows you to run 20, 50 or 100 autospins. There are options to set win and loss stop limits. You can also set things so that autoplay ends when you trigger the main bonus round.

The Jingle Bells: Power Reels RTP is 95.78% which is slightly below average. The volatility here is surprisingly high. This is a high variance slot. The most you can win from a single spin is 6,544 x your total stake. 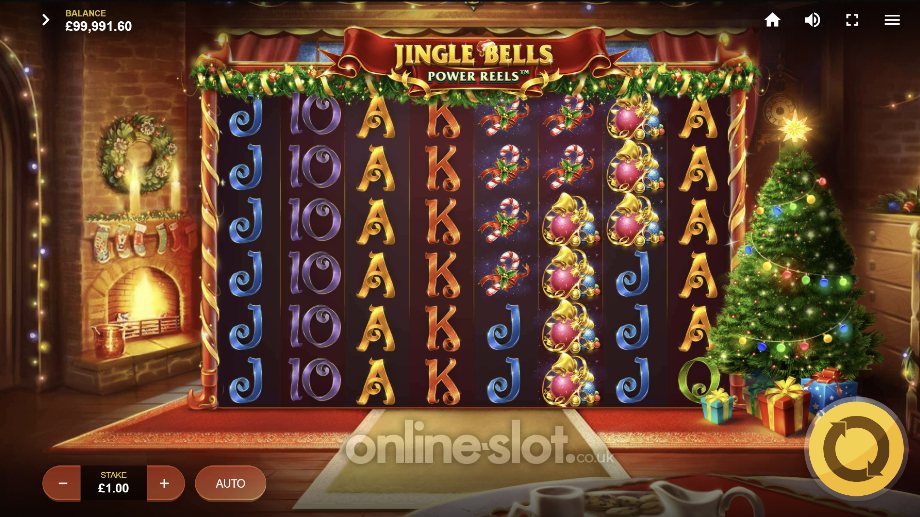 There’s a rather warm and cosy feel to the design in the Jingle Bells: Power Reels slot. With a Christmas theme, a lounge filled with decorations and a roaring fire is the setting here.

There’s a jangly soundtrack playing in the background which has just the right amount of festivity to it. It offers a hint of Christmas without being too over the top. Overall, the rather comforting, reassuring design is nicely done.

On the reels you’ll find colourful lower value royals and a collection of symbols with a more festive feel. They include candy canes, stockings, baubles and stars. The bells symbol is the most lucrative, paying 12.5 x stake if you land 8 across a payline.

Potentially even more rewarding is the gift box wild. This replaces all the standard symbols and pays 25 x your total stake for an 8-on-a-line combo.

Even though there are 48 symbols appearing on each spin, the design is still strong enough to keep things nice clear in the Jingle Bell: Power Reels mobile slot. The gameplay offers variety but is still simple enough to make smartphone play very straightforward.

Many Christmas-themed slots are aimed at casual players and are relatively simple as far as gameplay is concerned. It was a slight surprise to find just how much was going on in Jingle Bell: Power Reels. There’s a decent selection of modifiers as well as a free spins round where those modifiers can also strike.

On any spin, you could see an animated Santa appear. He really puts his back into pushing a colossal 6×5 wild symbol onto the reels. Known as the Mega Wild feature, you’re guaranteed to create a winning combination whenever this giant wild appears.

Santa can appear at random and give the Christmas tree to the side of the reels a shake. In the process, he’ll deliver a multiplier which is applied to your next win.

When the Raining Wilds feature triggers (at random, like the others), Santa tiptoes his way across the screen, throwing Christmas presents as he does so. These gifts land as 1×1 or 2×2 wilds. You’re guaranteed to land winning combination here.

In the Winning Reels feature, Santa magically removes all the lower paying royal symbols from the reels. You’re then guaranteed to land a winning combination made up of the more rewarding symbols. 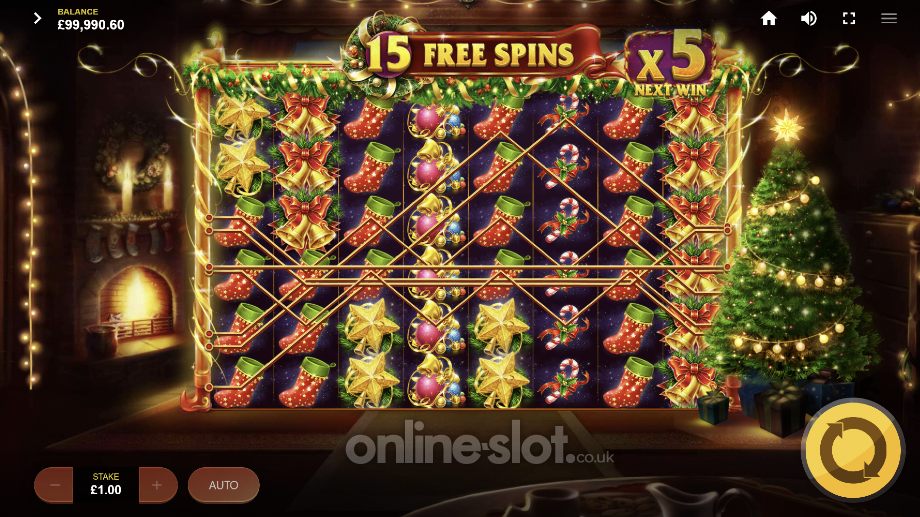 Land 3 snow globe scatters on the same spin to trigger the Free Spins feature. Your reward here is 8 free spins. Three more free spins are added to your total for each extra snow globe that lands.

Retriggers are possible too. Land 3 snow globes and you’ll play an extra 5 free spins. Once again, 3 more are added on top for each snow globe more than 3 that you hit.

You can also trigger the feature at random if you get lucky with 1 of Santa’s Random Acts of Generosity.  When the free spins are active, it’s also still possible to land the 4 modifier extras meaning multipliers, 2×2 wilds, Mega Wilds and only high value symbols on the reels.

I rather liked the Jingle Bells: Power Reels slot. The design is rather tasteful for a Christmas-themed slot and there’s plenty of variety on offer from Santa’s modifiers. The free spins round isn’t bad either as the modifiers can strike here too.

The key to winning big is from the Christmas Tree Multiplier feature which can give you multipliers in both the base game and in the Free Spins feature. Take care though. This is a surprisingly volatile slot given the theme. The Jingle Bells: Power Reels variance is very high.

If you fancy some high variance festive action this Christmas, Santa and his Jingle Bell Power Reels could be just what you’re hoping for. Other Christmas titles include Christmas Carol Megaways by Pragmatic Play and Rudolph Gone Wild from NextGen Gaming.

What is the Jingle Bells: Power Reels RTP?

The Jingle Bells: Power Reels return to player rate is 95.78% which is slightly below average. Highly volatile, most wins will come from the plethora of bonus features.

What is the Jingle Bells: Power Reels max win?

The maximum win per spin is 6,544 x your total stake from a single spin. The key to winning big is from the multipliers which can appear in the base game or free spins, randomly.

Is there a Jingle Bells: Power Reels free spins feature?

Is there a Jingle Bells: Power Reels mobile slot?

Yes, you can join Santa on all devices including desktop, tablet and iOS and Android smartphone. You can also try this game for free here at Online-Slot.co.uk on any compatible device.