Try and land riches fit for a Russian royal in the Golden Tsar slot, a 5 reel, 30 payline title from Red Tiger Gaming. Land winning combinations to fill the progress meter for any of the 4 higher paying royals and that symbol transforms into a 1x4 Super Symbol. The main feature is the Tsar Spins feature which awards 12 free spins. During the feature, all 4 members of the royal household can turn into an expanding symbol and fill the reels whenever it lands. Lavishly designed and highly volatile, find out more about this Romanov-inspired slot in our detailed Golden Tsar review.

Where to Play Golden Tsar Slot

The Golden Tsar slot is played with 6 reels, 4 rows and 30 paylines. To create a winning combination, land 2 or more of the higher value royal family symbols, or 3 or more of the lower value Russian letters on a payline on adjoining reels, starting from reel 1.

You can enter the imperial palace at stake levels of between 10p and £40 per spin. Click on the stake button in the bottom left-hand corner of the screen and then pick your level. The Auto button does exactly what it says on the tin. Click on this and you can run up to 100 autospins. There are options for win, loss and stop on feature limits. It’s very straightforward to use.

The Golden Tsar RTP is a little on the low side at 95.77% but it’s not a terrible figure. What is high is the variance. This is a volatile slot. The maximum win stands at 1,936 x your total stake from a single spin. 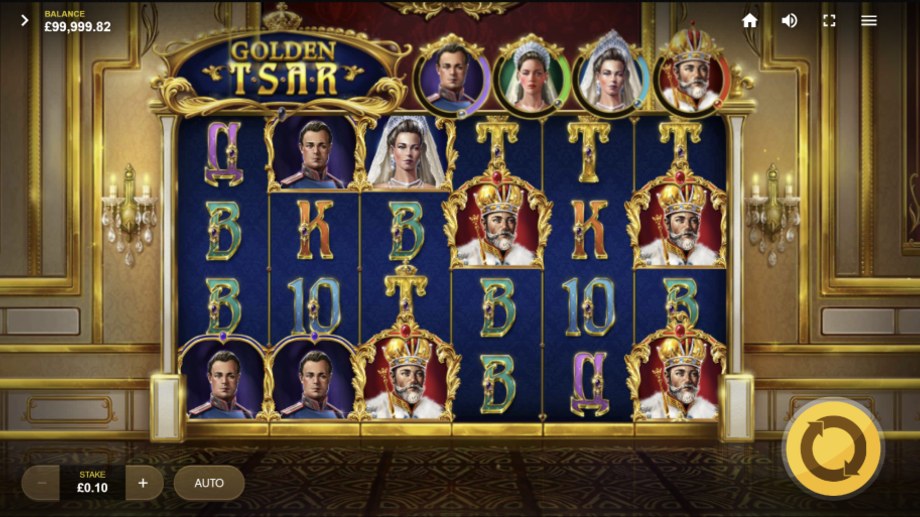 The ballroom of a Russian palace is the setting for the Golden Tsar slot. It could come straight out of an adaptation of Anna Karenina or War and Peace. Set against a gilt-edged gold wall and flanked by candles and chandeliers, there’s a lavish feel to the design here. There’s an orchestral score playing in the background while you spin which is as tasteful and classy as the visuals.

On the deep blue reels, you’ll see lower value Russian letter symbols. They’re joined by 4 members of the royal family. In order of value are the Tsezarevich, Tsarevna, Tsarina and the Tsar himself. Sporting an impressive gold crown, the Tsar pays 0.2, 1.5, 3, 7.5 or 25 x your total stake if you land 2, 3, 4, 5 or 6 on a payline. They don’t sound like enormous numbers but there are stacked symbols to consider which can quickly get things moving.

Like most slots in the Red Tiger Gaming portfolio, you can play Golden Tsar on all manner of devices including computers, tablets, smart TV and Apple iOS and Android mobile phones. The lavish design is nice and sharp, even on the smaller screen devices. You’ll get the same volatile gameplay on all devices too.

The design in Golden Tsar might be lavish and ornate but that’s not really the case with the gameplay. Red Tiger Gaming has kept things relatively simple of the features front. There are a couple of extras that keep things interesting though.

Each time you land a winning combination that’s made up of 1 of the 4 members of the Russian royal family, you’ll fill up part of their meter above the reels. The more symbols in the win, the more the meter progresses. When a Royal meter is full, you’ll activate the Royal Expand feature.

That member of the royal family turn into a 1×4 Super Symbol. These symbols pay anywhere on the same payline. They don’t have to be on adjacent reels like they do for a standard win.

All standard wins are paid first, the expansion then takes place and the newly formed winning combination are then paid. If you fill 2 meters on the same spin, they play out in turn. 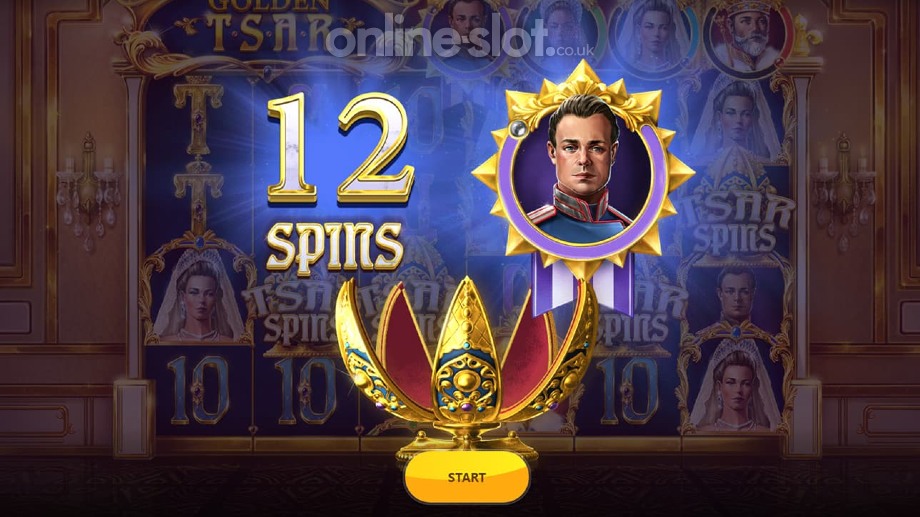 The main extra is the Tsar Spins feature. It’s triggered by landing 3 or more Faberge-style scatter eggs anywhere on the reels. You’ll then receive 12 free spins.

Before they start, the meter of 1 of the 4 members of the royal family will be filled. This symbol will expand whenever it appears during the feature.

Landing winning combinations made up of other members of the royal family will fill their meter just like in the base game. When a new meter is filled, this symbol will turn into a special expanding symbol for any free spins you have left. It will also add another 5 free spins to your total. This can lead to 15 extra free spins in total.

This trip back in time to imperial Russia is very nicely crafted. The sound and visuals are terrific. The gameplay isn’t the most varied you’ll come across but the expanding symbols in the base game can really get things moving.

It’s the free spins that things can really start to motor though if you get multiple expanding symbols. Take care though, as the Golden Tsar slot variance is extremely high. With its unusual subject matter, lavish visuals and volatile gameplay, this audience with the Golden Tsar has plenty to offer.

If you like symbols that expand, the Lord of the Ocean Magic slot by Novomatic offers this in the Free Games feature. It also offers payouts of up to 5,000 x stake per free spin.

What is the Golden Tsar RTP?

The Golden Tsar return to player rate is 95.77%. That’s a little lower than the 96% slot average but not terrible. It is highly volatile though so don’t expect big wins often.

What is the Golden Tsar max win?

The Golden Tsar maximum win is 1,936 x your total stake from a single spin. Your chances increase in the Tsar Spins feature due to the potential for multiple expanding symbols.

Is there a Golden Tsar free spins feature?

Yes, trigger the Tsar Spins feature by landing 3+ Faberge-style eggs on the same spin. You’ll get 12 free spins with 1 of the high value symbols expanding. Fill meters and you will play with more royal expanding symbols and extra free spins.

How does the Royal Expand feature work?

The Royal Expand feature is played when you fill a Royal meter (by winning with a Royal symbol). That royal that becomes a 1×4 Super Symbol that pays scatter style (not on adjacent reels). In the free spins, all 4 royals can expand.