Maximum prizes of up to 10,366 x stake are up for grabs in the Dragon’s Fire slot, a 5 reel, 40 payline game from Red Tiger Gaming. Central to the action here are Dragon’s Egg multipliers which trigger following each winning spin. Land a winner immediately after and that multiplier increases in size, up to a maximum of 50x. The Dragon’s Eye Boost can trigger randomly to increase the multiplier by up to 10x. Look out for the Dragon who can breathe fire onto the reels to add stacked wilds or trigger the free spins. This epic fantasy has spawned Megaways and Infinireels versions. Find out how the original stacks up in our Dragon’s Fire review.

Where to Play Dragon’s Fire Slot

The Dragon’s Fire slot is played on 5 reels, 4 rows and 40 paylines. Create winners by landing 3 or more matching symbols or wilds on a payline from left to right, starting from reel 1. You’ll only need 2 of the most lucrative Dragon’s Eye symbols to form a winner.

You can play at stake levels that range from 20p to £10 per spin. Click on the stake tab below the reels and choose a level you’re comfortable with. Red Tiger Gaming’s usual autoplay options are available here. You can run 10 to 100 spins without having to press the spin button. You can also set win, loss and stop on feature limits if required.

The Dragon’s Fire RTP is 96.07%. We found the volatility here to be high. Don’t expect to win too often. The big multipliers mean it’s possible to land a biggie quickly though. It’s a high risk, high reward slot. The max win is 10,336 x your total stake from a single spin. 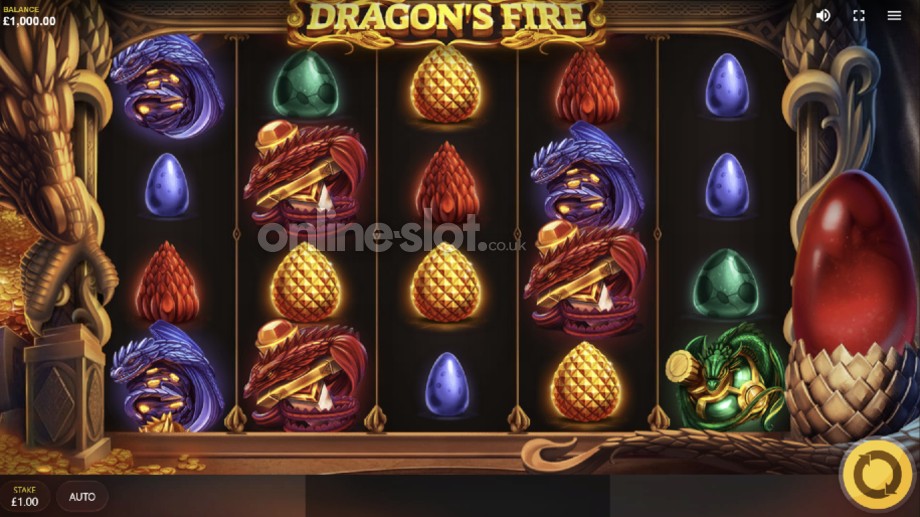 The design in the Dragon’s Luck slot is impressively done. With a dragon fantasy theme, it’s 1 of the best designed games you’ll come across. There’s a brooding, rather menacing soundtrack playing while you spin. It’s a good fit for this theme.

The reels are made up of 4 brightly coloured dragon eggs and 4 more rewarding fully formed dragons. The best symbol is the Dragon’s Eye which awards 0.1, 0.8, 2 or 5 x your total stake if you land 2, 3, 4 or 5 across a payline. Those 3, 4 and 5 symbol payout amounts are also on offer from the wild. This can land on all 5 reels and substitute for all the standard symbols. The wild can also land fully stacked if the animated dragon stirs into life.

You can enter the dragon’s lair on all types of devices including computers, tablets and mobiles. The colourful imagery is sharply done and easy to follow on the smaller screens. The gameplay is simple too which makes the Dragon’s Fire mobile slot very straightforward to play.

There’s a very decent variety of extras to get stuck into in Dragon’s Fire as there are 4 bonus features. You start with multipliers which arrive following a winning spin and increase with each subsequent spin. Other goodies include multipliers boosts, stacked wild reels and a free spins feature. 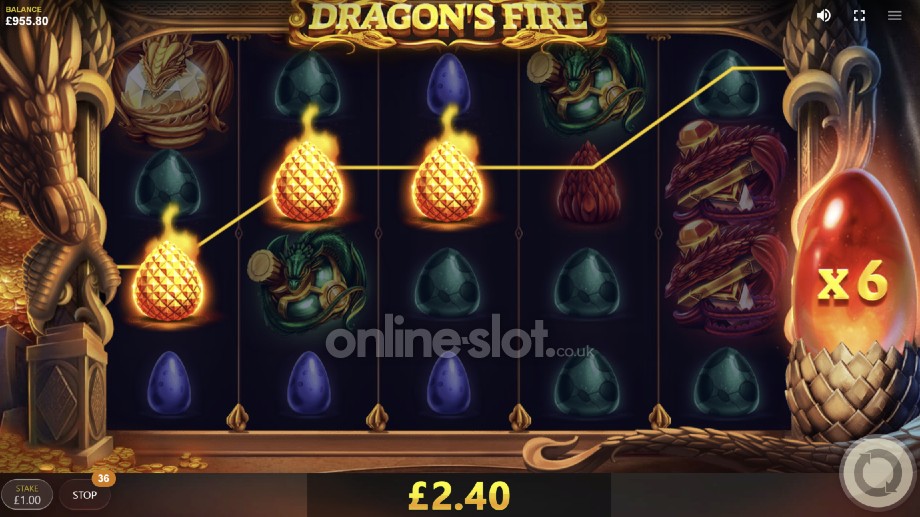 The Dragon’s Eye Boost feature can trigger randomly on any spin and increase the value of your current multiplier by up to 10x.

On any spin, an animated dragon can fly onto the screen and breathe fire onto the reels. Known as the Fire Blast feature, the fire breath can turn whole reels wild or it can trigger the free spins. The dragon does remind me of the dragon from Shrek though. 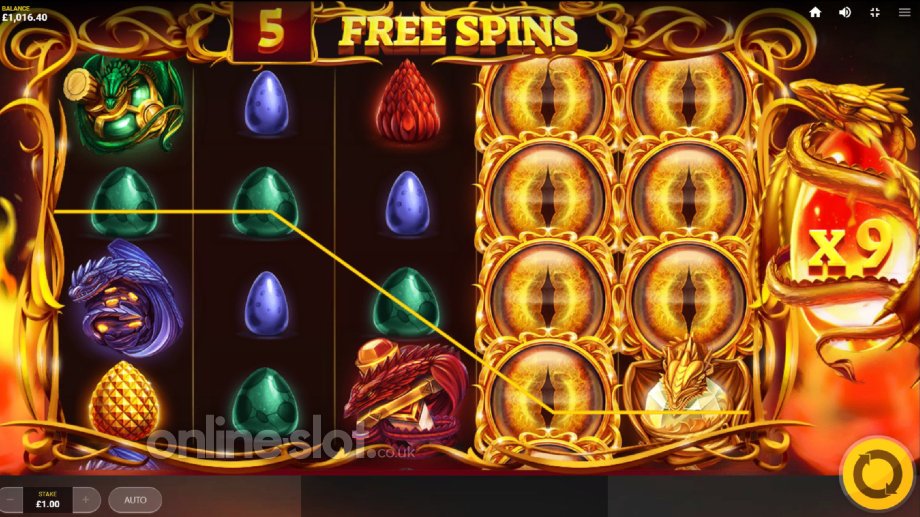 As well as via the Fire Blast feature, you can also activate the Free Spins feature by landing 3 scatter symbols on the same spin. Pick one of the eggs which will reveal how many free spins you’ve been awarded. Landing 3 scatters during the feature will see you pick more eggs for additional free spins (with no limits).

If you had a multiplier active on the triggering spin, it’s carried over into the free spins. Like in the base game, the expanding Dragon’s Egg Multipliers are active during the free spins.

In fact, the multipliers are potentially even more rewarding than in the base game as the multipliers don’t reset following a winless free spin. Instead, they keep on rising throughout the feature with each winning combination that hits.

The final multiplier amount from the free spins carries back over to your first spin in standard mode. It continues to rise until you land an unsuccessful spin. Only then does it go back to 1x.

It might not have the flashy game engines like its Megaways and Infinireels versions but the original Dragon’s Fire slot stacks up pretty well. In fact, I’d go as far as to say it’s my favourite of all the slots in this series.

Yes it’s simple but it’s superbly designed and comes with some cracking extras. The key to winning big is from the Dragon Egg Multipliers which can reach 50x. Your chances of winning big increase in the free spins as the multiplier can only increase.

What is the Dragon’s Fire RTP?

The Dragon’s Fire RTP rate is 96.07%. Very high variance, it will give you wins fairly frequently but of the smaller kind. Expect the bigger pays from the multipliers.

What is the Dragon’s Fire max win?

This volatile epic fantasy can pay out up to 10,336 x your total stake on each spin or free spin. The key is from the multipliers which can reach 50x.

How does the Dragon’s Egg Multiplier feature work?

Land a winning combination to bring the Dragon’s Egg Multiplier feature into play. Each consecutive win increases the size of the multiplier up to 50x. On any spin, a Dragon’s Eye Boost can up the multiplier by up to 10x.

Are there any Dragon’s Fire free spins?

Yes, the Free Spins feature sees you choose from the dragon eggs to see how many free spins you’ll play. Multipliers are carried over and can increase up to 50x. Those multipliers don’t reset following a winless free spin either.