Enter the lair of a mighty fire-breathing creature in the Dragon’s Fire InfiniReels slot. The action here starts on a 3x3 game engine but the InfiniReels engine means that more reels are added as long as you create a new winning combination. Also boosting your winning chances here are Fire Egg symbols which deliver multiplier boosts. You could also benefit from Fire Wilds which can appear at random on any spin. The Dragon Spins feature can award unlimited free spins. Only 1 randomly chosen symbol pays during this. If it’s a high value symbol, look out. Discover more about this fiery fantasy-themed slot in our full Dragon’s Fire InfiniReels review.

This Dragon’s Fire InfiniReels slot is played using the InfiniReels game engine. Each spin starts on a 3 reel, 3 row machine. Land matching symbols or wilds on all 3 reels and they lock in place and a new reel is added.

With each new reel, the number of ways multiplies by 3. Here’s how many ways to win you can get for up to 8 reels:

As the name suggests, there’s no limit to how far the reels can expand. In theory, they could stretch into infinity. If you don’t land a new matching symbol or wild, the reels go back to their original 3×3 set up and a new spin follows.

You can play at stake levels of between 10p and £10 per spin. Click on the Stake tab in the bottom left-hand corner of the screen and choose your stake level. Next to that is the Auto tab which lets you set 20, 50 or 100 autospins. There are options to set win and loss limits here. There’s also a stop on feature facility.

The Dragon’s Fire InfiniReels RTP is 95.74% which is slightly below the 96% average. With frequent wins, this game is a highly volatile one. As a result, the max win per spin is 10,414 x your total stake. 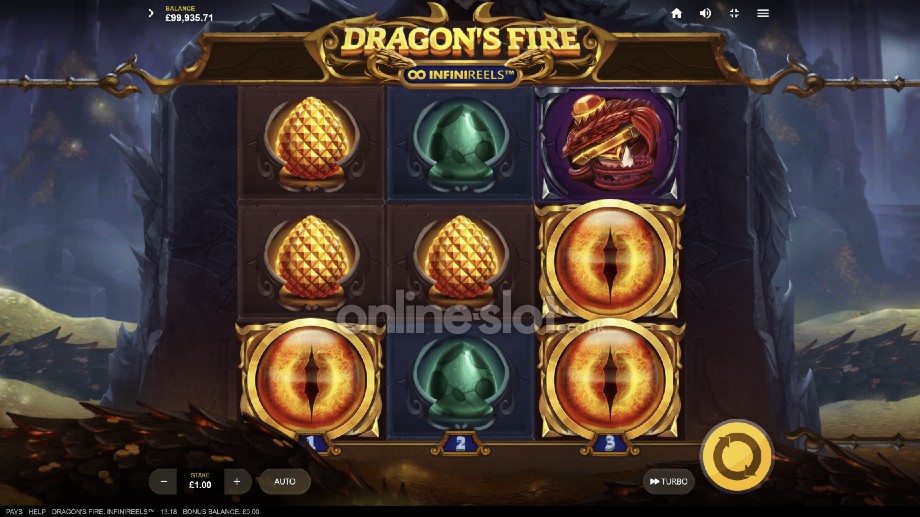 The Dragon’s Fire InfiniReels slot has a dragon fantasy theme and is inspired by the 2018 Dragon’s Fire slot which has proved 1 of Red Tiger Gaming’s most popular games.

Intense and superbly designed, a rather dingy looking lair, filled with gold and treasure forms the backdrop to the action here. There’s a sweeping orchestral soundtrack playing in the background while you spin. Combined with the rather impressive imagery, it gives a rather epic and Game of Thrones feel.

On the reels you’ll find 4 lower value dragon egg symbols. They’re joined by a quartet of dragons. The golden dragon’s eye is the most rewarding symbol. Land a winning 3-symbol combination and it pays 1 x your total stake. There are also Fire Wilds, Dragon Eggs and a logo symbol, which is the game’s scatter. Land 3 of these to trigger the feature round.

You can play Dragon’s Fire InfiniReels on smartphones, tablets and desktop and laptop computers. Flip your mobile into landscape mode and the InfiniReels game engine works just fine if you’re using a small screen devices.

This fantasy-themed slot is all about the InfiniReels game engine which can add reel after reel if you manage to get on a roll. There are also random wild and multiplier extras a well as a free spins feature to further ramp up the action.

The Fire Egg symbol can appear at random on any spin. Whenever it hits, the Fire Egg feature applies. The Fire Egg delivers a multiplier which is applied to all current wins. If a new Fire Egg lands when one is already active, the value of the multipliers is combined to give an even bigger payout boost. When the reels reset, the multipliers do too.

On any spin, you could see 1 or 2 reels combust, and in the process, reveal a Fire Wild. Known as the Fire Wilds feature, these Fire Wild symbols substitute for everything apart from the scatter symbol.

The Dragon Spins feature is triggered by landing 3 Dragon Spins scatter symbols on the same spin. Your reward here is 8 free spins. Before the feature starts, 1 symbol is chosen at random.

The chosen symbol will be the only standard symbol active alongside the Fire Wilds, Fire Eggs and +2 symbols. If the +2 symbol lands, you’ll see 2 extra free spins added to your tally.

What you make of the Dragon’s Fire InfiniReels slot will largely come down to your thoughts on the InfiniReels game engine. It can be a frustrating proposition when you land a winner but fail to bring the extra reels into play. When you bring extra reels into play, it can be worth the wait, especially if you manage to land the Fire Egg multiplier.

The key to big wins is to get successive wins with Fire Egg multipliers. Your chances increase in the Dragon Spins feature due to less symbols appearing on the reels. This game is something of an acquired taste though. It is different and the mechanic will take some getting used to.

The max win of 10,414 x stake is decent too. However, the Dragon’s Luck Megaways slot also uses another popular mechanic and offers slightly larger max wins of 10,470 x stake.

What is the Dragon’s Fire InfiniReels RTP?

The Dragon’s Fire InfiniReels return to player rate is 95.74% which is just below the average. Highly volatile, you’ll get plenty of wins due to the InfiniReels mechanic.

What is the Dragon’s Fire InfiniReels max win?

The maximum win from a single spin is 10,414 x your total stake. The key to winning big is to get plenty of successive wins which brings extra reels and Fire Egg multipliers into play.

InfiniReels is a game mechanic. Land 3 matching symbols on all 3 reels and a new reel is added. If a new matching symbol lands, it adds to the payout and also brings another reel into play. The extra reels keep on coming as long as you improve on your winning combination.

Are there any Dragon’s Fire InfiniReels free spins?

Yes, the Dragon Spins feature begins with 8 free spins. Only 1 standard symbol is in play alongside Fire Wilds, Fire Eggs and +2 symbols. If it’s a high value symbol, the awards can quickly build. You can win unlimited free spins too.