Join a sheriff trying to bring a band of wild west bandits to justice in the Bounty Raid slot. Created by Red Tiger Gaming, it’s a medium volatility, 5 reel, 10 payline game. The features here are a little unusual. Land a sheriff symbols and you’ll collect all the payouts that are attached to each of the bandits. Land the Bounty Hunter and you’ll trigger a lock and spin respin feature where the bandits and gold coins can deliver rich rewards. Did this sharp-shooting western hit the target? Find out in our detailed Bounty Raid review. You can play right away at the best Bounty Raid casinos below.

Where to Play Bounty Raid Slot

The Bounty Raid action takes place on a very simple 5 reel, 3 row machine which offers 10 paylines. Standard winning combinations are formed by landing 3 or more matching symbols in one of those paylines, on consecutive reels, starting from reel 1.

You can join the sheriff, bandits and bounty hunters at stakes that range from between 10p and £100 per spin. Click on the Auto button below the reels to set up autospins. You can line up to 100 games in succession complete with loss and a feature stop limits. There’s also a turbo mode if you want to quicken the pace.

Any RTP below 96% is a little disappointing and the Bounty Raid of 95.71% RTP is a little on the skinny side. This wild west adventure isn’t massively volatile either. The Bounty Raid variance is in the medium range, offering a balanced range of payouts. The maximum potential payout here stands at 1,022x your total stake.

On first view, the Bounty Raid slot game looks like a pretty standard western-themed slot. The gameplay is a bit different though and serves up some unusual and potentially exciting extras.

Central to much of the bonus action in Bounty Raid are the 5 bandit symbols. These each come with a prize value attached. This can change with each spin. The most lucrative is the bandit with the white beard which can award up to 50 x your total stake. The bandit payouts become active then you trigger either of the game’s 2 features.

This streak respin round is triggered by landing the buxom female bounty hunter on the middle reel. Any bandit symbols that are on show on that spin are locked in place and a respin is awarded on a new set of reels.

When you have a respin where no new bandit or coin lands, the round comes to an end. The value of all the locked bandits behind bars is added together to give you your overall prize.

The sheriff can land anywhere apart from the middle reel. When he makes an appearance, he collects the values from the all the bandit symbols on the reels on that spin. These are added together for your total payout. 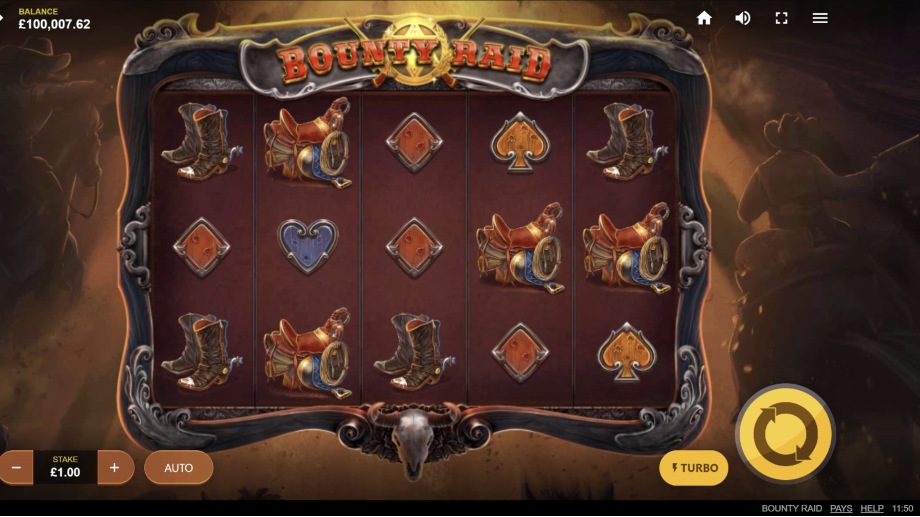 There’s a dusty Wild West look to the Bounty Raid slot. Browns and dark reds dominate the colour scheme. It’s all very nicely drawn but the symbols aren’t always the easiest to make out. The soundtrack impresses too. It really rocks out during the lock and respin feature.

You’ll see playing card suit symbols alongside cowboy boots, a Stetson, a saddle and pistols. The chest full of gold coins is the most rewarding symbol. It pays 20, 40 or 80 x your stake if you land 3, 4 or 5 across a payline.  The standard symbols are joined by the 5 bandits, the bounty hunter and the chisel-jawed sheriff. These are all superbly drawn.

Overall, the sound and visuals work pretty well. Red Tiger Gaming has created a Bounty Raid mobile slot. The imagery isn’t the sharpest on the smaller screen but it’s solid enough. The gameplay is easy to follow and ideal for mobile or tablet play.

You don’t see so many westerns on cinema screens these days. It remains a popular theme with slots developers and players though and Bounty Raid is a good example of why. The design here is solid enough but the features offer some pretty good action. The lock and respin round has plenty of potential for action, especially if the gold coins work their magic.

It might not be as volatile as some players would like but if you like slots that take you to the wild frontier then Bounty Raid is a game to consider. Other Wild West slots include Dead or Alive 2 by NetEnt and Deadwood by Nolimit City.

What is the Bounty Raid slot RTP?

The Bounty Raid return to player rate is 95.71% which is a little on the skinny side. Most slots released these days manage to get the RTP to nudge over the 96% mark so this is on the low side. It does have plenty of bonus features to compensate though.

What is the Bounty Raid max win?

The most you can win from the Bounty Raid slot game is 1,022 x your total stake. This will come in The Bounty Hunter feature where big cash prizes can be won. Being a medium variance slot, you’ll find a balance between frequency and size of payout.

Where can I play the Bounty Raid slot?

The Bounty Raid slot is available to play at all casinos with Red Tiger Gaming slots. That means you have an extensive choice of reputable casinos to choose from. Check out the best Red Tiger Gaming casinos in the UK.

What features does Bounty Raid have?

Look out for the sheriff symbol which collects the cash values attached to all the bandits on display on that spin. The Lock and Spin bonus is a classic streak respin round where the respins keep on coming as long as a new bandit or coin hits. See the Bounty Raid bonus features section for more details.