Mythical creatures can deliver some fiery action in the Ancients’ Blessing slot, an epic fantasy-themed game from Red Tiger Gaming. Played using a 5 reel, 30 payline machine, this relatively straightforward slot comes with a couple of potentially exciting extras. Land a winner made up of a high value creature symbol and they lock in place for the spin that follows. Successive wins bring an expanding multiplier into play. On any spin, all the lower value symbols can transform into high value creatures. On the spins that follow, only high value spins are in play. Discover more in our in-depth Ancients’ Blessing review.

Where to Play Ancients’ Blessing Slot

The Ancients’ Blessing slot is played on a 5 reel, 4 row, 30 payline machine. Winners are created in the usual manner for a paylines slot. Land 3, 4 or 5 matching symbols on a payline from left to right, starting from reel 1 and you’ll form a successful combination. That in turn can bring locked symbols into play, as you’ll discover below.

You can join the mythical creatures in this ancient epic at stake levels of between 10p and £40 per spin. Use the + and – tabs next to the stake button to adjust your bet size.

The Ancients’ Blessing RTP of 95.72% is slightly below average. Medium to high variance, the bigger wins will come from the bonus features. The maximum win here comes in at 2,175 x your total stake from a single spin. 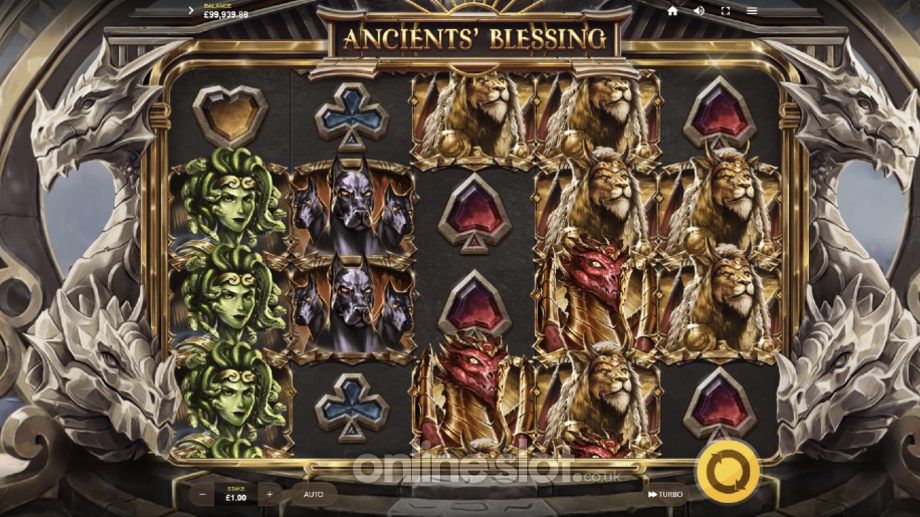 There’s an epic feel to the design in the Ancients’ Blessing slot. With a mythology theme, the reels are set alongside stone dragon statues which look as if they’re perched at the top of a mighty ancient castle.

You’ll hear a sweeping orchestral soundtrack playing while you spin. It’s a good fit for a slot with this theme and complements the imagery nicely.

On the reels are 4 lower value playing card suit symbols. They’re joined by 5 higher paying creature symbols. They include dragons, the three-headed dog Cerberus, a snake-haired Gorgon and a lion. The red dragon tops the bill as far as payouts go. Land 3, 4 or 5 of this fire-breathing creature in a line for a payout of 0.5, 1.5 or 2.5 x your total stake.

There’s no denying that all the symbols are very nicely drawn and packed full of detail. When the reels are filled with creature symbols it can all look a bit dark and it’s not the easiest to decipher what’s what.

Ancients’ Blessing is available to play on smartphones and tablets as well as computer. The simple gameplay, where locked symbols are central to the action, is well suited to mobile play. We found the dark visuals a little tricky when playing on a smaller screen device.

This myth and legend-themed Ancients’ Blessing isn’t overloaded with extras. The Locked Ancients feature is central to much of the best action, especially if you manage to get on a winning roll and bring the expanding multiplier into play. The other extra transforms lower value symbols into more valuable ones. 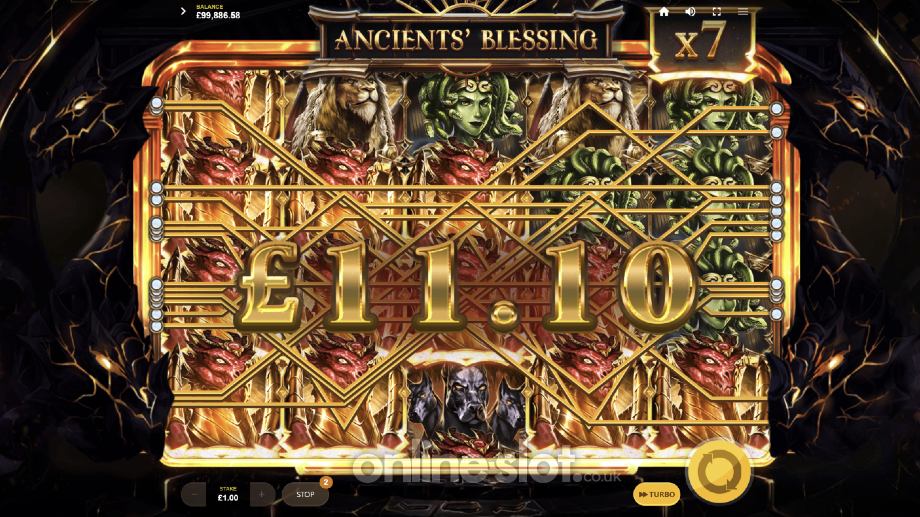 A spin then follows made up of higher value symbols only. The high value spins keep on coming until there’s one where no winner is formed. The reels then revert to their standard state and are made up of a combination of both low and high value symbols.

The gameplay in Ancients’ Blessing slot is pretty simple. The locked symbols come along regularly enough so there’s no shortage of action here, especially if you get on a decent run with the expanding multiplier. That’s certainly the case with the high value symbols spins.

As far as design goes, all the individual symbols are perfectly well done. They can all look a little dark when viewed together though. The rather repetitive gameplay won’t be for everyone but if you like that sort of thing, you should try the Starburst slot from NetEnt which is the most popular game around.

If you like dragons, the Dragon’s Fire slot by Red Tiger Gaming is a much better offering and comes with 10,336 x stake wins on each spin.

What is the Ancients’ Blessing RTP?

The Ancients’ Blessing RTP rate is 95.72%. Lower than the 96% average, this medium to high variance game will see most wins from the bonus features.

What is the Ancients’ Blessing max win?

This fantasy themed game can pay up to 2,175 x your total stake per spin. The key to winning big is from the increasing multiplier from 1 of the features.

What is the Locked Ancients feature?

The Locked Ancients feature is played when get a win with a high value creature symbol. Those symbols are locked in place for the next spin. Land a new winner and the process is repeated. Each successive win also boosts a multiplier by 1.

What is the Ancient Supremacy feature?

The Ancient Supremacy feature can trigger randomly on any winless spin. All the lower value symbols are removed with only high value symbols in play on the spin that follows. This boosts your chances of triggering the Locked Ancients feature.