The star of the famous series of folk tales enjoyed a first slots outing with Red Tiger Gaming earlier in 2020 and now he’s back for more adventures, this time with the Megaways game mechanic. The Ali Baba’s Luck Megaways slot has many of the elements of the original game including expanding symbols that are created following every winning spin. There’s also a free spins round where expanding symbols are active throughout. The big difference of course is the game engine. Instead of playing with 10 paylines active, you’ll instead play on reels that offer up to 15,625 ways to win. Find out what else is new in our detailed Ali Baba’s Luck Megaways review.

This Ali Baba’s Luck Megaways slot is played using the Megaways mechanic. The action plays out on a 6 reel machine. Each reel can comprise between 2 and 5 symbols. The more symbols, the more Megaways. If all 6 reels have the full complement of symbols, you’ll have 15,625 Megaways active.

You can play at stake levels that start at 20p per spin and rise to a maximum of £4 per spin. Just click on the Stake button and pick your level. Click on the Auto button and you can run 20, 50 or 100 autospins. Loss limits are required. You can also end the spins when you trigger the free spins round. 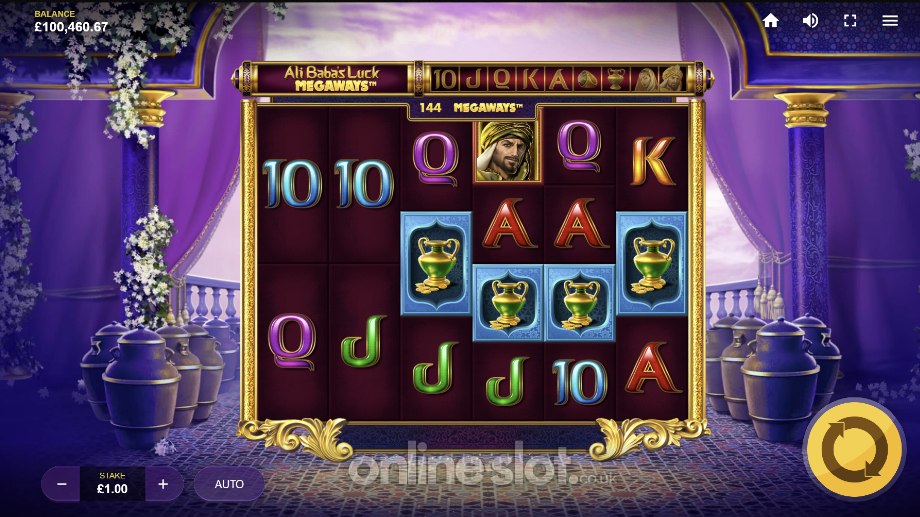 The design from the first Ali Baba’s Luck slot is largely intact in this Megaways version. The setting is a purple-tinged Arabian palace. There’s a comic book aesthetic to the imagery which is nicely done. As is the soaring Arabian-style soundtrack. There’s no shortage of atmosphere here. This is a nicely designed game.

Symbols on display include A to 10 royals, a gem-encrusted gold ring and a green and gold pot. The most rewarding symbols are the 2 characters. There’s the beautiful Morgiana who offers 8 x your total stake if you land 6 on adjoining reels and Ali Baba who pays 25 x stake if you land 6 in combination.

In the Ali Baba’s Luck Megaways slot, expanding symbols and free spins are the 2 main bonus elements on offer. It’s pretty much standard for a Megaways game.

Unlike standard symbols, gold symbols don’t have to be next to each other to create a winner. For example, landing matching gold symbols on reels 1, 3, 4 and 6 would result in a 4-of-a-kind win. You can see which symbols are the live expanding symbols in the meter above the reels. 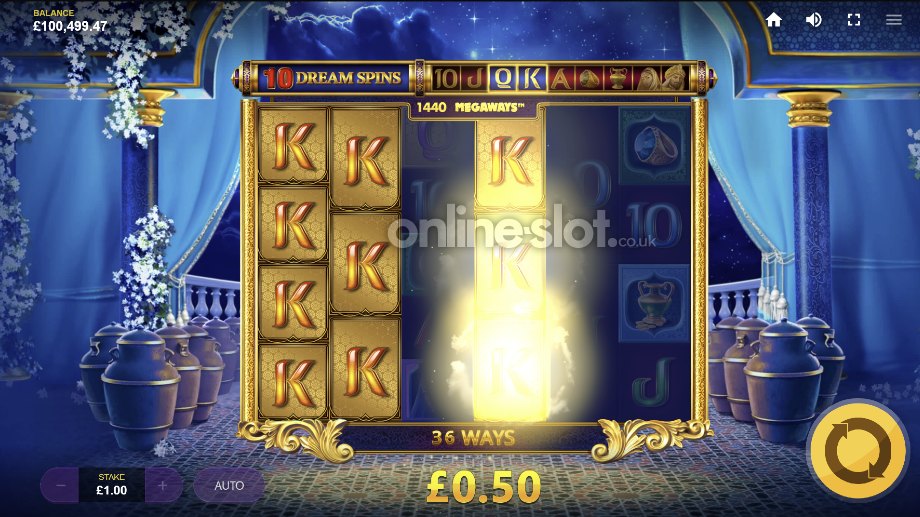 The purple treasure chest is the bonus symbol. Land 3 of these anywhere on the reels on the same spin and you’ll activate the Lucky Round feature.

You’ll then get to spin a bonus wheel which determines how many free spins you’ll receive in the Dream Spins feature. Extra treasure chests on the triggering spin add an extra 4, 8 or 12 free spins to your total on top of what’s awarded from the wheel.

Finally, landing 3 or more Treasure Chest bonus symbols results in a retrigger and another round of free spins.

At first glance, there’s not much difference between Ali Baba’s Luck Megaways and the Leprechaun’s Magic Megaways slot. The RTP and max win is slightly here in this version though.

Comparing to the original Ali Baba’s Luck slot, the RTP is slightly better and the potential maximum win has risen from 5,000 x to over 20,366 x stake. The volatility is really ramped up in the Megaways version too.

If you like Red Tiger’s original Arabian adventure but fancy playing something a little more fiery, the Ali Baba’s Luck Megaways slot should appeal.  However, there are much better Megaways slots available.

What is the Ali Baba’s Luck Megaways RTP?

What is the Ali Baba’s Luck Megaways max win?

The most you can win from a single spin is 20,336 x your total stake. However, this outing for Ali Baba is a high variance one. The key to big wins is from the expanding symbols in the free spins.

Are there any Ali Baba’s Luck Megaways free spins?

How does the Expanding Symbols feature work?

Any win activates the Expanding Symbols feature. The winning symbols become gold on your next spin. These then connect to other gold symbols to give you scatter style payouts.