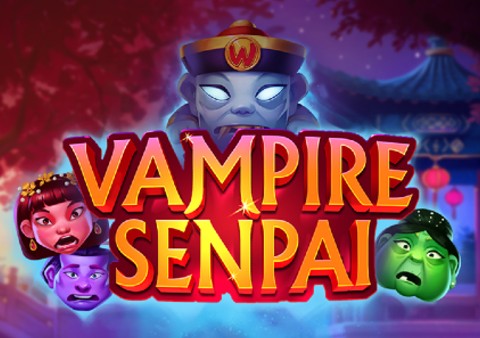 The Vampire Senpai slot is brought to you by Quickspin and has 5 reels and 40 paylines. Playable from 10p a spin on all devices, it’s inspired by Chinese folklore. The game comes with Vampire Wilds that convert surrounding symbols into wilds which can lead to even more wilds.

With mystery Talisman wilds appearing randomly, there’s a free spins feature where vampire wilds remain on the reels and hop randomly on each free spin. With Talisman wilds also locked, you can win extra free spins. It comes with an RTP of 96.19% and max wins of 8,894.3 x stake. Whisk yourself away to a world filled with hopping vampires in our Vampire Senpai review.

Where to Play Vampire Senpai Slot

The Vampire Senpai slot is played on a 5×5 grid with 40 fixed paylines. A win is created when matching symbols land in succession from the leftmost reel (reel 1) and left to right.

The minimum stake is 10p per spin rising up to £100 a spin. With a Turbo mode available, you can opt for the Autoplay function where you can select up to 1,000 autospins. In the Advanced tab, you can set a loss limit and single win limit.

Vampire Senpai is a medium to high variance slot with Quickspin rating it as 3.5 out of 5. With over half of the winning combinations coming in the base game, the RTP is 96.19%. It’s in the bonus features where the big wins will come from due to locking/hopping wilds. The max win is 8,894.3 x stake per spin or free spin which is high.

The Vampire Senpai slot focuses on wild symbols. There’s a vampire wild which turns other symbols wild as well as mystery Talisman wilds which can appear in the base game. It gets better in the free spins feature as vampire wilds hop around on each free spin and Talisman wilds are locked. Both give you more free spins too. Let’s dive in.

Randomly in the base game, between 3 and 9 Talisman wilds can appear on reels 1, 2, 3 and/or 4. These substitutes for regular symbols to help you form winning combinations. This is called the Talisman Mystery Wilds feature.

Vampire Senpai focuses on the Reanimated Free Spins Bonus feature. This is triggered by landing 3 or more bell bonus scatter symbols on the reels. The more you see, the more free spins you begin with:

When a vampire wild symbol lands, it remains on the reels for the duration of the feature. However it will ‘hop’ to a random position at the start of every free spin.

Talisman wilds can also appear during the free spins. This time though, they lock in position for the duration of the feature. More importantly the value of wilds increases when you get 5 in combination. It will pay 40 x stake as opposed to 20 x stake in the base game. Finally, any vampire or talisman wild landing will add an extra free spin to your tally. 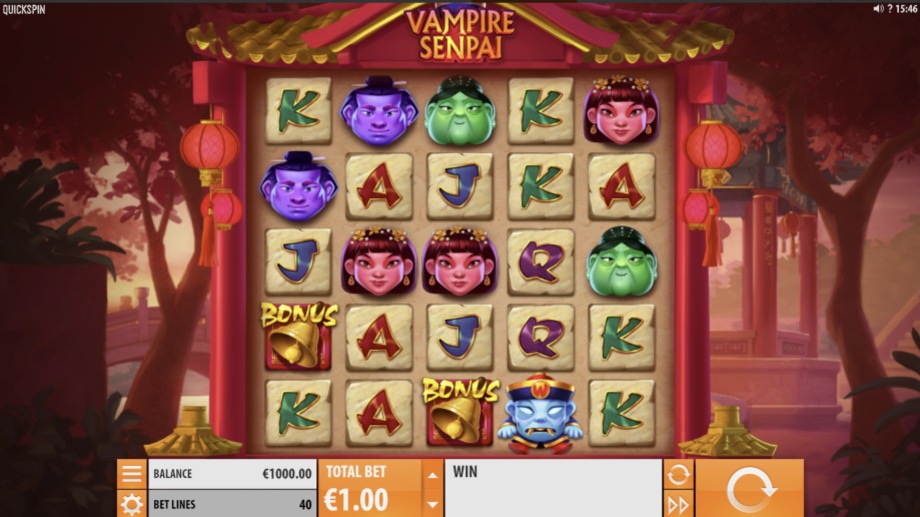 The Vampire Senpai slot is inspired by Chinese folklore. With a comedic tone to the visuals, it’s set in a world filled with hopping vampires. It is based on undead creatures known as the Jiangshi which is a zombie-like vampire.  With a traditional temple encasing the 5×5 grid, it has a traditional soundtrack playing.

Symbols include low value and stylised A, K, Q and J royals. You will also see 3 human character symbols which are the medium value ones. The reddish human is the highest value symbol paying 1, 2.5 or 10 x stake for 3, 4 or 5 across a payline.

The Jiangshi symbol is the wild symbol which substitutes for all symbols mentioned above – 3, 4 or 5 pay 1, 2.5 or 20 x stake. Vampire and Talisman wilds can also appear in the base game and free spins.

Beautifully design, the game has rich graphics and eye-catching effects. This works rather well on the Vampire Senpai mobile slot as well as tablet and desktop versions.

Vampire Senpai is visually superb. They’ve taken the Chinese theme and added a unique and appealing twist which will appeal to many. Light-hearted in nature, the potential for big wins is evident in the Reanimated Free Spins Bonus feature as you will benefit from hopping and locked wilds.

With potential payouts of 8,894.3 x stake per spin, Vampire Senpai is one of Quickspin’s better slots recently and one that will surely prove popular. Just hope to vampire wilds are thirsty for blood and turn the human character symbols into added wilds.

Thirsty for more vampires? The Blood Suckers 2 slot by NetEnt and iconic Immortal Romance from Microgaming are two of the most popular online slots ever.

What is the Vampire Senpai RTP?

The Vampire Senpai RTP is 96.19%. Over 50% of wins will come in the base game and 12.8% coming in the random wilds feature. 31.1% of wins come from the free spins where you’ll benefit from hopping and locked wild symbols.

What is the Vampire Senpai max win?

Where can I play the Vampire Senpai slot?

There are many reputable online casinos offering Quickspin slots meaning you’ll have a wide choice of options to play this game. Take a look at the best Vampire Senpai casinos which and most trusted and best for UK players.

Is there a Vampire Senpai mobile slot?

Yes. Quickspin produce all slots so they can be enjoyed on mobile, tablet and desktop devices. The colourful and eye-catching graphics and animations work very well on smartphone screens.