Hope to unleash an eruption of coins in the Hammer of Vulcan slot, a hugely volatile 6 reel, 4,096 ways to win game from Quickspin. Featuring the developer’s usual high-class design, the ancient God of Fire can deliver some fiery extras. On any spin, the Hammer Strike feature can award stacks of wilds. Land a Hammer Strike during the Light the Forge Free Spins feature and it increases a multiplier by 1. If you don’t land a winner on your final free spin, you’ll benefit from the Strike Again feature. This awards extra free spins until a winner is created. See what else this volcano has to offer in our detailed Hammer of Vulcan review.

Where to Play Hammer of Vulcan Slot

The Hammer of Vulcan slot is played with 6 reels, 4 rows and 4,096 ways to win. A win is created by landing 3 to 6 matching symbols on adjacent reels from the leftmost reel to right (i.e. starting from reel 1).

The slot is available for players at all bankroll levels with stake levels ranging from 10p per spin, up to a maximum of £100 per spin. Click on the Total Bet button below the reels and adjust accordingly.

You can run between 10 and 1,000 autospins if required. Click on the Advanced tab for win and loss stop limits. There’s also a turbo mode available.

You’d expect a slot with a volcanic theme to come with volcanic volatility and Hammer of Vulcan doesn’t disappoint on that score. The variance here is very high. On a scale of 1 to 5, the volatility is most definitely a 5. High risks can deliver potentially enormous rewards though, with the maximum win standing at 20,347 x your total stake. 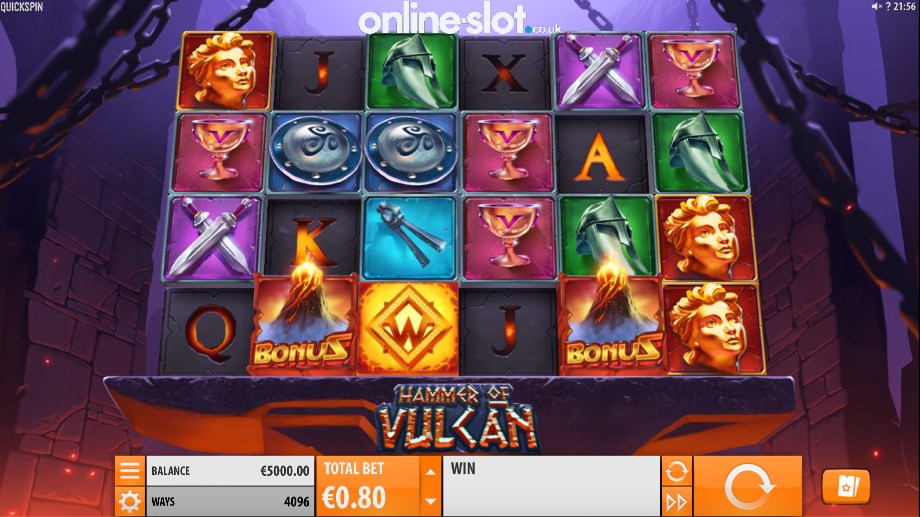 The setting in the Hammer of Vulcan slot is the flaming hot forge of Vulcan, God of Fire, which is buried deep below Mount Etna. With a Greek mythology theme, the sound and visuals are terrific as always. They’ve got a great reputation for design flair and it’s easy to see why. The soundtrack is heavy metal and compliments the fiery theme.

The reels are made up of stone A to 10 royals which appear alongside tongs, a shield, a helmet, swords and a chalice. The golden Golem is the most lucrative symbol. Land 3, 4, 5 or of these on adjoining reels on the same spin for an award of 2, 4.5, 6 or 12 x your total stake.

Those same amounts are on offer from the wild which also substitutes for all the standard symbols. Vulcan brandishing a mighty hammer is the hammer wild. This triggers the Hammer Wild feature which we’ll look at in detail below. The volcano is the bonus scatter.

Hammer of Vulcan is available to play on all devices including desktop, tablet and mobile. The superb design makes it very easy to play on a small screen devices.

Bonus Features in Hammer of Vulcan

The fiery theme of the Hammer of Vulcan slot is matched by some potentially volcanic features. The range isn’t massive but these extras can really pack a payout punch. They include the Hammer Strike feature which can turn whole reels wild as well as a Light the Forge Free Spins feature.

The Hammer Strike feature triggers every time you land a Hammer Wild symbol. All of the symbols below the triggering wild also turn wild and a payout calculation follows with all the wilds in position. The Hammer Wilds become even more powerful when they land during the free spins. 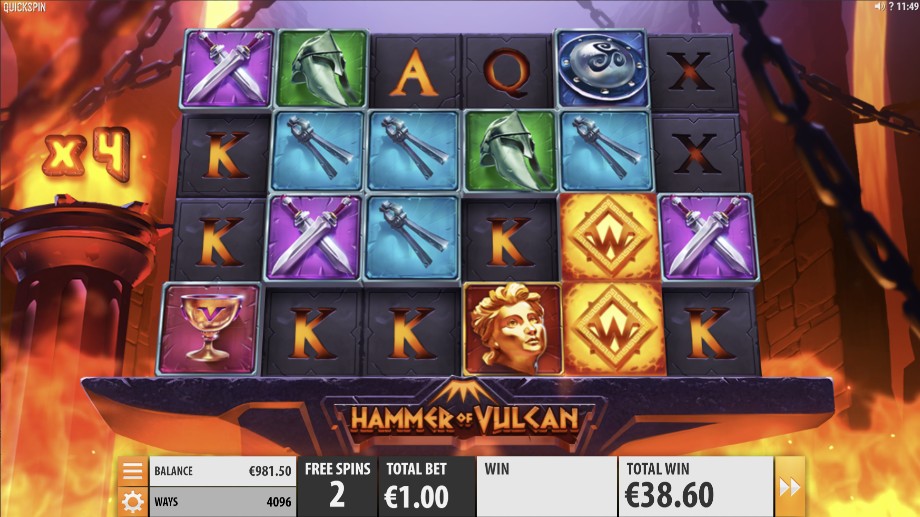 The main feature in Hammer of Vulcan is the Light the Forge Free Spins feature. It’s triggered in the usual manner by landing 3 or more volcano scatters anywhere on the reels on the same spin:

If you last free spin doesn’t result in a winner, you’ll activate the Strike Again feature. The reels spin again until you do eventually create a winning combination.

In some territories, you’ll have the option to buy your way into the Light the Forge Free Spins feature via the Buy feature. This will cost you 80 x your total stake. The number of volcano scatters that land changes each time so there’s no way of knowing how many free spins you’ll get if you do decide to buy your way in.

Quickspin’s usual formula has been to create stunning looking slots that offer simple but volatile gameplay. The Hammer of Vulcan slot ticks all those boxes. Visually, it’s superb. The gameplay isn’t overloaded with extras but the expanding wilds, free spins and expanding multipliers offer plenty of action.

It’s super fiery too with the volatile in the very high range. The key to big wins is from the increasing multiplier in the Light the Forge Free Spins feature. Just hope you get plenty of Hammer Wilds to do so. Put all that together and we’re happy enough to recommend giving Hammer of Vulcan a bash.

If you want volcanic style action, the Jackpot Giant slot by Playtech is simpler but offers you the chance of winning a 7-figure progressive jackpot. Another option is Play ‘n GO’s Gold Volcano slot which is played on an 8×8 grid and offers 10,000 x stake wins.

What is the Hammer of Vulcan RTP?

The Hammer of Vulcan RTP is 95.81% which is a little on the low side. It is highly volatile though with most of the wins coming from the 2 main bonus features.

What is the Hammer of Vulcan max win?

With a fiery theme and variance, it has the payouts to match. The most you can win from a single Hammer of Vulcan spin is 20,347 x your total stake. This will come in the free spins where there’s an increasing multiplier.

Is there a Hammer of Vulcan free spins feature?

Yes, trigger the Light the Forge Free Spins feature by landing 3+ volcano scatters and you’ll play with up to 20 free spins. Hammer wild symbols add extra wilds and also increases a multiplier each time is hits. Re-triggers are possible here too.

How does the Hammer Strike feature work?

When a Hammer Wild lands, the Hammer Strike feature is triggered. Vulcan then hits the hammer with symbols below the Hammer wild also becoming wild. This also occurs in the free spins and increases the multiplier by 1.