Head back in time to the land of ancient Greece in the Guardian of Athens slot, a superbly designed classically themed game from Quickspin. This 5 reel, 20 payline title has an antiquated look to it but the gameplay is bang up to date. The highlights being multiplier wilds and free spins. Trigger the free spins round and you’ll have the pick of 4 different free spins and multiplier combinations. Choose the riskiest combination and the multipliers can combine to send payline wins rocketing by up to 1,680x. Find more about this extremely volatile slot in our full Guardian of Athens review.

Where to Play Guardian of Athens Slot

The set up in the Guardian of Athens slot is a classic one (to match the classical theme). The action plays out on a 5 reel, 3 row, 20 payline machine. Create a winning combination by landing 3, 4 or 5 matching symbols or wilds on a payline from left to right, starting from the leftmost reel.

Stake levels here start at 20p but can reach £100 per spin. Click on the Total Bet box below the reels then scroll until you find your required stake.

The Guardian of Athens RTP is 96.58% which is better than average. 67.94% of wins will come in the base game with the remaining 28.64% from the free spins. This ancient adventure is a high variance one. On a scale of 1 to 5, we’d put the volatility at the maximum 5.

The most you can win from a single spin here is a massive 16,003 x your total stake per spin. This will come in the free spins where the multiplier can reach 1,680x. 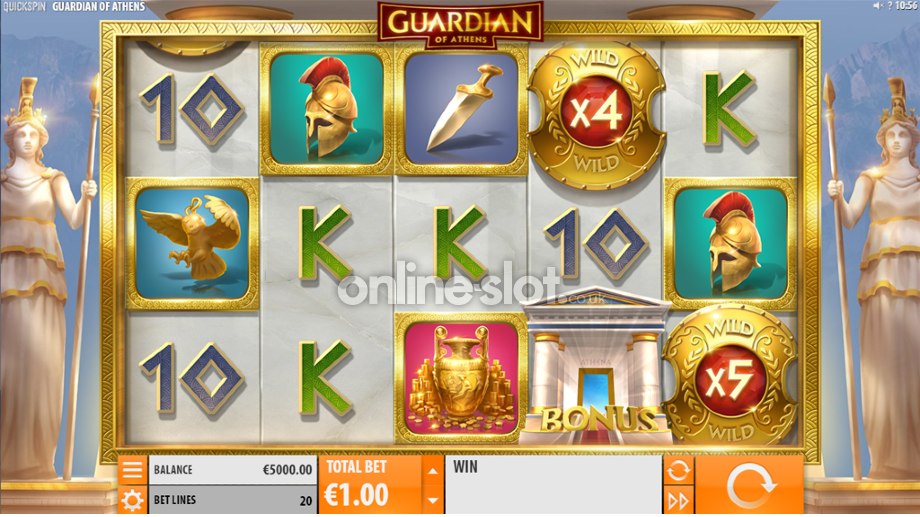 As you’d expect from a game set in ancient Greece, the Guardian of Athens slot is all togas and marble as far as design is concerned. Very impressive it is too. The visuals here are full of heft and are very impressively done. There’s a rather understated soundtrack to accompany the action. It’s not overly intrusive and works well enough.

Flanked by a pair of majestic statues, the reels here are made up luxurious marble. There, you’ll find A to 10 royals alongside a dagger, an eagle motif, a warrior’s helmet and a cornucopia full of coins. The top symbol is the golden vase which awards 1.5, 3 or 7.5 x your total stake if you land 3, 4 or 5 on a payline.

There’s also a standard shield wild that can land on reel 1 as well as multiplier wilds which can appear on the other 4 reels. There’s also a scatter symbol.

As usual for a Quickspin slot, payout amounts in the paytable are shown as cash amounts rather than coins which makes everything super simple to follow.

The high-class design in the desktop version is present and correct in the Guardian of Athens mobile slot. You’ll find the same simple, volatile gameplay in the tablet and smartphone versions too. It works very well on the smaller screen.

The 2 main features on offer in Guardian of Athens are multiplier wilds and free spins. They can combine to spectacular effect when you trigger the Fate Bonus feature.

The shield symbol is the wild. These multiplier wilds can appear on all 5 reels and substitute for all the standard symbols when they make up part of a winning combination.

These shield wilds can also come with multiplier values attached which can boost your payout by 2x, 3x, 4x, or 5x. The value of the multiplier is equal to the reel that they land on. For example, a shield wild on reel 3 awards a 3x multiplier and trebles that payline win.

Known as the Multiplier Wilds feature, landing more than 1 shield wild in the same winning combination and the values of the multiplier are combined to give an even bigger boost. For example, landing 3x and 4x shield wilds on reels 3 and 4 would send the payout from that payline win rocketing to the tune of 12x. You can benefit from a 120x multiplier on every base game spin. 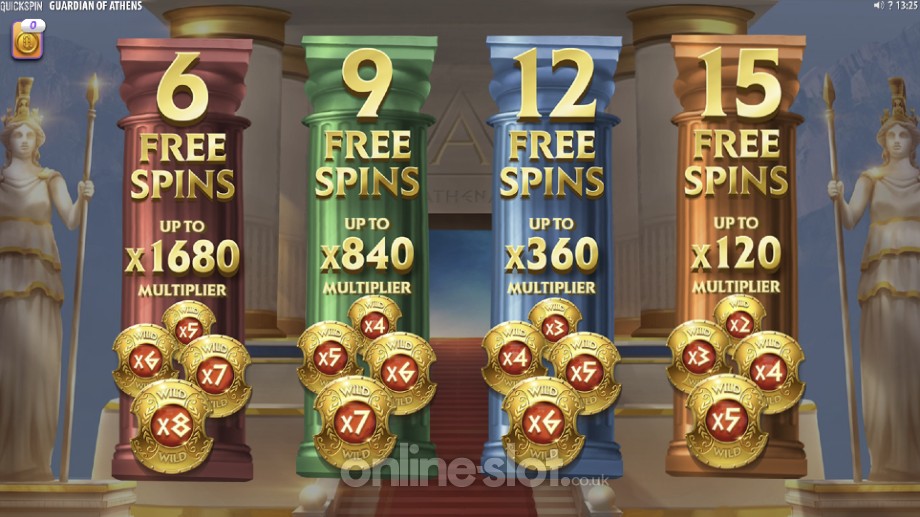 The marble building is the game’s scatter symbol. Land 3 marble building scatters on the middle 3 reels on the same spin to trigger the Fate Bonus feature. You’ll then have the choice of the following 4 free spin and shield wild combinations.

Options for fewer free spins have a higher risk but come with the upside of bigger win potential. The multiplier wilds appear on reels 2, 3, 4 and 5. They appear in the order shown in the table below. The option you pick will affect the maximum multiplier and your max win per free spin:

Guardian of Athens Review Summary – all about multiplier wilds

I’ve donned our virtual sandals and toga in plenty of similarly themed games. The Guardian of Athens slot is actually a clone of the Eastern Emeralds slot released by Quickspin in 2018.

Saying that, it offers something a little different because of the shield multipliers which can combine to deliver some massive awards if you manage to land more than 1 of them in the same winning combination. In the base game, you can play with 120x multipliers.

This game is all about the Fate Bonus feature where multipliers can reach 1,680x. Make sure to pick the 6 free spins option as you could pocket 16,003 x stake wins a free spin.

In summary, Quickspin’s usual design flair is clearly evident here too. The potential for big wins is good and the RTP of 96.58% is also high. If you want options from your free spins, Microgaming’s Immortal Romance has them as it offers 4 free spins options based on each of the characters.

What is the Guardian of Athens RTP?

The Guardian of Athens return to player rate is 96.58% which is well above average. With most wins coming from the base game (67.94%), the bigger wins will come in the free spins due to the multipliers.

What is the Guardian of Athens max win?

The maximum win is 16,003 x your total stake per free spin. This is available if you pick the 6 free spins where multipliers can combine up to 1,680x.

Are there any Guardian of Athens free spins?

How does the Multiplier Wilds feature work?