The Artemis vs Medusa slot is powered by Quickspin and comes with 5 reels and 1,024 ways to win. Playable from 20p a spin on all devices, it has a Greek mythology theme as Greek goddess Artemis takes on gorgon Medusa in this epic battle. It comes with Bounty Coins which give you cash prizes and an Unlimited Battle Free Spins feature where medium value monster symbols are removed from the reels until all are gone. This stops the free spins. The RTP is 96.17% and the max win is 5,288 x stake per spin.

Where to Play Artemis vs Medusa Slot

The Artemis vs Medusa slot is played on a 5 reel, 4 row set with 1,024 ways to win. A winning combination is created when you see 3, 4 or 5 matching symbols from left to right on successive reels beginning from reel 1.

Available to play from 20p to £100 per spin, there’s a Turbo Mode button to speed up the spins. The Autoplay function allows between 10 and 1,000 autospins. You can click on the Advanced button to set loss and single win limits if desired.

Medium to high variance and rated as 4.4 out of 5 by Quickspin, the bigger wins will come in the Unlimited Battle Free Spins feature. The max payout is 5,288 x stake per spin. 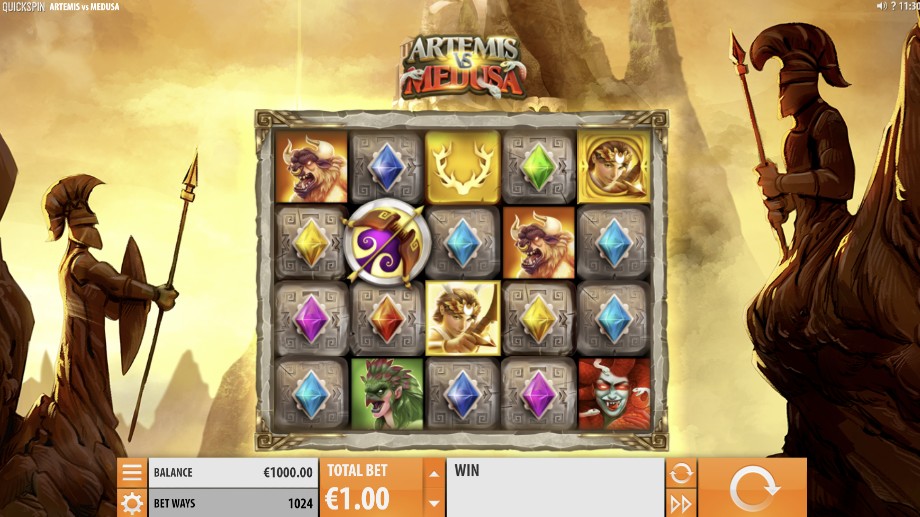 The Artemis vs Medusa slot has a Greek mythology theme and sees Greek goddess Artemis take on gorgon Medusa. They do battle with Mount Olympus is the backdrop – it has an epic feel. Beautifully designed and with high definition graphics, the soundtrack could be out of a blockbuster film.

On the reels you will see 6 low value gemstones which are in different colours. The higher value symbols are represented by Artemis’ helpers Harpy, Griffon and Minotaur. You also have gorgon Medusa. The most valuable symbol is Artemis as she gives you 2, 8 or 25 x stake for 3, 4 or 5 in combination. The golden antler symbol is the wild and substitutes for all symbols except the bonus scatters.

All Quickspin slots use HTML5 technology and Artemis vs Medusa is no different. This means you can play it on desktop, mobile and tablet devices. If you like to play on your smartphone, you’ll be happy to know that the Artemis vs Medusa slot is available in portrait mode for a better playing experience.

Bonus Features in Artemis vs Medusa

The Artemis vs Medusa slot has 2 bonus features. There are Monster Bounty Coins which give you prizes when Artemis lands with a golden frame on the last reel. Then you have the free spins where the free spins continue until Artemis finishes his battle with Medusa.

Any medium value symbol (Harpy, Griffon, Minotaur and Medusa) can have a Monster Bounty Coin in it. These only appear in the base game.

If the Artemis symbol with a golden frame land on the last reel, any Monster Bounty Coins appearing anywhere on the reels will be collected and a Bounty payout is awarded. Known as the Monster Bounty feature, the payout relates to the value of the medium value symbol that the coin originated from. 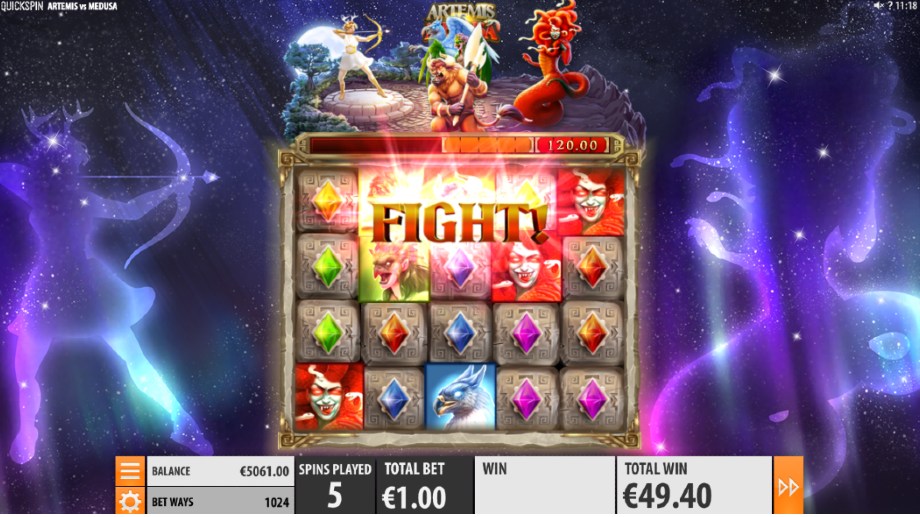 Keep an eye out for the bow and arrow symbol as this is the bonus scatter. It appears on reels 2, 3 and 4 only in the base game. When it appears simultaneously on the 3 middle reels, you will activate the Unlimited Battle Free Spins feature. With no set number of free spins, the feature lasts until the Battle between Artemis and Medusa is resolved.

If the meter exceeds 15 at any time, Artemis retreats and the free spins finish. The free spins will also end if Artemis destroys the last monster.

The Artemis vs Medusa slot is one of the best designed games we’ve ever come across. It is truly epic from the graphics to the soundtrack. The gameplay is simpler than it looks with bounty coins to key to winning big.

The Unlimited Battle Free Spins feature can give you lots of free spins until Artemis destroys all monsters or the meter exceeds 15. If you want to play Greek mythology games, the Age of the Gods slot by Playtech is as good as they come with 7,000 x stake wins on each free spin and 4 progressive jackpots.

What is the Artemis vs Medusa RTP?

What is the Artemis vs Medusa max payout?

The most you can win from the Artemis vs Medusa slot is 5,288 x stake per spin or free spin. The chances of winning this increase in the free spins feature due to the bounty payouts.

Where can I play the Artemis vs Medusa slot?

The Artemis vs Medusa slot can be played at casino sites offering Quickspin slots. Check out our recommended Quickspin casinos which offer other Quickspin slots like Sticky Bandits and Golden Glyph.

Is there a Artemis vs Medusa mobile slot?

Yes, Quickspin creates all slots using HTML5 technology meaning they can be played on mobile, tablet and desktop devices. However, there is an Artemis vs Medusa portrait mode slot version which looks better on smartphones.